Who knew â€“ did you? â€“ that Rapala is in the beer biz, and has been since 2008. The company seems to be a partner in Lakemaid (maybe a play on “Lakemade”?) Beer.

More on the beer from a Lakemaid press release:

> “Sold throughout Cabin Country (Minnesota, Wisconsin, Michigan, North Dakota, South Dakota, Nebraska and Iowa), Lakemaid Beer is available for a limited time only, from the time that the lakes in the North Country open up [when’s ice out, July??] until supplies last, typically through mid-September [ice back in!]. In fact, because of anticipated demand for Lakemaid Beer, the Schellâ€™s Brewery is urging fishermen to contact their local liquor stores now to place their orders for Lakemaid Beer as only a limited supply of Lakemaid will be brewed for the 2010 fishing season.”

> “Launched in 2008 by Rapala, known for its legendary Rapala fishing lures, and Schellâ€™s Brewery, the second-oldest family owned brewery in the United States, Lakemaid Beer was welcomed with open arms throughout the country. The response was so overwhelming that Lakemaid Beer sold out almost immediately in some areas and beer retailers had to maintain waiting lists of thirsty anglers who wanted their Lakemaid Beer. The beer is sold in independent liquor stores and some selected lake country bars and resorts.” 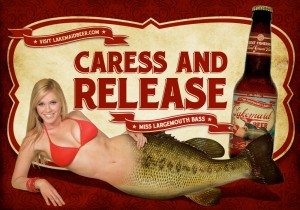