I like Bowman. We met many years ago at a B.A.S.S. Masters Classic (what it was called back then). He’s a friend, good at what he does, and getting in the AR Outdoor Hall of Fame is a big deal. That’s why I conducted this deadly serious interview with him, in which we cover the finer points or Russian politics and how too cook a skunk. Or not.

My comments in [these] — mostly because I can’t resist, but also for some key insight. Or not.

Me: What percent of your outdoor media life has been about bass fishing — and is that a good thing?

Bow-man: I would say the biggest percentage of my outdoor life has been centered around bass fishing. That percentage has obviously gone up in the last 15years since working for McKinnis, but even before that I recognized the power of the sport. When we head to Grand Lake for the Classic, it will be somewhere in the neighborhood of 30 straight. [Pretty sure this makes him older than me…I hope.] 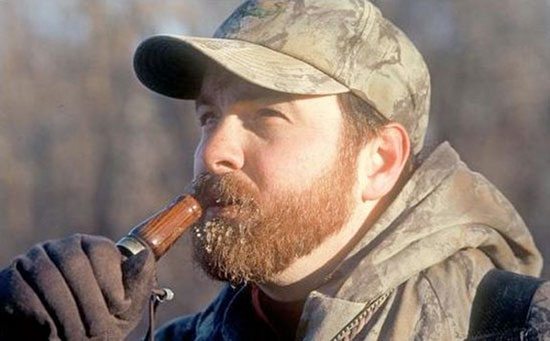 Guess Bowman did have a non-grey beard at one point….

One of the things I saw early on while at the newspaper was the passion combined with the competitiveness of some truly great anglers like George Cochran, Larry Nixon, Ron Shuffield, Ricky Green, Mike Wurm, Mark Davis, etc — all of them friends and mentors.

I always felt that hunting and fishing were God’s sports [I love that!], and continually made a case they needed to be covered in the same way other sports were covered.

That was my deal and I’ve never gotten off that focus, which is why I hope you see such in-depth coverage of a bass fishing tournament today as opposed to what it was years ago.

Is all that a good thing? I think so. I love fishing and just being able to work on it in the manner I have has been very fulfilling for me. But I wouldn’t say it’s the only thing that has defined me.

Would you rather hunt ducks or fish for bass?

I would rather turkey-hunt. If it was turkey season year round, I might not ever come out of the woods. Mainly because I get to have a conversation with a wild creature — I get that in duck hunting too.

But I love everything in the outdoors. We have these great seasons and I want to take part in all them. I get a charge out of bowhunting for deer. Overstreet and I, when we were kids, we thought of ourselves as the Rick Clunn and Larry Nixon of frog gigging. We did it all.

Bowman and Overstreet are now the bass fishing equivalent of frog-giggers. Or something like that….

Bass fishing is a lot like turkey hunting. You understand the goal when you get on the water, and you send out messages by using baits instead of calls, trying to figure out what they want, peel back layers of how they will respond and then act accordingly.

As outdoor writers we often say we “trick” or “fool” a fish into biting. But for me it’s figuring out the language they want to hear and where they want to hear it. So any wildlife sport that has that mix in it is at the top of my list. Bass fishing is a lifestyle for me, more than a hobby or a season. [This is so true that to give the impression that it’s hard work, Bowmn likes to be all grumpy at Elite events.]

For the decades we’ve known each other, you’ve always been a Southern curmudgeon who only called me by my last name. Why is that and is that how you are with everybody?

Kumar is just a cool name. I live in the South. There are plenty of “Jays,” but few Kumars. That’s your identity. Believe me I could come up with far worse things to call you. I’m pretty creative in that regard. But we will stick with “Yank” and “Kumar” for the benefit of all. Everyone should have an identity.

My wife, by the way, refers to me as “Bowman.” I refer to her as “sugar dumpling.” Not really, she would slap me.

I think it’s funny that a Yankee would call me a curmudgeon. Maybe that’s because when I see you the most I’m in Yankee land and around a bunch of curmudgeons and it’s rubbed off. But truthfully, there are times when I have to be stern with those I’m working with and around. There’s always a right way to do things and long list of semi-right things and then a wrong way. [Gonna call all of us who work with Bowman “The Wrong-Way Gang.”]

I like it when we do it the “right” way, and I think I owe it to those who work with me to push them to that place, even if I don’t get there myself.

There’s not a person who works for me that doesn’t want to be the best at what they do, including myself. Some of them, like Overstreet and Wright, are there, the rest of us are working to reach that. All of them, even myself, needs to be reminded of our goals at times. And those reminders can’t be washed down with sweet tea. Especially when we set good, strong goals.

[Wow. Bowman being humble and nice. Hold on I need to head butt the door to make sure I’m conscious.]

I’ve noticed that Overstreet, Wright and the rest of the AR duck gang can be pretty curmudgeonly too. Is that a requirement for employment at JM and if so why do you think that is?

I wouldn’t say it’s a requirement, but it helps. Jerry McKinnis isn’t a curmudgeon [Well…. Just kiddin’ Jerry (and Mike)!] But he can chew your behind better than anyone I know. He demands excellence. So the rest of us try to get there. Since we don’t get there very often, then you get what you get. But I really think I’m a nicer than average guy.

Overstreet and Wright maybe not so much.

I’m kidding — only slightly. Then there’s the fact that maybe it’s just you, Kumar. If we could get you to take a little dip of Copenhagen and chill you out a bit, then maybe the world would look different to us all. [The world would fer sher look different if I was turning green.]

Do you think your awesome outdoor career would have been possible without…Mountain Dew?

Heck no. I’ve spent too many long hours when I needed the caffeine to stay awake. Not to mention Diet Mountain Dew and Copenhagen together are like honey and butter.
_____

Hahaha! Much appreciated man! A little more serious than I thought, but hey — we’ll take it.