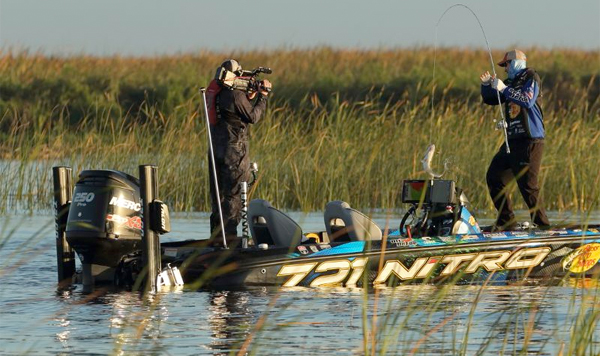 Ott fished three areas — one north, and two south that were within 5 miles of Uncle Joes Cut.

> “It was a shad spawn deal I found the first morning of practice. I saw birds diving in the grass. I went over there and fish were blowing up all over the place. I got out the Terminator Frog and caught a couple 2.5s and 3s in the first 10 minutes. The fish were going nuts.

> “It had some dollar pads, some cane and some tules, but the dollar pads were what the shad were using to spawn on….” Water depth = 3′.

> “[#2] wasn’t an outside line and it wasn’t the hard bank line, it was in between. It had thick Kissimmee grass and patchy reeds, and I had 5-6 bites through there, flipping. I caught 3-4 of them, but a couple of the ones I didn’t catch felt really big. On that stretch the first [competition] day I caught two big ones.”

> 1 fish (the 8-06) was on a Terminator Popping Frog, but the rest are on the not-yet-released Terminator Walking Frog Jr (smoke silver shad).

> He walked the bait “kind of fast. It was definitely a reaction bite with that shad spawn going on. For every fish you’d catch 10 would blow up on it. The first couple days I was jerking like crazy — I’m terrible at topwater fishing.” 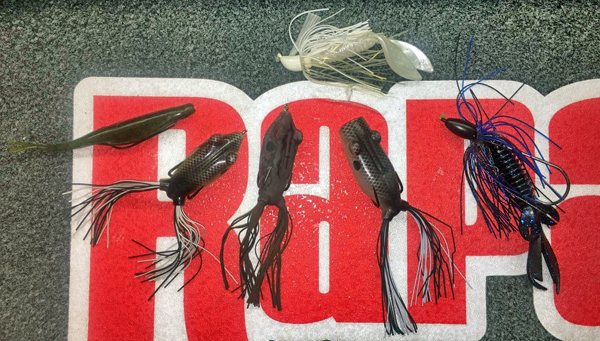 > Bay with dollar pads: Frog Jr (cocoa camo) or dead-sticked weightless BPS Shadee Shad (Fluke-style, gp). “Where the dollar pads were thick I fished the frog, and where they were thin the Shadee Shad.”

> Flip area had “reeds and thick Kissimmee grass, matted up. I’d pitch in there and probably 75% of bites they had it when I first lifted up. Others came after 1-2 bounces.”

> “Anytime you have a shallow-water tournament, Talons [pole anchors] are always a big deal when you’re trying to sit still and pick areas apart.

> “The HydroWave is something I turn on every morning and run it all day. People might get tired of hearing about it, but I have a lot of confidence when I turn it on.

> “My Atlas Jack Plate…with the water level where it was, in a lot of places if you didn’t have a hydraulic plate you had to idle another 1/4-mile before you could get up on plane.”

2nd-4th baits and patterns from the Cherokee Elite
Tim Horton’s Okeechobee winning bait and pattern
To Top
We use cookies to ensure that we give you the best experience on our website. If you continue to use this site we will assume that you are happy with it. Cookie settingsACCEPT
Privacy & Cookies Policy