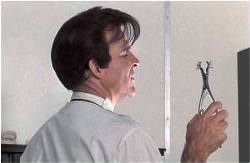 Watching anglers remove hooks from the jaw of a largemouth bass can be pretty enlightening. Seems everybody has their favorite technique. Some reach for the long-nose pliers, while others do that fancy â€œpop the hook with the palm of your handâ€ thing. Youâ€™ve seen it done â€“ just donâ€™t know who in the heck invented it – brilliant though. Weâ€™re all kind of like pseudo-dentists, minus the 10 years of advanced medical training necessary to perform our extraction magic on other people.

Well, a very cool study was recently published concerning largemouth bass hook removal technique and effects. “Effects of Four Hook Removal Techniques on Feeding, Growth, and Survival of Deeply Hooked Largemouth Bass” by DeBoom, et al. (“and others”)Â took a scientific look at several common hook removal methods. What makes the study so neat is the intentional inclusion of the “through the gills” removal technique made popular by a Ralph Manns piece back in 2002 in In-Fisherman magazine, and revisited by Doug Stange some years later. The study authors even went so far as to use the exact same hook style in their testing as was done in the original publication piece. A browsing of bass fishing forums finds that this is a pretty popularÂ method for deeply hooked fish.

The study involved a control set of fish that were hooked in the oral cavity (thatâ€™s science geek talk for “the mouth”), but not deep, as well as the deeply hooked fish that were given 4 treatment types:

After all the testing was complete, fish wereÂ first held for 6 days to assess short term feeding effects and 24 hour mortality, and then placed intoÂ ponds and checked in both the summer and the fall for long term feeding and growth. Results included:

The authors concluded, “Overall, our results suggest that deeply hooked largemouth bass caught on hooks comparable to those used in our study have a similar probability of survival regardless of method of hook removal and can have rates of catch-and-release survival similar to that of fish hooked in the oral cavity.”

So keep up the good dentistry on our little green friendsÂ Bass Paraders, whichever particular method of hook removal you choose to use.

Sponsor Deals: Any of Our Business?
A Couple Cons of Ice Fishing