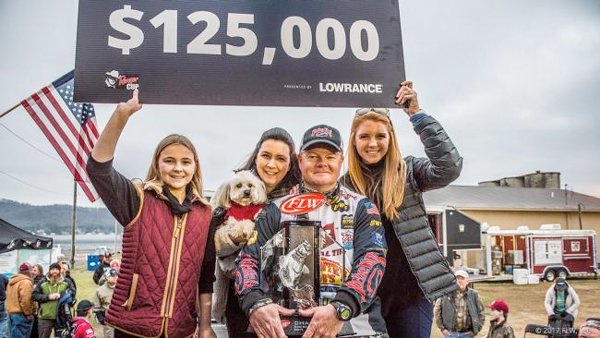 Mark Rose squeezed out a win at last weekend’s Guntersville FLW by less than a pound over Bryan Thrift. He did it by camping out on Browns Creek because of…seagulls:

> “When first came into town, the seagulls were in that creek by the thousands, all along the causeway…gave me a good feeling that a lot of bait was in there and a good migration of fish….

> “When I went to fish that causeway the first day, I could hardly get the crankabit through there without hooking some big old gizzards.” [That’s the deal on the TN River.]

Said he had “about 7 sweet spots in that creek. Three of them were rocky and the rest were grass — inside grasslines or guts. I’d hit them around 3 times per day. Slow, methodical, always using the causeway as a resting time to let everything settle down.”

> “Those old flat-sides are really good cold-water baits…tight wobble. I have about a dozen of them and only break them out when it’s cold.”

> “I fished that in a couple drains — guts going up into spawning flats. I was sitting up deeper and throwing shallow…reeling it real slow, ticking the grass in 4-5′.”

> “I’d mostly pick it up and hit grass flats…ticking the tops and and pulling it through [in 2-4′].

> “I was hunting those few fish that pull up early every late winter, the early ones that move shallow. There’s always a few big ones that do that, especially when the sun comes out.”

Rest of the baits

Mark used other baits as well. Here’s the whole arsenal including the above 3 rigs: 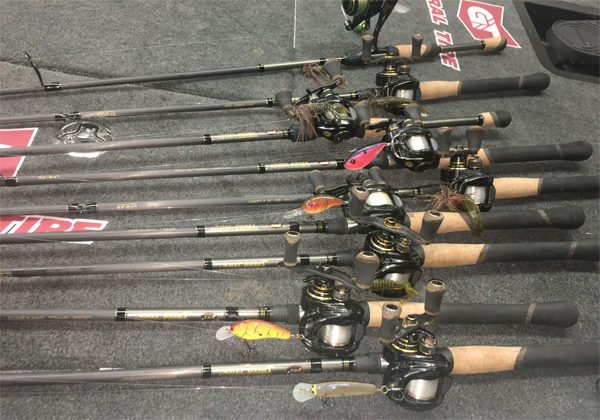 > Shad-color Strike King Custom Shop Flat Shad — he only made one cast with it but it was the winning fish.

> He colored the tips of all plastics with an orange Spike It marker. “I wanted those baits imitating crawfish even though the water was in the high 40s. I wanted them to be the first crawfish the fish got to see this spring.”

> Mark is an absolute hammer on TN River lakes. Why: “I just like ’em. I grew up on the Mississippi River, and a lot of the habitat is similar. I grew up fishing current and understanding current….”

> But he also often fishes deep: “Usually when I’m on the TN River spend a lot of time deep trying to find a little needle in a haystack. But I just had a shallow instinct on this one…. Sometimes you need to know when to turn your depthfinders off and just go fishing.”

> “The Garmin LakeVu HD maps have that lake nailed so I was able to look at all these little nuances…. I was able to not have to run to [many] areas to find fish. It cut down on a lot of idling….”

Greg Hackney cranked ’em at the Atchafalaya
Jacob Wheeler’s Cherokee Baits and Patterns
To Top
We use cookies to ensure that we give you the best experience on our website. If you continue to use this site we will assume that you are happy with it. Cookie settingsACCEPT
Privacy & Cookies Policy