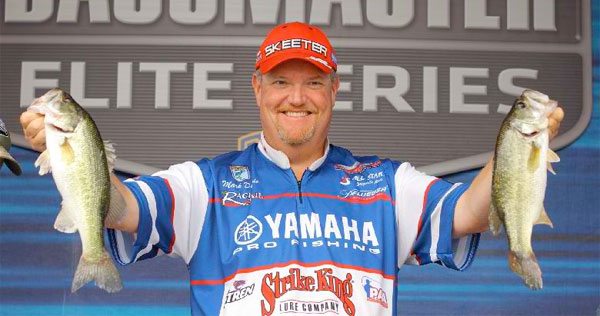 Even though it’s September and the next major move bass make will be into shallow creeks and bays, Mark Davis still has a deep-diving crankbait tied on. For him, the deep cranking season will continue for at least another month.

“It’s been an extremely hot summer across much of the country, and the water temperature in most lakes is still pretty warm,” says the Yamaha pro, “so neither the bass nor the baitfish seem to be very anxious to move shallow. They’re going to remain in deeper water until the lakes start cooling. And until they do, a deep-diving crankbait will still be one of the best lures to use to catch them.”

Deep-cranking depths between 10 and 18 feet is not an easy one to master, but Davis began using the presentation more than 30 years ago as a guide on Lake Ouachita, AR. Today he’s considered one of the best deepwater crankbait fishermen in the sport.

“There are some shortcuts to deep water crankbaiting I’ve learned over the years,” he says, “but it took me a long time to accept them. Probably the most important one is not to even start casting until you know what you’re fishing.

“About 90% of the time, deep-cranking is about fishing some feature in deep water, such as a ridge, a hump or a channel, and you really can’t fish it effectively until you know what it looks like.

“I always idle slowly over the structure and study it with my electronics. Today’s depthfinders and side-scan units will show you the shape of the structure, how big it may be, and provide clues on how you can fish it most effectively.”

He’s not always looking for bass. Instead, he concentrates on trying to identify some smaller, special spot on the structure that might attract and hold a school of fish.

“One type of sweet spot I always try to locate is an area of hard bottom — particularly important on older lakes where silt usually covers most of the bottom. A hard bottom can be rock, gravel, a shell bed or even just smooth clay, but it will show up very well on today’s electronics and isn’t hard to identify. When I find hard bottom like this, that’s what I’m going to fish.”

Initially Mark keeps his lure choice as simple as possible, choosing either a shad or chartreuse-colored Strike King crankbait capable of diving deep enough to reach that hard bottom with a long cast and light, 10-lb line. If the hard bottom or cover is deeper than about 20 feet, he may use long-lining to get his crankbait 8 to 10 feet deeper.

“Boat positioning is an important part of deep cranking, too. I want to be as far away from my target as possible, but still get my lure down to that target. I’ll also experiment with casting angles, circling the spot to see if the bass want my lure coming from a certain direction.

“Most of the time, I’ll have my boat in deep water and cast shallow, but sometimes it’ll be just the opposite, and I’ll usually learn this by making a complete casting circle around the target.

“Deep-cranking doesn’t have to be that difficult or that complicated,” he says, “especially if you learn as much as you can about the structure before you start trying to fish it. In fact, with the quality of today’s electronics, deep cranking has probably never been easier.”