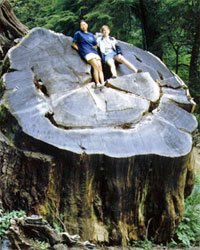 Ever notice that KVD likes stumps? Everyone does, but he seems to talk about them a lot. Here are a few examples culled from various interwebz articles:

1. He Likes Stumps More Than Rocks…

…and his reasoning is simple:

Stumps are always better than rocks because their roots provide cover for bass and baitfish.

Tough to argue with that â€“ or with KVD about anything, except drinking diet soda….

2. When It’s Cold, Stumps Are Warm

Talking about the the 2009 Elite on Lake Dardanelle, Ark., March 26-29 during tough conditions, he said:

…Because the temperature was cold, the bass had moved to the stumps for warmth.

3. Find Stumps With Your Bait, Mark ‘Em Eyes Only

KVD on his 2011 Classic patten: His technique was to motor within casting range of a group of stumps, and put his PowerPole down. Heâ€™d then fan cast to the stumps.

I was ripping the grass off the bait constantly. I was using the bait to feel for stumps and feel for grass. I culled several 20-pound bags to catch what I caught (Sunday).

On the final day, first thing, I made four casts to the same stump and boom, caught a 6-pounder. I would go to the areas I knew had clusters of stumps and drop my Power-Pole.

He was using a KVD 1.5 square-billed chartreuse/black back crankbait: â€œWhen bass get [in spawn mode], they donâ€™t like bluegill around them, so you really want to fish chartreuse/black.â€