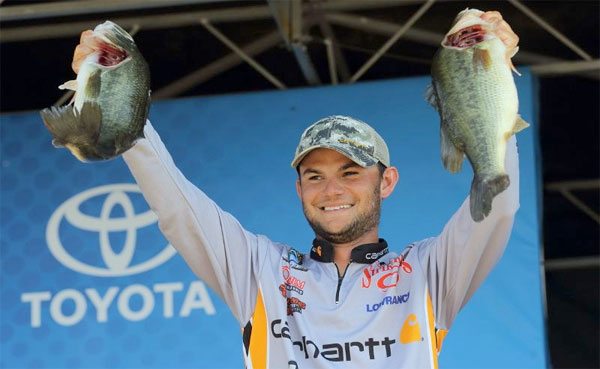 Jordan Lee started the Bassmaster Elite at Cayuga dropshotting for bedding smallmouths, but ended up catching largemouths in the northern end of the lake. Here’s how he did it.

> “I weighed in 7 smallmouths out of 20 fish. I was dropshotting beds — that’s how I caught my limit of fish day 1, and I caught two the second day doing that. After that was done, I tried to look around for more smallmouth but couldn’t really find any.

> “The second day I was largemouth fishing in an area where we [including his brother Matt] got a couple bites in practice. Just 3-4 bites in one little area. We talked after the first day, and he actually caught a lot of fish in that area, just not any big ones.

> “I went to that area — but not that exact spot — on the flat and started pitching my dropshot. I was using a hand-poured worm, and was just flipping that worm in holes in the grass in about 8-10′.

> “As soon as I pulled in there I caught a 3-something and then one over 5, and one right at 5 in about 20 minutes. So I knew that was the right choice, and was something I could do for the next day at least.

> “That really got my confidence up right then that that was the deal, especially when I knew the fishing was going to be tougher because the bed fish were going to get caught.

> “Days 3 and 4 I pretty much did the same thing. I fished some different areas out there on that flat — it seemed like there wasn’t one spot I could sit on. I had to really cover a lot of water and find some new fish. That’s what I did the third day.

> “The fourth day got a lot tougher for me. I didn’t get near the number of bites, but it’s all I had to do. It’s what I had confidence in — I didn’t have any other areas where I thought I could catch 4-lbers fishing like that.

> “Toward the end of the day I could tell it wasn’t really happening — the wind was really blowing out there. I could tell the fish weren’t really setting up well. I made some changes and caught a lot of fish off boat docks on a wacky-rigged [Strike King] Ocho. But I never caught any big ones.”