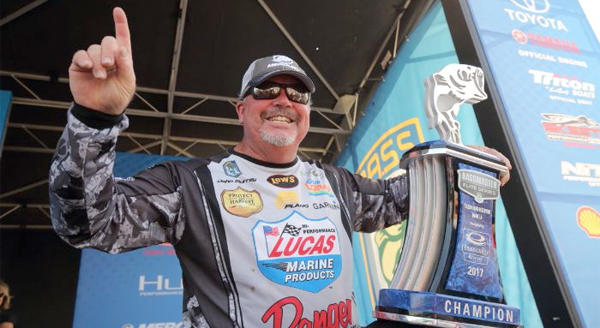 John Murray milked a spot — a long, deeper ridge — that he’d found and fished before on Toledo Bend, including when he won his first B.A.S.S. event there back in 2003.

“Every time I’ve fished that area I’ve gotten a top 25,” he said. “I think I’ve really learned that area well — it’s like having a home lake advantage on one section of the lake.”

He described it as being about aÂ  3-mile-square area that he still hasn’t completely fished. The money spot is a “1/2- to 3/4-mile-long ridge that extends into the lake, basically an old underwater mountain top. It has high spots and flats, a couple drains off it. I’ve seen it when it’s low — it has clay and stumps, and rock foundations. This time the big ones were on those rock foundations.”

> “It has that big rounded lip. A lot of stumps were there, and I wanted a bait to deflect the best it could.

> “In low light like the last day, the crankbait was the way to go.”

Lucky Craft Pointer 128 (chartreuse shad) he got from Skeet

> “It’s big and has a loud, obnoxious rattle. The water was dingy up north where I was fishing, and those fish were eating little white bass on top. A lot of guys were fishing shad-sized lures — I upsized the jerkbaits more than most guys did.

> “I don’t like throwing jerkbaits in dirtier water but it worked up there. In 4.5′ deep you could not see the bottom.” 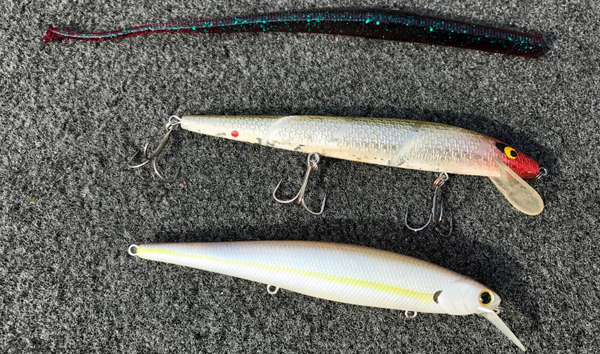 > “Basically I was throwing it at stumps they were spawning by.” He also threw it as a follow bait for missed jerkbait fish.

> “They spawn way out in the middle of lake flats late in the year. I was catching them before they went in there. They were fat little pre-spawners.”

> When he won the Bassmaster Open Championship on TBend in 2003, he fished a 3/4-oz Yo-Zuri Rattl’n Vibe (Tennessee shad) around stumps and dropshotted a 5″ Yamamoto Kut Tail worm on hard structure in 10-20′.

Jason Christie’s 2nd place Toledo Bend bait and pattern
Bobby Lane’s 4th-place Ross Barnett baits/pattern
To Top
We use cookies to ensure that we give you the best experience on our website. If you continue to use this site we will assume that you are happy with it. Cookie settingsACCEPT
Privacy & Cookies Policy