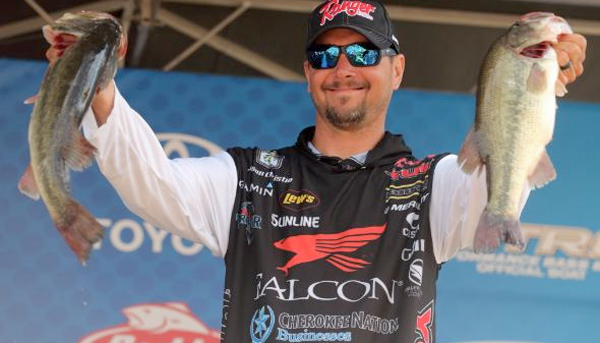 Jason finished 2nd at the Toledo Bend Bassmaster Elite, and wasn’t happy about getting that close and not winning. But he fished a good tournament, particularly since he didn’t have much going.

“I’m a get in an area and grind it out guy, and I just never found an area like that in practice,” he said. “I got a few bites here and there. So I didn’t have a good vibe after practice, but that changed the first morning when I caught that big one [9-10].

“That big one changes not only the day, but the whole event. It gave me a head start. Once I caught that, I settled down and started picking things apart. I was fishing more to win than just do good in the event. Because when I started the event I was actually just practicing — trying to figure it out.

“When I caught that fish, everything went in slow motion and I got to really working things over.”

He caught that fish and almost all the ones he weighed in on a 1/2-oz BOOYAH Blade spinnerbait (chartreuse/white) with double Colorados and a YUM Swim’N Dinger trailer (pearl silver flake).

Jason almost won the 2016 Classic with a similar setup, and the main thing in both cases that he keyed on was dirtier water.

“Wednesday we got a lot of wind and the water got chalky in a lot of places it wasn’t, so that’s where I fished the first day. The next day that area cleaned up quite a bit so IÂ  moved up the lake hunting dirtier water [and did that every day].”

He decided to fish a spinnerbait for several reasons:

2. Lake level — “We had a lake level where a lot of things in the water were just barely in the water…at most 18″. It was so shallow that [it was almost too shallow for a bass to nose down on a flipping bait]. I feel more confident [in those conditions] fishing a bait that’s even with them or a little bit above them. That way I know they’ll see or feel the bait.”

4. Shad spawn — “A little shad spawn was going on and I felt like they’d eat a spinnerbait better than something on the bottom.”

The Colorado blades were silver front/gold back unless he was in super-dirty water (3″ viz), in which case he threw the same bait but with a red front blade — an old Oklahoma trick he has confidence in.

> His retrieve was standard for spinnerbaits: He fished it deep enough to where he just saw the blades.

> Targets were hard ones like the backs of docks, cypress trees, cypress roots, laydowns, buck brush, “anything a bass would spawn on.” The 9-lber was on the lip of a hard edge.

> His flip bait was 1/2-oz BOOYAH Bankroll Jig (“faithful” = black/blue) with a YUM Craw Chunk (black blue shadow) — the same bait he used to win the Dardanelle, AR Elite in 2014.