Jacob “J-Pow” Powroznik had a 4th at the Cayuga Elite, just a mere 3 oz behind Brett Hite. Here’s how he caught ’em.

> “We were going to NY in June, during a full moon, and in the middle of the lake the water temp was 58 degrees. So in my opinion it was a no-brainer: Just about every fish would be up shallow trying to spawn. And within the first 10 minutes of practice I saw 8-10 fish on beds.

> “So that’s what I did throughout the tournament. I fished for bass on beds, and I skipped docks real shallow. The first 2 days, sight-fishing was the only way I caught one.

> “The third morning I caught a big one on a Livingston Walking Boss, and four other big ones blew up on it and didn’t get it. I got on it just a little too late. I was hoping the last morning that topwater would lead to a big bag, but the water got blowing so hard it blew all that cold water into the north end of the lake and it shut the fish down.

> “I caught them the last day pitching holes [in the north end]. It looked like 55-gallon drums sitting out there in the grass. If it hand’t been so windy I would’ve been sight-fishing the whole time. I found a 6-lber in 7′ at the end of the third day — day 4 I started there but I just couldn’t see it.

> [The motor oil color:] “The last time we went up there, a buddy of mine gave me a bag of those worms. He said, ‘I don’t know what is about this color, but they just like it there.’ He’s right. He’s just a buddy of mine and makes them for himself — he doesn’t sell them. 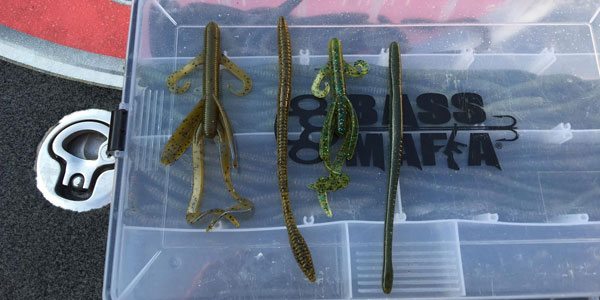 > “I also fished a Texas-rigged V&M Baby Swamp Hog (watermelon candy) and Swamp Hog (gp blue haze) — sight-fishing down in those holes when they wouldn’t bite the dropshot. I used a 5/0 Trokar Flippin Hook and a 1/2-oz Elite sinker for the bigger Hog, and a 3/0 Trokar Flippin hook and 3/8-oz weight for the Baby.

> “Most of the time I’d be right over top of them, where I could see them. That’s why those 10′ Power-Poles were so key. You could lock down and wouldn’t move.

> “My Costa sunglasses were also real important. [He wore Rafaels, sunrise yellow lenses in the morning and amber with silver mirror after that.]

Brett Hite’s Cayuga baits and patterns
How KVD won at the Niagara River
To Top
We use cookies to ensure that we give you the best experience on our website. If you continue to use this site we will assume that you are happy with it. Cookie settingsACCEPT
Privacy & Cookies Policy