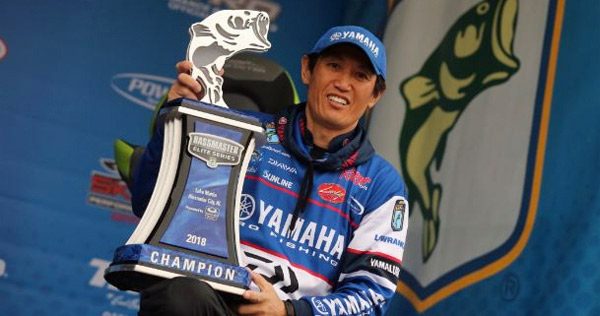 Been a while since Tak won one, but he left no doubt at the Martin Bassmaster Elite, crushing the field by 7 lbs. Here’s how he did it:

> “I was way upriver [fishing for] fish not even locals catch the whole wintertime. Untouched fish, way upriver.

> “I found them Tuesday afternoon — I just tried to run up there as far as I could go to find some big spots. I was up there where you start seeing big rapids — you needed a jet boat to get up there [farther]. I went that far up. There was only 5′ in the main river….

> “A little feeder creek came out to the main river and created sort of a sandbar near the mouth, with kind of a point coming out. I think the fish were trying to go up the creek to spawn or feed, but it was wintertime fishing so most of the fish were still in the main river channel.

> “They were stacked up right there in the mouth of the feeder creek. We had a lot of rain during practice so there was a lot more current during the tournament and the fish just stacked up there in the eddy of that point.

> “Tuesday afternoon, when I found it, I caught 2 fish on back to back casts — 2-lbers — and I felt like it could be something. I thought it could be my starting spot for the tournament because I didn’t have a good practice. But I was worried to run up there for just 1 spot to fish. If there was nothing, what should I do…that’s the [whole] day.”

His main bait was a Lucky Craft 1.5 squarebill (TO craw) with the hooks changed to #3 Gamakatsu round-bend trebles:

> “I did try other baits — spinnerbait, Chatterbait, pitched a jig, a swim-jig — but for some reason they wanted a smaller-profile fast-moving bait. I tried so many different baits during the tournament. I thought maybe I can catch a bigger fish or get more, but the fish told me that’s the bait.

> “I started out at that spot in the upper end of lake. After I caught a decent limit, I’d move down the river to start fishing inside a creek with a flipping jig…a small finesse jig on laydowns, boat docks, rocks.

> “It’s a homemade jig (gp) — I’m not sure of the weight [don’t believe you Tak hahaha! — a guy pours it for him, but Tak does the powdercoat and weedguard]. Yamamoto Double Tail Grub (gp) with orange Spike It dye on the tails.”

> He also did a little regular jig-flipping on braid, and fished a spinnerbait.

> “I use that 9.1:1 reel for everything. You can take the slack out so quick and wind the bait so fast — it’s just more efficient to have a high-speed reel. The 9.1 is not in the US market, only in the Japan market. People don’t understand yet how good a high-speed reel is, especially shallow.”

> At his honey hole he held himself in place with Power-Poles.

> “Last year was my worst season. I got a 108th at Cherokee, then the next one I got 108th again. So after 2 tournaments that was the end of the season. So all off-season I prepared for this season. This is is just a start. We have a long season ahead, and I am super-excited about it.”

> “The last time I fished here was 2002 and I didn’t even go prefishing [this time]. I felt a little confident about the time of year and type of lake — because we usually don’t get pure prespawn tournaments. Usually we start with Florida in March, and the fish are on the beds big-time. I saw this on the schedule and knew it would be wintertime or pre-spawn fishing, and I enjoy that kind of fishing. So I felt pretty good.”

How Bobby Lane won the Kissimmee Open
How Stephen Browning won the Ross Barnett Open
To Top
We use cookies to ensure that we give you the best experience on our website. If you continue to use this site we will assume that you are happy with it. Cookie settingsACCEPT
Privacy & Cookies Policy