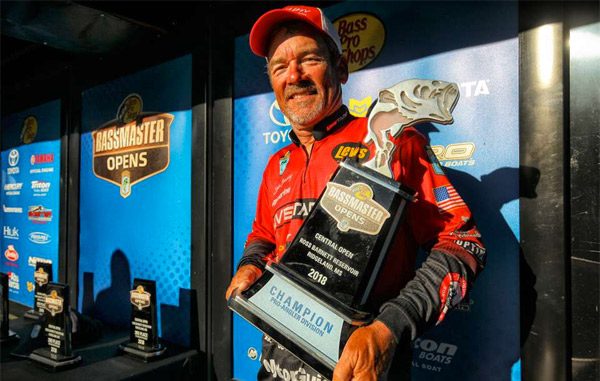 Stephen Browning won the Ross Barnett, MS Open last weekend because of experience. That’s the bottom line. He bet on what he knew about river-type systems and the time of year, and went for it. Deets:

> Barnett, where he finished 5th at the 2015 Open and 2nd at the 2013 Open: “The way it’s laid out reminds me of the lower Arkansas River where I grew up tournament fishing. The whole lake…looks identical to it, all aspects…old oxbow lakes off the main river, spawning flats — everything just sets up like the lower Arkansas River….” [Note: Barnett fishes “riverine” — in BassGold terms — because it’s an impoundment of the relatively shallow Pearl River.]

> “[That means] for me it’s easy to analyze it, to read it. I can eliminate a lot of water before I even get there. I didn’t mess around with a lot of the lake. I got it narrowed down to 3-4 places [before he got there]. Those fish relate to certain areas at certain times of the year. I’ve fished 5-6 events there, and fished the same general areas — I can just relate to those areas.”

> Does that Barnett experience and similarity to the Arkansas River help more fishing-wise or with the mental part: “I knew that that’s the area where that tournament was going to be won. I just knew it — no ifs or buts about it. That’s where the majority of the early spawners come to spawn off the main lake.” 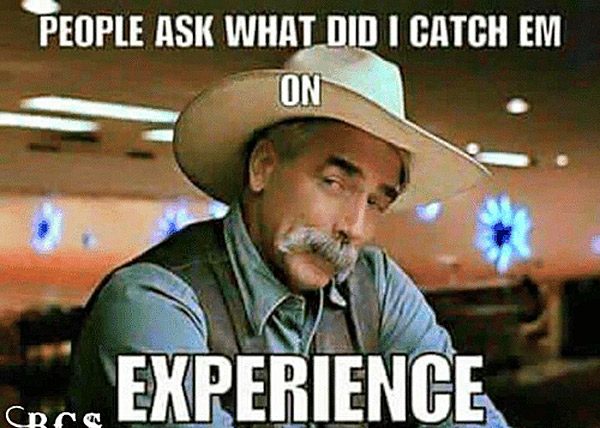 > “Those fish come off that main lake and find that first piece of cover on those shallow flats. They’ll hang out until the conditions really set up for them to move on in.

> “4′ or less, eelgrass flats. I never really noticed that in years past. There’s always been hydrilla or coontail something of that nature — I’ve never seen a lot of eelgrass. 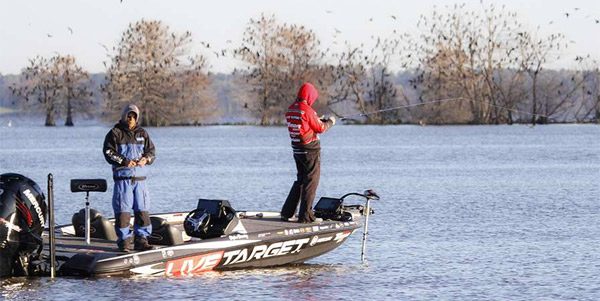 > “[Lots of] buck bass were on the reed line on the bank. I feel like the biggest fish in a body of water will spawn first — the majority of them — and I tried to find where they’d come up and sit down before they went and did their deal on the banks.

> “Once they make their move in, they’ll hang [out on the flats] until it’s their time. In a cold front [like it was for days 2-3] they’ll just hunker down. The only thing that’ll make then run is water level [falling].

> “Most people were fishing on top of the flat and around the reed lines [shallow]. I tried to back out and utilize the outside edge, the place [the big females[ would stop and hang out.” 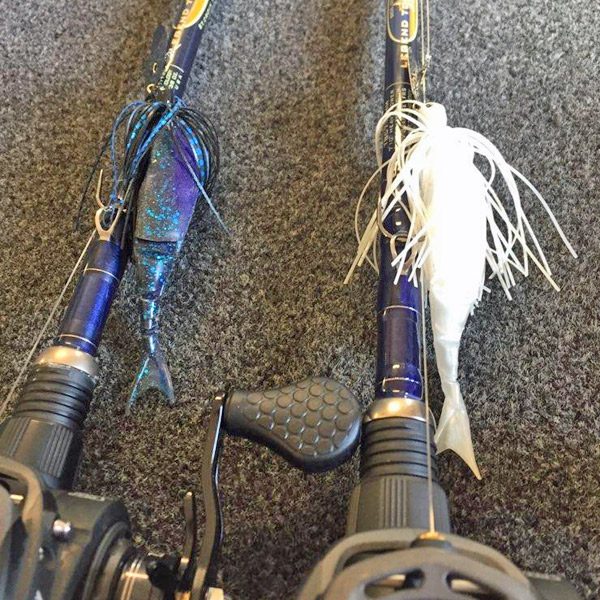 > “12 of the 15 keepers I weighed came on the Jack Hammer Chatterbait — black/blue in the morning, and at about 10:00 when the sun got up, I’d switch to white. A lot of shad were in the areas, but I felt like that darker bait in the morning was something they could find a little better.”

> Both were 3/8-oz Jack Hammers with a Z-Man DieZel MinnowZ (black blue lam) in the morning and Z-Man Razor Shadz (b/b and pearl).

> “When those pre-spawn fish eat that Chatterbait, a lot of times they’ll swim away with it as fast as they can — when pre-spawn fish hit a Chatterbait, they truck with it. It’s hard to keep up with them and it’s virtually impossible to get a good hookset. I had a 6.4 gear ratio reel the first day and literally could not keep up with them [his back-seater had a better day 1 than he did]. With a faster reel, I got a better hookset….”

Why a Chatterbait in a cold front?

Most people would think that’s too fast a bait, or that any moving bait is no good:

> “A lot of people were dragging baits, like how the guy won it the last time. If you went to any one of the sporting goods stores around there, they were sold out of junebug lizards — so I felt like the fish would see a lot of those.

> “There’s something about that Chatterbait that gets that reaction bite. Every time I’d catch one, it would have the bait back in its crushers. It blew my mind I couldn’t get more bites — you’d think eating a bait like that, all you had to do was get it around one.”

> “I had 2 different ones. Throwing on the outside edge, I’d wind the bait, stop it and pull it with my rod. If I threw on top of the flat itself, to get around some of those holes in the grass, I’d burn it and kill it — I wouldn’t use my rod to pull it. I’d vary the retrieve with the reel.”

> “One thing I’ve noticed with experimenting all winter long and earlier this year, for some reason it goes up and over wood so much better than any other [Chatterbait]. I knew that some stumps and [other structure] were mixed in on the eelgrass flats. If I can throw it around a piece of wood and not get hung up as bad — and it doesn’t roll over — I can fish it more efficiently.

> “My son Beau and his partner finished 5th in a high school tournament on Toledo Bend…around stumps. One had a different style on than [the Jack Hammer], and he got hung up 10 to 1.

> “It has a smaller head and a little different sound than the original Chatterbait.”

> Because of the cold front and the way he was fishing, he said the fish would only bite first thing in the morning and the last couple hours of the tournament day, which is when he got the most bites — but he only caught 5 each day.

> The cold front actually helped him because weights went down for everyone: “The water temp dropped 6 degrees, bright bluebird skies — it really slowed the fishing down. Everyone was pretty much whacking on ’em [day 1], but that [northern] front blew through and just shut ’em down. That’s what enabled me to make a few adjustments and get back on track.”

> That Magnum Crank Rod was just discontinued, but he calls it “the greatest 3/4-oz lipless crank or Chatterbait rod I’ve ever touched. I very seldom miss one or have them spit the bait out.” He’s talking to St. Croix about resurrecting it.

How Takahiro Omori won the Martin Elite
ALL the Hartwell Classic baits and patterns!
To Top
We use cookies to ensure that we give you the best experience on our website. If you continue to use this site we will assume that you are happy with it. Cookie settingsACCEPT
Privacy & Cookies Policy