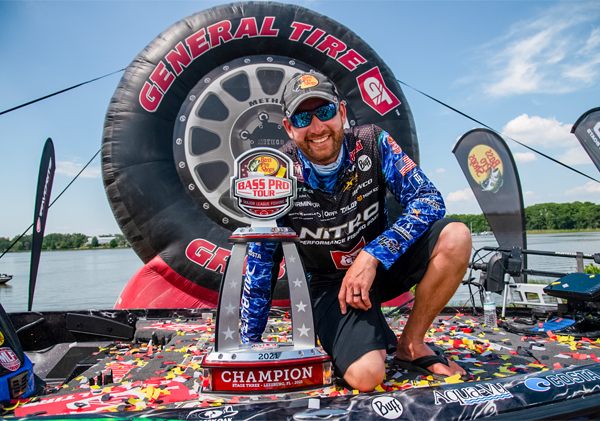 2 wins in 4 tourneys so Ott is fishing great – here’s what his Bass Pro Tour season has looked like so far:

Pretty dang good! He’s now 3rd in the BPT AOY standings, 1 point behind Brent Chapman in 2nd. Ott says he’s fishing confidently and aggressively – “I feel like I’m gonna get around ’em at some point….” Here’s what that looked like in this’n.

> “..I expected it to be an offshore deal to win, though I thought guys would do well fishing the bank – docks or Kissimmee grass or whatever. But I assumed it would be offshore hydrilla or brushpiles which have become popular in FL in the last few years.

> “I really didn’t have too much of a plan in mind. We were going out of Harris, so I knew I wanted to spend a little time there. But Griffin historically seems to always have more bites in it for guys willing to make that run. But you lose a little bit of that [risk] because we are given 30 free minutes of runtime in the morning so I had that in my mind too.

> “The Harris Chain has been fishing better and better it seems like every year – one of the few places it seems to be doing that. So I was excited [for] good weights. I was excited to be there a little earlier than we were for Heavy Hitters last year….

> “I had a good practice. This was the 1st event we were allowed to really talk amongst the competitors…we could talk a little fishing at this event. With what my practice was and couple guys I talked to, I expected a minimum of 15 and as high as 17 a day to make the cut.

> “I wanted to make sure there was no current anywhere…canals and rivers connecting the lakes, so I didn’t hang around in Harris too long before moving. I ran through Eustis, Dora…all the way to the dam at Apopka. I wanted to look at as much as I could.

> “I caught some fish here and there. Came back to Harris at the end of the day…had a few more scorable fish…. Caught some on the [Rapala OG] Slim, some on swim-jig, and I did see a shad spawn that morning.

> “The next practice day [daylight til 6 pm]…still places needed to check on Griffin and make sure there wasn’t a lot of current over there….

> “…couple bites…went into the marshes. In one of them I caught a 5-lber, then I caught a 4-lber, lost another, and then caught 2-3 scorables back to back. I probably caught a dozen scorable fish and saw that many more…. I thought, Man how can I not come in here and fish. I ended up spending the whole day there.

> “I kind of hated to be in that marsh…long run, no-wake zones, then electric-only in those [marshes]…basically means I have to fish in there the entire day.”

> “The next day I stayed in Harris…keep a bait in the water, going to get to fish the whole day. We had 30 minutes…can go look for a place to start so that’s what I did. I rode some areas I fished and looked at those…just went cruising the shoreline looking for birds…shad spawn or some type of baitfish spawn going on. If they were shad, they were really really small.

> “One particular dock had several birds hanging around it…as good a place as any to start, so I put the Talons down. …3 minutes til lines in [and] fish started popping around this Kissimmee grass and around the dock….

> “That dock I started on I ended up catching somewhere in the neighborhood of 30-40 lbs – on that single dock [the outside of it was 4.5′].

> “Most times at sunrise the shad spawn is starting to dwindle, and 30 minutes after it’s all but done. But when the water is off-colored, the shad spawn doesn’t really get going good [til later in the morning]. So [in Harris]…by sunrise it was really just getting going and about an hour later it was really going good.

> “They were just absolutely blowing up feeding…insane how much life and action was around there…5 dock poles, caught multiple fish off every pole.

> “I turned around to go back to the dock, and somewhere inbetween I started catching them again. I had 40-42 lbs the 1st period.”

He was close to Bobby Lane (2nd) who was leading that day and for a time tried to overtake Bobby to get a pass into the championship round, but at some point decided it couldn’t be done and took his foot off the gas.

> “I went straight back to that boat dock and it was a lot different…. [Several guys who made the cut]…200 lbs of bass caught off a 4-mile stretch of bank the day before. …fished down that bank, little pods of them….

> “…by the time I got most of the way through the 2nd period I was pretty comfortable above the 8th-place cutline. …little ways into the 3rd period…kind of expanded on it…. Same exact way, same shoreline, I just added some other stretches….”

> “Andy [4th], Brent [3rd] and I were all fishing that stretch. Knowing how much we beat on it, I thought I wasn’t going to win solely on that stretch of bank. Right out of the gate I went for a cruise to see if I could find somewhere else to start, and found a place on the north side of the lake with a lot of birds and a lot of bait, and some wind.

> “I caught [a few scorable fish] there…handful more fish, not scorable, not the quality I’d been catching…in the lead but in the next 30 minutes I didn’t catch any and everyone else was catching them.

> “I thought, I have to get back over there where they live. I had more confidence [about it] and it had better quality fish too…3 and 4 lbs vs 2 lbs. I knew [Andy] was catching ’em [on that stretch] gave me some confidence….

> “…slow but steady [catching them] til the last hour or 45 minutes. Imagine looking at a bank…2 miles 1 way, 2 miles the other. I’m at the midpoint. I’d been fishing midpoint left…had fished hardly anything midpoint right.”

He started catching ’em again, on a grassline, around some rocks, and started seeing a lot of birds and bait. He loaded up in a 50-yard stretch and said:

> “I noticed a contour change on Lakemaster…some really pretty points where I wanted to crank my Slim.”

He did that, it worked and that was all she wrote:

> “The 3rd period I could take the Slim or the swim-jig and go to the outside of the docks, the deeper end [3-5′]…could catch fish on those deeper docks. The shallow stuff would still happen here and there, but the little-bit deeper edges of the docks were for sure better.” 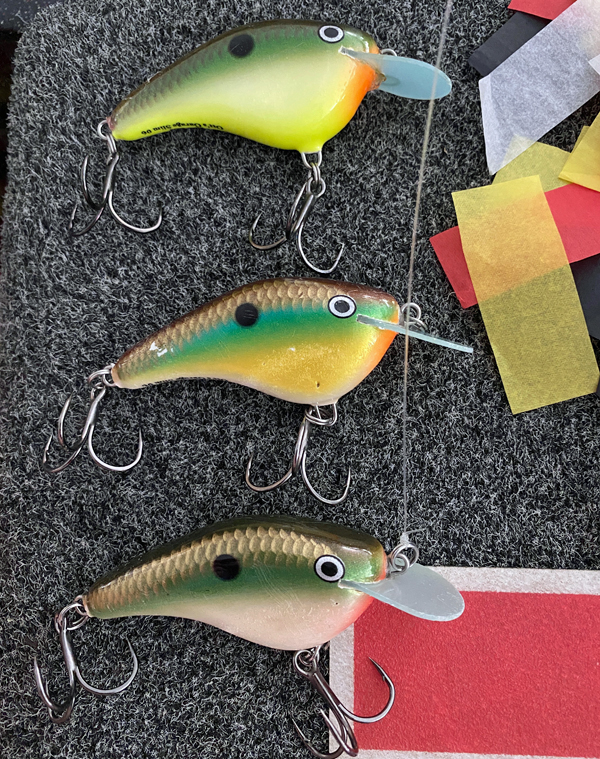 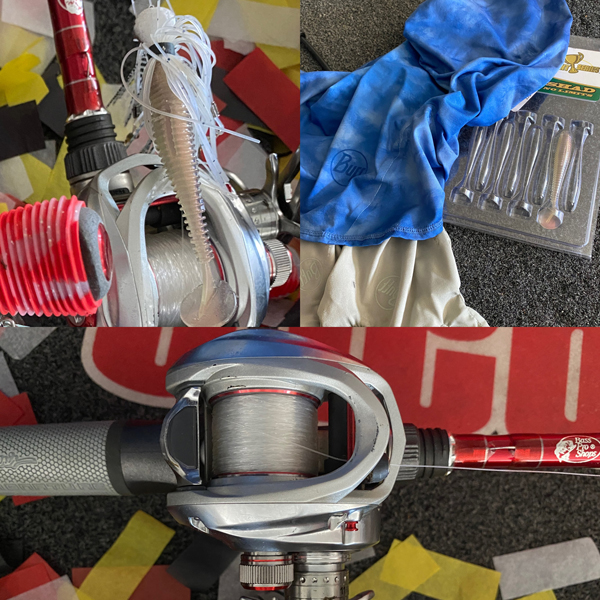 How he fished the docks:

> “…under the dock as [far] as I possibly could. The Slim is a flat-side but you still can’t skip it very well, but that was the best thing to get them to rect to it. Some were too low so I had to throw the swim-jig under it….”

> Electronics: “The biggest thing was my Talons because the biggest key to catching those fish lot of times was making repetitive casts…I think because the fish were moving through those areas…at a good spot, sit there and keep throwing.”

> “I give God all the credit for sure. My knowledge and my direction took me to Griffin on day 1. I still don’t have a good understanding of why those fish didn’t bite. The conditions were basically identical to what they were in practice but the fish just didn’t bite. Because of that I didn’t go back and I won. If I did what I wanted to have happen…probably not make championship much less win. But He had a better plan. Sometimes He closes a window to open a door and that’s what this week was.”

> MLF format: “I truly love what we do. In a traditional event, with a bad 1st day like I had, your event is over with. You won’t win the tournament. That can still happen in these [BPT events] but it’s neat…to [be able to] come back and make the cut, and end up winning the tournament.”

> The Rapala OG Slim will have 2 more new colors: Coosa special and Classic craw, which will look like the Sharpied-up Storm Arashi Vibe Ott used to win the ’19 Classic…and “Classic craw” is an Arashi Vibe color.