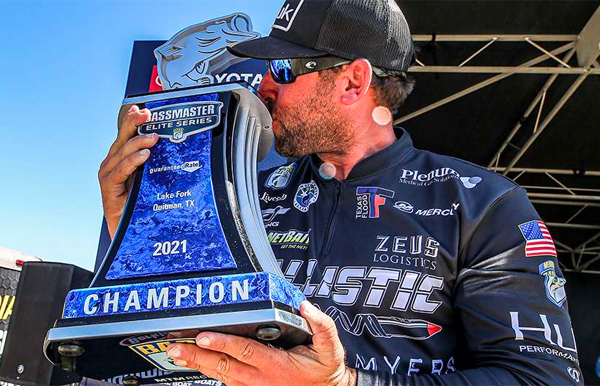 “It was a good day at the lake,” Lee said. Sounds more like 2 okay days, then a good day, then a day of sheer big bass ketchin’ insanity! Stick a Fork fork in the other guys cuz Lee was on ’em! Did I mention Lee’s a Fork guide? Sounds like an advantage BUT it rarely is at the top even tho it was this time. Here’s what went down.

> “Practice really wasn’t that good. …with the full moon coming, I knew the fish were going to change…knew it would get right eventually.

> “…the gizzard spawn – gizzards pull up on that full moon and spawn on those shell beds…. There’s a difference between the threadfin spawn and gizzard spawn on the lake. Gizzards spawn in the main lake in the more-shelled areas. Those big gizzards like big open-water points and shelled hard bottom and wind. Threadfins are more in the pockets – on the bank, grass, docks, rocks….

> “[In practice] the main lake stuff wasn’t that great. …little threadfin spawn further up north…knew I could get up there and survive off it. Whether it was 2nd or 50th I didn’t know.”

> “The first 2 days I started up the lake a little bit…right inside of a major creek – one of the major creeks they spawn in, real clear water. About 20 guys were in there bed-fishing, but there’s a little secondary point on the mouth of it…overlooked because it’s so little. A bunch of fish were schooling on it – a lot of 1-lbers, but every now and then you’d get a big one. …14 1-lbers and then a 5-something.

> “I caught 2 big ones on a jerkbait, [some on] a topwater but none I weighed, 1 on a Carolina rig…. I left there and went to a main-lake bar, a little deeper, and caught a 6.5 and a 5 on a big magnum squarebill.

> “The 2nd day [he went to the same place and] caught 4 on a jerkbait, then went around and caught a couple big ones on a topwater….”

He made the 1st cut and:

> “We had weather coming in – clouds, rain, NW wind… I know where to adjust and how to catch them with the wind…bed-fishing [peeps] don’t know where to go….”

> “I was comfortable. I was like, Let’s go swinging. I went to where you saw me on the final day, that island on that bar.

> “I caught some good ones on top on the Spook and saw some whales. I left…after lunch I made a pass and boom, boom [couple bigs].”

He then fished some points “but didn’t catch anything,” then hit another point and landed a big one, then caught another big one on the next point:

> “Then I go back to where I started on the island and caught 6-7 on a Rising Son [swimbait] and culled the last one out for the day.”

> “[So] I positioned as far to the right off the point [island] as I could, fired the Spook and caught a 9-02. Then I caught a 4, a 7-something…then an 8-15 on the Rising Son swimbait. …fished there for a while longer and caught more but nothing helped.

> Saltwater Spook: “The deal was the rod – I didn’t lose a fish all week. I’ve been waiting on this rod, a 7′ MH Halo HFX Cranking Series…good parabolic bend, was hooking those fish…40-lb braid, throwing it a mile and hooking them way out there. They were surging, jumping – the rod bent enough that [the hooks] wouldn’t pull out….”

He replaced the stock hooks with 1/0 Gamakatsu trebles (he calls ’em “meat hooks”) and used a high-speed reel.

> “…slow, steady retrieve. Throw it as far as you can, then slowly crank it. Just keep reeling because sometimes they bump it. Reel, reel, and when it starts loading up, jack ’em. They don’t come off….

> “I’ve been doing [the big swimbait thing] before it was cool. …10-15 yrs ago…we started doing it at night at first, then transferred it to the daytime.” 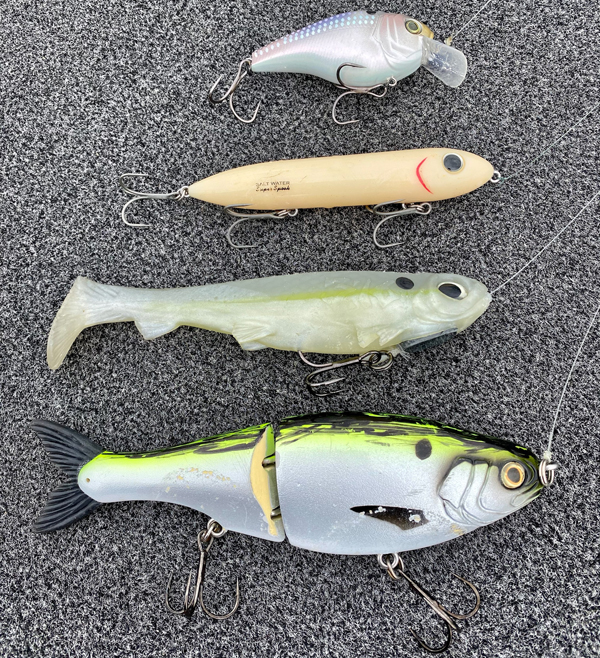 > “I had [his electronics] off the whole time. I didn’t even have my trolling motor in the water most of the time. The fish get so much pressure, they’re so smart and mature – if they hear a trolling motor that shallow, they’ll swim off 40 yards and wait on you to leave.

> “…Minn-Kota Raptors…had them down the whole time. Every big one I caught the last 2 days they held me in the same spot…being quiet and making long casts.

> “I’ve won 2 Elites with my trolling motor up and my Raptors down, being patient [and quiet].

> “Lakemaster mapping…showed little points, little secondary bars, high spots – it’s the deal. It shows detail like crazy. I knew most of [the lake] already, but where I caught the 2 big ones on the squarebill I’d never fished there in my life. The Lakemaster map showed a little bitty jut-out on a spot I’d never fished before….”

> He fished the threadfin spawn the first 2 days, and the gizzard spawn the last 2 days.