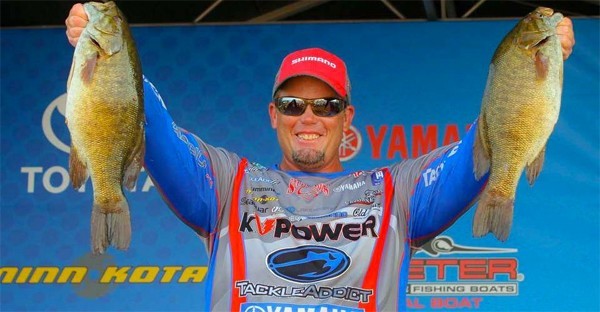 Every smallmouth bass tournament is supposed to be a dropshot-fest. And I guess the Mille Lacs Bassmaster Angler of the Year tournament did do that, but Keith Combs won it dragging a jig. Seriously. Details:

> “Once in a while things from practice don’t change.

> “[Most of the time in the ’16 AOY tourney] I tried to fish shallow or dropshot, and I wasn’t catching the right size. So this year I decided to see if they’d still bite that jig. I caught a couple fish out in 20′ and thought, ‘Well that’ll still be a player.’ Every one that bit it was a 4.5- to 5-lber.

> “I found a couple other really good schools of fish and never really put the jig down because the size was there.”

> “…a long reef that ran way out into the lake…several miles long. It had several high spots — I was on one of the last ones that had 20-22′ water on it.

> “I thought that the whole area would be good…but it was a very small, little spot. I’d catch them on that waypoint, and when I’d try to move off it I wouldn’t catch anything. I don’t really know why — it wasn’t the highest spot and didn’t have the thickest rocks….

> “That spot definitely carried me — it let me lay off some other stuff the first day. The first day I caught 23-24 lbs on my first 5 casts, then totally laid off on everything else.” 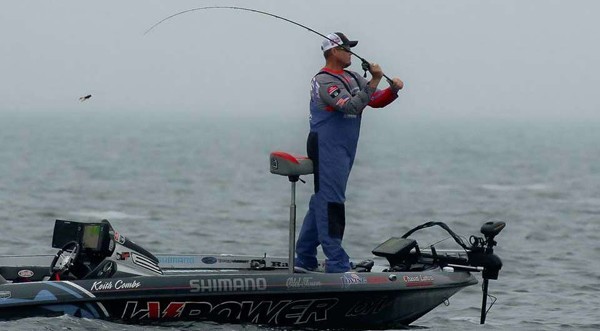 How he fished it

> “The fish were eating a lot of crawfish. Every day I had to clean out my livewell because it was clogged up with pinchers and stuff.

> “I didn’t lose many jigs, 2-3 a day, mostly because of zebra mussels. The jig didn’t get hung up too bad — I think with that 1-oz, the size of that head doesn’t get caught in crevices as much.

> “You wanted to keep that jig on the bottom. A long cast was key. It seemed like I was reeling forever…. A fish might hit it way out or midway through the cast….”

> 1-oz Strike King Tour Grade Football Jig (gp) with a Rage Craw (bama craw). “In practice I was using just straight green pumpkin, but I noticed that every fish was spitting up crawfish as I was reeling them in. They had a lot of orange on them so I changed to that bama craw. I didn’t experiment much at that point — I felt pretty dialed in.”

Interesting line choice — he could’ve used braid with a fluoro leader, or with zebra mussels a concern, Seaguar AbrazX. He said:

> “One of the things that was necessary was to make a very, very long cast. InvizX is the same type of line I’d crank with…castability. AbrazX is a little-stiffer line…it’s good but I’d rather use InvizX.

> “I could have used braid with fluoro, but I don’t use braid unless I have to. Only time…frogging, throwing a topwater, or flipping big mats or real thick wood. Especially with a heavy setup I feel like I land more fish with fluoro. Just personal preference.

> “At the end of those really long casts, if one ate it way out there I didn’t really feel a bite. Just a heavy, mushy feeling. I’d increase my reeling speed and just pull.

> “Almost every smallmouth had the whole jig in their mouth…the fish had it for a while before I set the hook. It was almost a little embarrassing, but they weren’t going to let it go so it didn’t hurt to delay my reaction. With braid I’d have probably wanted to jerk a lot sooner.

> “Sensitivity is good because it keeps you on your toes, but at the same time you have to be 100% concentrated on making sure you don’t set the hook too soon.”

> “I’d see fish on the graph and drop on them with a dropshot but never caught a fish in the tournament on a dropshot. The fish weren’t reacting to it. I think they’ve just seen it a lot.

> “In practice I cranked a 6XD to find a couple little schools. I think I could’ve caught ’em cranking, but it’s so much better to catch them on a single hook.”

Bobby Lane’s MLF Championship winning baits
How Brandon Palaniuk caught ’em at Mille Lacs
To Top
We use cookies to ensure that we give you the best experience on our website. If you continue to use this site we will assume that you are happy with it. Cookie settingsACCEPT
Privacy & Cookies Policy