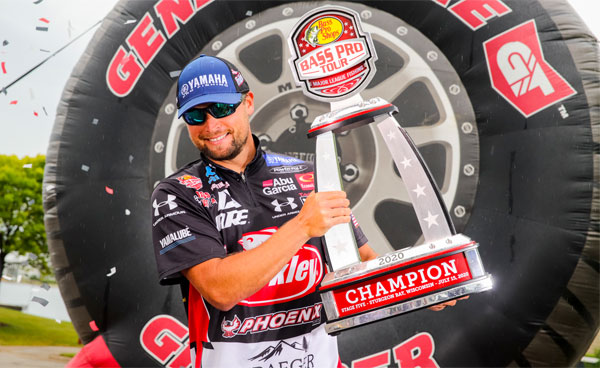 He loaded his boat 3 times in a row so he won it, but not real easily because Mark Daniels Jr made it kinda close on the last day aka the “championship round.” Here’s how Justin did it:

> “I was excited it was changed from Champlain to [Sturgeon Bay, WI] because I knew it would be dominated by smallmouth and that played to my advantage. …2017 at the St Lawrence it really started clicking for me how to follow them, how to catch them and what to look for.

> “Going in, I was thinking I’d go up there and get a top 20 or 30 and have a chance to make Redcrest [championship], and catch 1 big fish to make Heavy Hitters.

> “In practice the first couple places I went were really terrible. But the 3rd place I launched — Sturgeon Bay — it was unbelievable how good it was, and hardly anyone was in there fishing.

> “I knew it was the biggest spawning area in the whole entire region — that’s 1 reason I decided to go there — and no pressure really in there also made me feel really good.”

> “[After his practice] that was the first time I’ve ever told my wife during practice that I could win the tournament if things stayed the same.

> “The conditions in practice were sunny and a little breezy, not much wind. Another reason I fished Sturgeon Bay was it would be less affected by all wind directions. Northwest was the worst…only wind direction that screws that place up.

> “That place is so big, the wind changes the current, it moves water temperatures around, it moves the fish around and bait around. The fish on the main lake are affected by that, but [Sturgeon Bay] was more consistent…. I knew that would play in my favor over the course of several days.

> “Other than [he fished] a flat with isolated clumps of grass in 12-16′. [The bay as a whole] really reminded me of fishing St Clair, not a lot of contour change. Smallmouth don’t need a ton of contour change. They’ll live on a big flat if there’s plenty of grass and they’re all relating to that.”

> “…cloudy…the first morning…. Normally smallmouths don’t like rain and clouds, but I got bit on the first cast and it was just insanity after that. That made me even more confident….

> “…with 5 minutes to go til lines in, from where I was going to start I could see that rocky point and no one was there. So I idled over real quick and saw some fish. If you see smallmouth on a spot when you idle over, there’s a bunch there.

> “I ended up just staying there [all day]. I left at the very end for 5 minutes — I caught a 3-lber off a clump real quick just to see if they’d bite.

> “I was just dropshotting. A little break on the end was really the key spot. Some other guys who fished semi-close didn’t catch them as good because they weren’t exactly on the juice. …little tiny turn in it — made a kind of subtle point that wasn’t on the map.”

Pause it — he caught 141 POUNDS OFF 1 SPOT that he fished ALL DAY. If you know smallie fishing, that doesn’t happen. Because when you release ’em, they swim back down and somehow shut down the school. Asked Justin about it and he said:

> “I think there were so many it didn’t even matter. I couldn’t believe it. I expected it to change — letting them go back down there, shutting the school down. But I think there were literally hundreds of fish around me on that spot.”

Here he is in the boat: 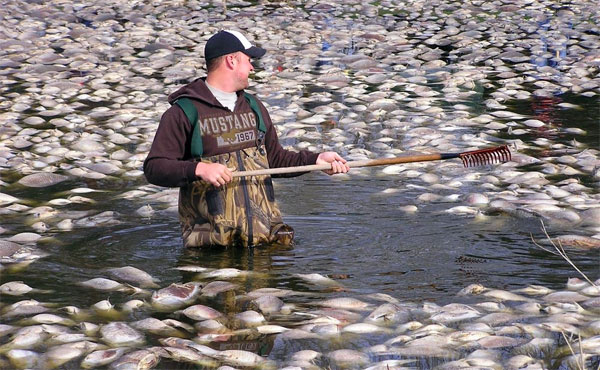 HAHAHA! Okay back to reality…I think?

> “The 2nd day I started back out there on the same spot. I was really curious if they’d bite again or not. It wasn’t as good as the 1st day, but I caught enough off that spot to feel comfortable by the end of the 2nd period that I could leave and I knew I’d qualify to go [straight] to the championship round.

> “I spent most of the 3rd period on the main lake, running around…hit about 15 spots and never had a bite…. That really gave me confidence that on championship day I’d stay in Sturgeon Bay.”

Then he had to wait 2 days before fishing for all the Benjamins — which is different and tough so I asked him about it:

> “Very anxious. My wife flew up and I tried to enjoy as much time with her as I could, but I was super anxious. I knew that since I told her in practice [about maybe winning] that I was much closer to it.

> “I was hoping no one else had found the fish on the flat, and also that they hadn’t moved. Because after 2 days, you never know with smallmouth — they can be long gone.”

> “I felt really good championship morning driving down there. Other people were trailering up to different areas, so I knew I’d have [the bay] all to myself….

> “I started on the same spot again…caught 5-6 fish for 14-15 lbs. I could tell bites were down, the amount of fish I was seeing was down, so I figured it’d been hit hard in the knockout round. But that was okay — it wasn’t sucking me in and trying to get me to stay. That made it easy for me to leave and run the stuff I wanted to.

> “I was looking for grass that was more isolated…didn’t want to be around huge, giant clumps of grass because there’d be too many places they could be and they’d be harder to target.

> “I already had all my waypoints marked that I wanted to fish, so I really just ran as many waypoints as I could. If they were there and on, you’d catch them right away. If it wasn’t on, you needed to move.”

He caught every fish on a dropshot rig. He had a bunch of the same ones tied up:

> Berkely Maxscent Flat Worm (gp, smoke black/purple flake, black). “I don’t think it mattered, but for my own confidence I used black when it was cloudy and the other colors when it was sunny.”

> He made 1 cast with a different bait: a Berkley Powerbait Lugworm on a Ned-type head.

> He wanted to shout-out his Yamaha and Phoenix 921 ProXP: “I truly love my boat, and fishing on big water doesn’t bother me at all. Every camera guy and boat official talks about how much they love my boat, especially on big water.”

> Like Jacob Wheeler, Justin is running a mix of electronics — intentionally — and doesn’t have an electronics sponsor.