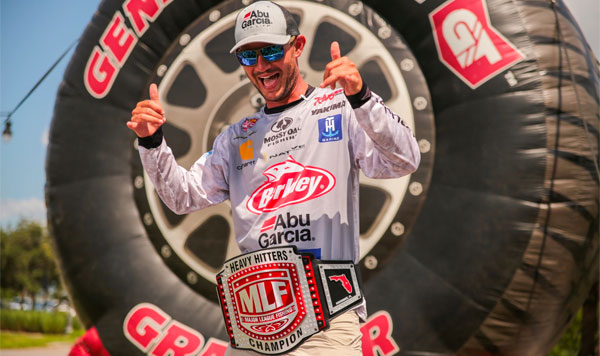 > “In the 2 days of practice we got a tropical storm come through…off and on rain, clouds and wind.

> “I spent my first day basically fishing Toho. I started off in the hydrilla — offshore grass. …lot of boats,I caught a few fish but nothing crazy. I was just searching….

> “…started going through all the different lakes — fished a little bit in Cypress, a little bit in Kissimmee…wasn’t that great. I…wasn’t feeling Kissimmee…came back to Toho, pulled up to a little grass place, caught a couple 2.5s…caught a 9-02 there….

> “The next day of practice I spent my time on Toho. I tried to find something a lot of boats weren’t on, something different…eventually found a brushpile mid-morning. I caught a 2-lber that got hung up, then when I got it out…one about 6 or 7 was trying to get the bait from out of its mouth.

> “[Then] another one had it and I shook it off…kept looking, didn’t fish much. I didn’t want the other boats to see [what he was doing] so I just really marked a lot of brush. I spent 5-6 hours just graphing.

> “That was the key for the week — finding that brush. I didn’t know it was out there. I’ve heard that people sink it out there, but I had no clue where.

> “Basically it was the middle of nowhere — no grass around, just a flat away from the grass…isolated brushpiles people put out out there.

> “I had my Lowrance set at like 100′ on side imaging, and I would scan back and forth and zigzag out there. I could see those brushpiles and I’d just hit a waypoint.

> “One area about the size of a football field had 4-5 brushpiles…a couple were isolated with nothing else around, just kind of by themselves.”

> “I started on the place where I got several bites, and instantly started catching fish. The first day we had a lot of wind and clouds, so it wasn’t lights out. I think I caught 4-5 in the first hour, some good quality…not leading or anything, but was top 5.

> “…caught a 6-15 the first day, so some better quality…. I kind of knew what the weights were looking like and could tell no one in my group was fishing out there. That gave me confidence I was doing the right thing.

> “I went through a lot of different baits that first day trying to figure it out. I started off throwing a big worm and was catching good ones on that, a big squarebill, a Carolina rig…changing a lot…figured out the lineups and where I needed to sit.

> “Every day was just a little bit different, but it was consistent. Even with that wind and the clouds…sun and wind was when I caught my biggest ones. It seemed like they were a little scattered when the clouds were out — the sun brought those fish close to that brush.” 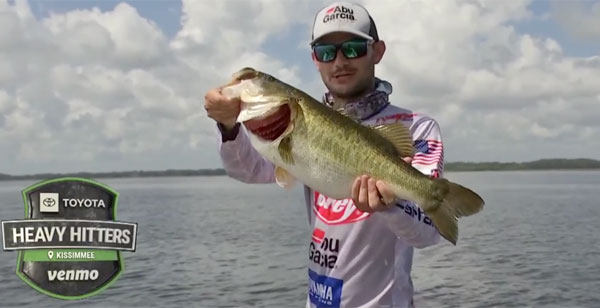 > “I was mixing up my baits every 10 minutes it seemed like.”

> 2.5 squarebill (chart shad-ish, looks like “summer sexy shad”) — “I wanted a big bait that didn’t run real deep…a big squarebill that wouldn’t get hung in the brush and something that wouldn’t run very deep. Color didn’t seem to matter.

> “A big squarebill really doesn’t come up that often in a tournament. Most times guys are throwing a 1.5-style bait. But I felt the bigger profile would get a bigger bite.

> “I was burning the bait — really reeling it. Seemed like the faster you reeled it, the more bites you’d get.

> “You just had to get it around the brush [not in it]. It seemed like if you went right over top of it you could get bit, but the fish were just sitting around [to the sides of the brush] too.

> “I liked cranking ’em because I could hit that brush…. The worm you had to fish so slow, and it might be off [from the brush]. The crankbait you could keep casting over and over, and find out exactly where they were at — and get a reaction bite too.

> 10″ Berkley Power Worm (plum) and a 8″ Berkley Maxscent Kingtail Worm (plum or junebug). “The Kingtail I actually didn’t have any of so I went to Bass Pro. I was mixing it in. It seemed like I could get more bites sometimes with the Maxscent when they wouldn’t bite anything else.”

> “I starting mixing in a swimbait on a belly hook — it was catching some bigger fish — showing them something different…. After days of fishing [the same stuff over and over] I was just getting bored really, or I was throwing something to try to catch a bigger fish or more fish.”

One mo’: The hair jig

> “The last day I picked it up and caught the big fish on it, the 7-04. I’d been fishing that place for over an hour — I pounded it, throwing all these different baits…picked up that hair jig and the first cast I caught that 7-04.

> “A friend of mine named David Allen made 6-7 of them for me just to have for the TN River. They’re 5/8-oz, made in his garage. I was just throwing something different at ’em.”

> “With a hair jig, TN River fishing, seems like I’ve gotten more bites on lighter line…the way it falls. Most times they hit that bait on the fall, and that lighter line seems to trigger more bites.

> “Sometimes fish would be 15-20′ from the brush…just hanging around it. They wouldn’t always be dead in the heart of it, just kind of around it.”

Is your goal to win one of every tournament and format there is?

> “I don’t know if I’ve won ’em all. I won there last year at Kissimmee, so I guess there’s something special down there in those waters. I don’t know.