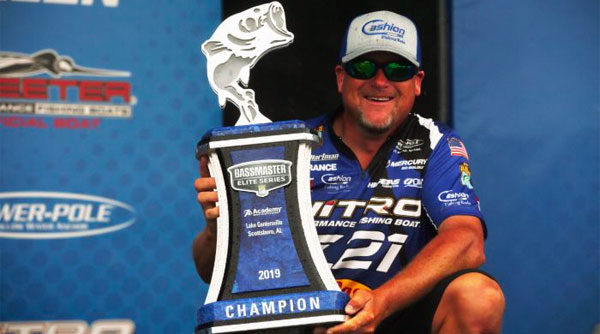 Jamie Hartman’s had a couple close ones on the Elites, notably a 2nd and 3rd in 2017, and he had a top 10 (8th) at Hartwell this year. So his time was coming. Here’s how he got his first blue trophy.

> “I practiced everything offshore. I never went to the [shallow] grass…I never did anything around the grass unless it was grass on the main river — ditch mouths, channel swings, that kinda stuff. All stuff those fish should’ve been on the 3rd weekend of June.

> “Day 1 everything felt apart. The lake was a zoo between the locals, other tournaments and competitors. I got in a bad rotation. Everything I wanted to stop on had a boat or 2 on it. I burned so much gas that first day. I know I wasted a lot of time.

> “The 1 school…was going to save it…they were gone. The weather [had changed]…it slicked off, it was really hot — I guess that school was wind-dependent. The deep bite sucked.

> His main rig for that spot was a light Carolina rig with a Fluke-style bait, 7′ 6″ MH Cashion flipping stick and 20-lb Hi-Seas fluoro. He also threw a Pop-R, a football jig and a Spook-style bait there. 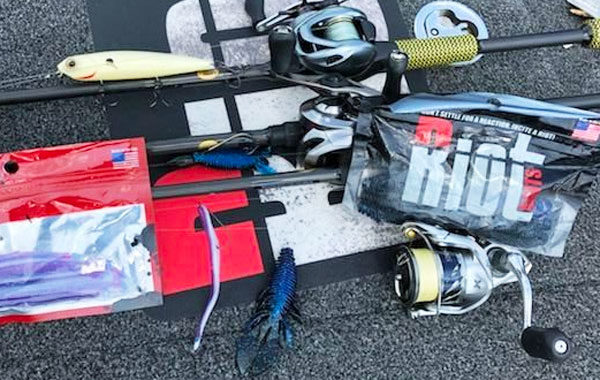 Day 2 he started punching mats, which is where/when he caught that 5+:

> “…still ran some of the deep stuff, looking for 1 good bite. With 45 minutes left, I scrapped it all and went to the grass…started punching mats. I picked a stretch that wasn’t getting pressured and started getting bites.

> “I was scouting stuff I’d never fished. I didn’t even have my flipping sticks with me — I’d never intended to use them. Everything I rigged up was for offshore. I usually use a 7′ 11″ to punch mats but I used my 7′ 6” Carolina-rig rods as my flipping sticks…they worked.

> “I was punching main-river grass where it topped out. It wasn’t really matted — wasn’t super-thick. I was staying more toward the edge of it. All my bites were within the first 3′ of river edge. I was sitting in 9-10′ and it probably 4-5′ [where he was fishing].”

He did catch fish deep, notably on day 4:

> “It was a long ridge that ran out…22′, made a turn…creek channel against it. The fish must pull up on that point as soon as the wind blows.

> “The last hour [of day 4], I idled over it on my way back to see if they were there. I came off plane and let the [graph] load. My camera man looks at me and says, ‘Holy crap even I can see those!’ I picked up the football jig and started stroking it — I picked up everything I could throw…. Caught a 4 [on the football jig] with like half an hour to go that was essentially my winning fish.

> “It was easy to get bit with a dropshot, but they’d also bite stroking a football jig.”

> “…2′ on the stroke. I wasn’t really cracking it, it was more of a high hop. If I cracked it, they wouldn’t respond to it that well. But if I made a pretty sharp hop…they’d hit it right then or as soon as it hit the bottom.”

> “I got the Lowrance Alabama C-Map just before the event, and it was a night and day difference from the chip I had in there. It opened up that whole lake. Everything and anything you want to find is on that map now.” He uses HDS Live 16s and 12s.

Would you fish a turtle over a craw, How to find bigger bass, Geecrack Spiron and mini frog
New era for electronics, Jamie Hartman winning baits, Big bass nightmares
To Top
We use cookies to ensure that we give you the best experience on our website. If you continue to use this site we will assume that you are happy with it. Cookie settingsACCEPT
Privacy & Cookies Policy