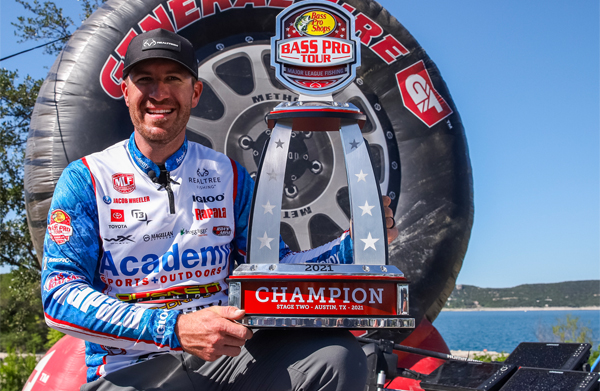 Jacob had fished Travis before, and in fact finished 2nd in the B.A.S.S. Fest there in ’18. So he thought he had something to go on – but then chucked it. Here’s the down low:

> “….I sorta had a pretty good idea how the lake set up. In that [2018] tournament it was late May and I was catching them offshore and up shallow on topwater. But…going into this tournament I figured it’d been a late year for a lot of the South…so my gut was telling me it’d probably be a spawn and post-spawn fry-guarder deal [even tho] the date was telling me to maybe fish offshore….

> “The 1st day I dedicated to practicing offshore and never found a big group of fish. I just pretty much wrote it off at that point….

> “The 2nd day of practice I saw several spawning and paired up, so it got to the point where I was like, Yeah, they’re just way far behind….

> “I think a lot of the fish were starting to get in the pockets and spawning areas…it was obvious a group of fish had already spawned….”

> “I felt the fish were coming out of pockets and because the lake was so low they didn’t have that much to get on: rock, some bushes that grew up when the water was low, and boat docks.

> “I think they just live on boat docks, and they’re really good there regardless. When you pull up to the docks, they have bluegill, shad swimming around, crappie that live on them – they have it all. That’s a big reason why those places are so good. With that buffet of food sitting right there…no reason for [bass] to leave.

> “Early mornings…little bit of a shad spawn…. Early mornings were my best deal. I always came out of the gate swinging pretty good…3rd period always my worst.

> “2nd day I had the option to reload on the water I caught them on, but I decided to fish new water and expand or eliminate some water I’d been fishing.

> “The last day I started strong, caught a few fish, and had a little lead at the end of the 1st period. Not a whole lot…the wind prolonged that [dock] bite a little longer [than pervious days]….”

> “I caught some fish on top, I caught a few on a crankbait, but 90% of them came on a white vibrating jig [in dirtier water] or a translucent [skirt] vibrating jig [when the water was clearer], and a white jig…pitching places where I couldn’t get the vibrating jig.

> “The docks were over 15-25′ of water but the fish were so high in the water column…you’d skip it in there and hear their tail slap the water when they went after it.

> “I’ve been throwing vibrating jigs on docks since I was 17 yrs old, winning tournaments with my dad. Certain times of year it works better than others, but it’s just something I’m comfortable with. The key is being super-efficient. You’re going to hit the sides of docks, you will backlash – that’s just part of it. Just cover enough high-percentage docks as efficiently as possible.

> “Most of the time they bit on the 1st cast. A couple times I’d have to make a cast into a 6″ opening in a dock 3x in a row to get the fish to bite. Sometimes they’d hear [the bait skip] from a long ways away and come over to investigate.”

Electronics weren’t much of a factor:

> “It was really nuts and bolts bass fishing – covering water….” 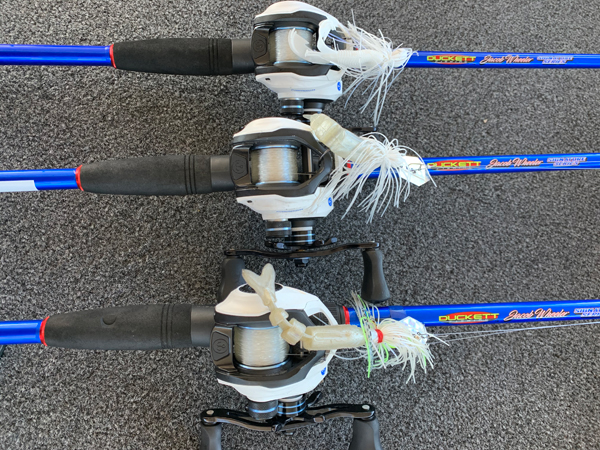 > “I’ve gotta shout-out my wife. She’s unbelievable. She does so much for our family, she’s a great mother – I couldn’t do it without her.”