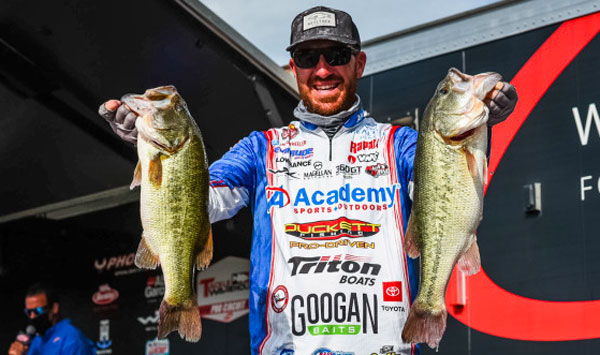 Hey Jacob Wheeler won a big tournament! But…didn’t that just happen? Uh, yep! But then it happened again. Here’s what went down this time, at Chickamauga last weekend.

> “…I sampled it all [depths, including] places I’ve caught ’em and places I’ve never made a cast on. I kept it all honest and started to dial it in in practice.

> “At the end of practice I had a decent number of grass places, decent schools offshore and some shallow. So I said I’m gonna rig up 35 rods…and go fishing. Anything I feel like on any given day given the conditions, that’s what I’m going to do.”

> “Day 1…15 rods on deck…topwaters, wacky worms, Cover Pops, deep-diving crankbaits…everything, had it all.

> “First day…found a lot of schools I didn’t find before. They set up on different places — 100 yards this way, half a mile that way, different spots — every year it really intrigues me [finding new school locations on that lake].

> “…rotate all my shallow stuff, all my deep stuff, figured out what was good and what wasn’t. I ended up catching quite a few of my fish offshore on the DT20….

> “So then every day I would check a new place. I couldn’t run it all — I’d just run here, run there, sort of just get a rotation. One place I caught ’em on, I’d caught only 1 bass on [in all the years] I’ve fished here.

> “…electronics will tell you…. Several times I stopped — I’d see 3-4 when I was idling and make a cast on a place I’d never made a cast on…because they were set up differently. Keeping an open mind offshore [about fish location] is just as important as keeping open mind shallow.”

His most effective technique was cranking — mostly with a Rapala DT20 (citrus shad), but he also caught some on a Rapala DT16 (big shad). Neither color is out yet but word is Rapala hopes to have ’em out this summer. Here they are: 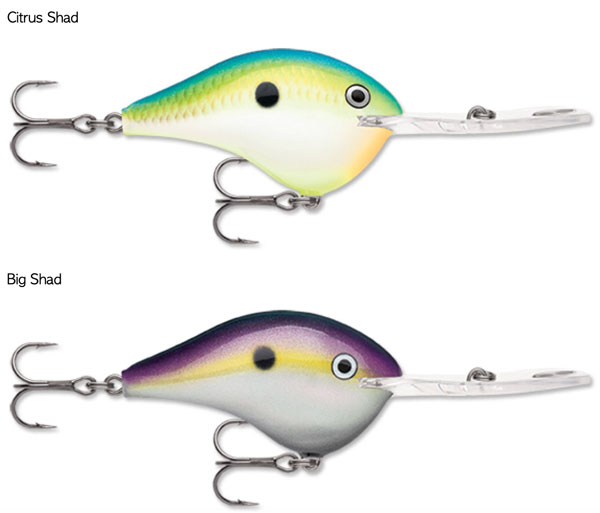 > “I normally crank with a 5:1 gear ratio out deep, but [in this tourney] I realized that the faster I cranked, the more bites I got.

> “The key with the crankbait — the big key…could generate a bite out of [schools] and fire them up and catch them so much more efficiently than with any other bait. Like with a jig, it’s hard to get the biggest ones to bite. But a crankbait comes through so fast…get the biggest ones in the schools to bite faster.

> “That was really the key. If I threw the worm in there, I would’ve caught 10 little ones before maybe I caught a big one, and I might have pulled the school to me…. [Crankbaits] could generate a lot of bites and the biggest bites, and that was the key for the whole week.

> “Each spot had a different [retrieve]…depending on the spot…. It all depended on the angle of the cast. …one of my best casts was sitting upriver and casting downriver. That defies the whole lifelike action with the current. Angles were key, and the angles changed every day.”

> “My wife kept everything together at the house. I was staying in my own bed, I’d wake up, grab a cup of coffee she had my lunch packed…cool week. My wife is awesome. That’s one of the biggest things for me, having that support system there. We had people coming in from IN, from everywhere. It was a really cool deal. Special.”