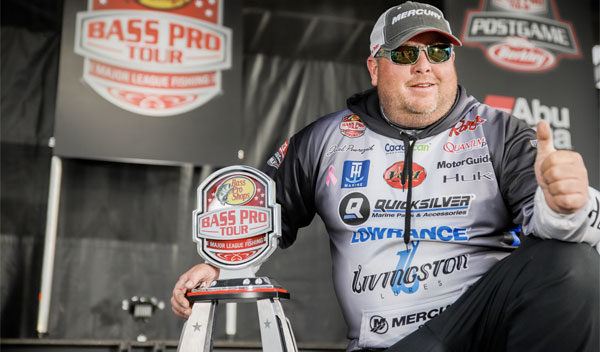 Jacob Powroznik adapted to 3 different lakes and a couple different conditions to win the 3rd-ever Bass Pro Tour in NC. Here’s how he did it:

> How you practice for a tournament over 7 days, 3 lakes and that much changing conditions: “I guess you just load that Ranger boat with everything you got, and hope you have it in the boat when that thought pops into your mind. You gotta be prepared for anything.

> “In this format you’re always practicing.

> “When we started, the water was up [on Jordan] so I knew it would be a kind-of Chatterbait, kind-of flippin’ bite going on. Then at Falls Lake, they sucked all the water out so I knew the fish would get suspended til later in the day and then move up. And I knew Shearon Harris — if I could make it that far — the way it was setting up, as warm as it’s been and it being a power plant lake, the fish would be where they needed to be [spawning].”

> “At Jordan I caught them on V&M J-Bug and a V&M Trickster worm, both gp…just flipping around hard cover, bushes and trees, places they would move up to spawn. They were spawning already…too muddy to see them. The water temperature was like 61 degrees.”

> “I used the weightless worm when it got real shallow back in those pockets.

> “At Falls I used the same bait [J-Bug], rod, reel and line…fishing around stumps off the bank. Same water clarity…stumps in about 2′ [the water was low so he was flipping wood off the bank, on a main-lake flat].”

He also used 2 crankbaits at Falls, which he said “were the key baits:”

> “…a handmade crankbait [shad] and a Livingston Shredder [white/black back]. That’s what I caught every one of them on on the 2nd day of the tournament to get me into 20th place. The 3rd day I caught them flipping….”

The whole time he fished a weightless stick worm on spinning gear:

> “…around bedding bass you couldn’t really see, off the edge of some saw grass in 2′.”

Asked him if he’s ever won a tourney with a spinning rod:

> “I never have. “I’ve been waiting my whole career to do that, to be able to throw a spinning rod all day [and win]. I like it.”

> “…Power-Poles…[was important to] Power-Pole down when caught one to not mess any of the area up.

> BPT strategy: “Absolutely…catch all you can every day.”

> “Anytime you beat any of those guys, you’ve accomplished something. They’re the absolute best. They’re lions, always trying to eat you. To be able to get away from them and actually win means a lot.”