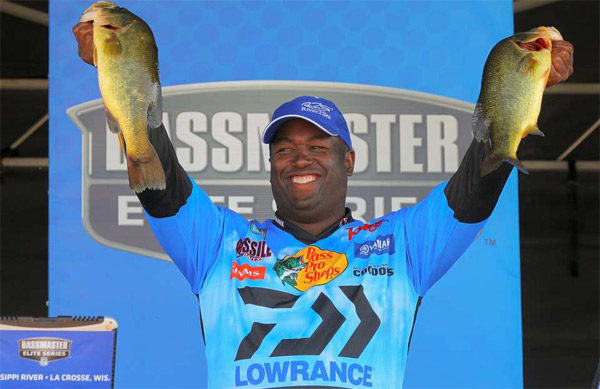 Well…Ish flipped a frog. Yep, FLIPPED a FROG. But that was after he ran aground and stumbled onto some fish so…here’s what went down.

> “The two spots I found kind of played out just right.

> “I spent the first 2 days of practice down on pool 9, 1 pool down. But I needed some fresh water. The last day of practice I decided find some water up top [in the launch pool] in case I’d lock back early.

> “In the morning I got 8 bites out of [the first place he stopped], and all were 3+ lbers. Solid big fish. Then in another spot I had 13-14 bites that were decent. The areas were a 5-minute run from each other.”

> “The first day I tried to run to that 2nd spot, but I missed the turn because of the rain. I knew I could get there running through this other chute, but I missed that turn too…then I completely beached on a sandbar. I went from 50+ mph to a complete stop.

> “My marshal [was a bigger guy]…I put him in the front of the boat and had to push my way out. [Ish got out, eventually pushed the boat loose and out, and]…I’m beat. I put the trolling motor down after I got to some depth of water, put the Power-Poles down and sat there to catch my breath.

> “When I stood up and looked, I was like: That [cover right there] looks like the stuff I’d been fishing. So I decided to just fish for a few minutes to figure out how to navigate to my starting spot. Turned out I was about 2 miles away.

> “I fished through it really quick, caught 1 that culled and missed 1 that would have helped. Then I fished even further past [his planned starting spot] and caught 1 that helped and a couple that I balance-beamed.

> “I was actually happy with it — I was in 20th place. I never made it to my big-fish spot, so on day 2 I wanted to start on my big-fish spot and see how it went. From there, I planned to fish where I fished [day 1] — I burned through that water so fast I knew I left a lot of fish.”

At his big-fish spot:

> “I fished my way around this deal and literally caught 50, but I was only able to cull up to 16 and some change. They were all the same size — I was putting them on a balance beam.

> “So now I move up a little bit, to 6th place. I go back in there on day 3 and fish my way around. I saw pond in there the day before but I couldn’t get in there. But that day I saw a ditch and drain to get in, plus with the water rising I thought I should be able to get in there.

> “I realized how many fish caught each day out of this spot…50+ on days 2 and 3…but there was still a ton in there.

> “Day 4 [he fished the big-fish spot again and the little pond]…I was catching a lot more little ones, but [still enough 3-lbers] to get to 16 lbs.”

He fished the down side of an island:

> “The up side of the island was a hard line — dirt, bank, trees — a hard line. Then pads in the middle, duckweed in some of the pads, and duckweed pushed into the bank. A light current was rolling through there, and it had a sand bottom with a little bit of hydrilla mixed in. The current was hitting the front line of the island, and I was on the back side of it.

> “In practice the hard line was 6” deep, and by the end of the tournament I had 1.5-2′ of water on the hard line. Other guys had 3′ [meaning the water rose more in their areas].

> “[In his spot] day 2 the water was still flowing downstream — it was sucking water downstream so it wasn’t backing up or rising a lot. Day 3 the same thing — the water came up a little bit. Day 4 finally it reversed and water came backwards into the spot. But there was clear water in there because of the hydrilla.

> “Wherever the duckweed was pushed in the most was best. Each day the duckweed changed because of the current. Duckweed was the key — grass, reeds, pads, but there had to be duckweed.”

> “I was flipping a frog. [Initially] I was getting bites on a frog, but I saw fish moving under the duckweed. I tried to flip them out of there [with a soft-plastic], but they wouldn’t eat it. Then I saw a small patch of duckweed, like a 2′ circle. I pitched the frog right to the middle and a 3-lber ate it right away. I didn’t even have to move it. So I repeated that.

> “I’ve done that [flipped a frog] before a little bit, but not to the extent I did at this event. Rojas did it at Dardanelle [last year] when he almost won it.

> “You can’t work the bait because there’s not enough area to work it, but the fish are looking up. So when when you try to flip through there with a weight, it goes to the bottom too fast and they won’t eat it.

> “They sucked it in under the duckweed. Duckweed is the best frog fishing mat you can ever fish — it’s the easiest stuff for them to access the bait. I had bites I didn’t even see. They’d just grab the bait. I didn’t even hear anything — the line was just pulling to the side. It was one of the best frog bites I’ve ever been on.

> “They were literally blowing holes through the mat. I’d pitch to the holes and catch those fish.

> “I went through about 10 frogs over the course of the tournament.”

> River2Sea Phat Mat Daddy Frog (black). “I caught a few on ‘yellow head,’ but the majority was on solid black.

> [The frog has] “a little wider body with a flatter bottom to it, so it pushes more and spits water when you slap it. Like when you keep your fingers together and slap the water — that’s how the water sprays. And when you push it through a mat, when you chug it, it pushes the mat because it weighs a lot more.

“The hooks are most important. I’m using an XH-action rod with braid, so I needed a beefier, bigger hook in this bait.”

> Why that heavy braid: “Braid is everything. I can bust 30 and 40 on the hookset, plus the diameter of 65 keeps the braid floating.

> “I never made it back to the day 1 fish. I went to my big-fish spot and stayed there because fish were filtering in there.”

> “Lowrance is working with C-Maps and their satellite imagery [with contour depths]. On my Carbon 16 I could see the pond [with that imagery] — it let me know it was there.”

How Greg Hackney won at the Sabine River
How Mark Daniels Jr won the Oahe Elite
To Top
We use cookies to ensure that we give you the best experience on our website. If you continue to use this site we will assume that you are happy with it. Cookie settingsACCEPT
Privacy & Cookies Policy