Did he really not pre-fish? Why did he think a jerkbait would play in a brush lake in TX in the boiling heat of summer? Those and other innerestin’ questions answered here – let’s take a look at how Hank won his 2nd conecutive Bassmaster Classic = amazing.

To set the stage, Ray Roberts is a lake with no houses around it, meaning no docks, and it has approximately 432 million flippable bushes. Okay a little exaggeration, but that’s what was happening with the water 4′ up and some fish not out deep, where you’d expect them to be this time of year. So to win this deal you had to find or do something different or a little better. Here’s how Hank did that.

> “Pre-practice…I didn’t spend any time there. I knew the hard winter and freeze they had was going to put everything behind. I tried to keep up on what was going on at Fork because the only thing I heard was Ray Roberts was always a few weeks behind Fork.

> “I just kept an open mind. I didn’t even have anything rigged when I showed up. I didn’t know what I was going to see and I didn’t have any preconceived notions. I did have my jerkbait rod rigged up because I knew there had to be some pre-spawn fish left. I just had to put the rest of the puzzle together.

> “I think I put it together really well considering 3 of the other top 5 were fishing in my 2nd, 3rd and 4th options…I didn’t realize it til I got running around. I think had everything gone right for Chris Jones, he was probably on the actual winning spot. But I couldn’t give up the willow-tree point to go there….

> “I had enough bites throughout practice that I knew I had a pretty good chance. I knew my starting spot was pretty special and I was boat #2 so I knew I could get there. And if I could catch them…if people were around then they wouldn’t come in and that’s pretty much what happened.”

> “…talking to Brock, I asked him about the lay of the lake…looking at Google Earth and looking at my Garmins I had to figured out where I had to run and didn’t have to run. I wasn’t going to go into the standing timber because I wanted to be able to crank up and go…that chopped off big sections of the lake for me.

> “Willow-tree points…if I could graph this…if you took 4′ of water away, it’s a point people could walk on…those had [current] flow back and forth on them and also had shad on them.

> “I wanted a wall of bushes. I didn’t want 1 isolated bush – that’s what everyone else was looking for. A wall of bushes with breaks in them…constant [current] flow coming through them.”

We all saw what played out, so I asked Hank if he had anything to add to it:

> “I’ve now talked to all the anglers and we all lost fish. I didn’t realize how much we all lost…. I lost a big one [his biggest fish] – I couldn’t turn him on a bush.

> “What got lost in the whole thing was exactly how bad and how hard a fishing day that last day was. By far it was the hottest fishing experience I’ve ever had in my entire life…hardest fishing day. I hate the heat more than I hate big waves up north….

> “…just keeping my head clear, remembering…you tell your son if you have opportunities, make the most of them…and my dad saying, ‘Always catch 5.'”

What he caught his weighed fish on:

Day 3: 1 on the jerkbait, 2 on a bladed jig, 2 flipping various plastics including a Berkley Pit Boss

> Jerkbait: New Berkley Stunna (stealth shad), “straight out of the pack, you don’t need to change the hooks. I was limited on the colors I had [because the bait’s not out yet] but since I’ve had ’em I’ve just had a lot of success with that color…always a good one to throw around shad spawns.

> “…Ray Roberts Dam…keep the boat in 8-12′ of water [pointing] towards the rocks and [make parallel casts] down it. I’d search the water column, just trying to catch roamers.

> “I could see them on my [Garmin Live] Panoptics, but by the time you’d throw at them they were gone. They were moving, chasing the shad balls. The shad spawn would happen on the dam, and as the day carried on the shad would pull off the bank and hold off the bank.

> “My intentions were to catch some big ones [there]. I caught some in pracitce but only got one of those bites in the tournament and it broke me off in a brushpile.

> “I’d take that bait and make the longest cast I could..just the standard 1-2-stop, 1-2-stop [cadence]. I was just looking for bites. I knew I was going to catch a small spot, a drum or had a chance at a big largemouth…only bites I had in practice were big bites, and that’s what triggered me to stay out there.

> “The 2nd day I catch one [there], he jumps straight at us, tail-walking, then starts digging down. [He thought it was a little one but] I get it to the boat, swing him in and it’s a 3.5-lber.

> “The key fish the last day out there was a 16” spot. It hit and missed the bait…I kept jerking it, without reeling, and he slashed at it again. It had 1 hook in the side. I pushed the button and let him go, brought him back [and kept on doing that]. I wasn’t going to chance him pulling sideways and coming off…ended up having to get the pliers to get him off. 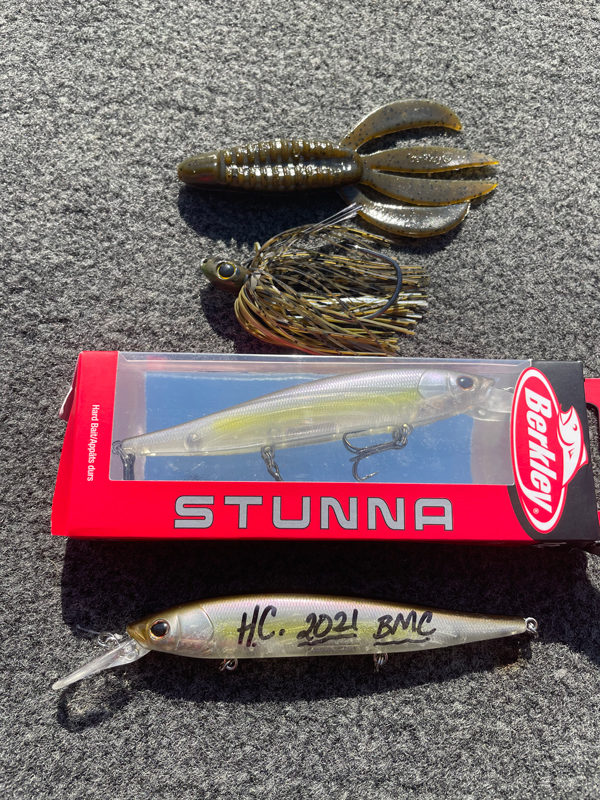 > Jig: 1/2-oz Picasso Hank Cherry Straight Shooter Jig (“blush flash” = gp/blue) with various trailers including the new/not yet out Berkley MaxScent Chigger Craw (pumpkin green flake). “I literally would put different trailers on it to make me think I was throwing a different bait.”

Trailers were gp/blue, pumpkin/green, sometimes he added a little chartreuse on the tips – to imitate bluegills:

> “I think they were tired of seeing crankbaits, spinnerbaits, Chatterbaits, all that stuff. I’ve done it before at home when the shad are spawning heavy [and] everyone’s trying to catch ’em on a white jig. I switch to a bluegill color…I even caught white bass on it [in the Classic].

> “I don’t think the trailer was as important as getting as close as possible to the tree. If you hit the tree even better. …bite would happen as it was falling.”

> “…around willow trees on that point. They were in 2.5′ of water. The point had current, had shad…the shad were going away….

> Why he wasn’t flipping green bushes like almost everyone else: “I tried to find something just a little different….”

> “…just showed me the lay of the land. I used LiveScope a bunch around those points to see if any extra flooded bushes happened to be out a little further…using mapping more. trying to figure out where the higher percentages [areas] were.

> “I have utmost confidence in my Garmins. They show me whatever’s there, and I felt safe running the lake with them.”

> “I’d like to give big thanks to the fans and people in that region, for the support they gave me all week following me, especially that last day. I was struggling with the heat…few [spectator] guys could tell I was hurting and they didn’t let me slow down. If I got a little lackadaisical, they’d jump my b*tt, like ‘Come on! Let’s go! Keep going!’ The support was absolutely phenomenal.

> “My family is the best…people praying all over the place for me. It really still hasn’t sunk in…when I get home and put the trophies side by side, that’s when I’ll probably break down. You can’t even dream this up.”

How Ott DeFoe won the Harris Chain BPT
ALL the baits from the 2021 Bassmaster Classic!