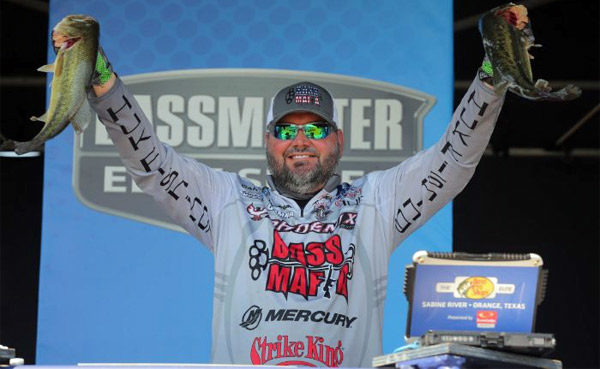 In the Sabine River Bassmaster Elite, a limit fish could weigh less than 1 lb. Winner Greg Hackney wanted nothing to do with those dinks, as his 48-05 was almost 5 lbs higher than 2nd place. Here’s how the Hack Attack won it.

> “We’ve been there before so I had some experience. I finished 5th the last time we were there…knew some better fish were there…weighed a handful of fish in the 2- to 4-lb range.

> “When I got bit in practice in those areas where I’d caught those better fish before, it helped my confidence. Plus I saw several fish in practice get the frog or buzzbait [hooks were cut off]. That’s the cool thing about a topwater lure in practice — it’s not like you’re shaking them off and have no idea. I knew I was around a good many 2-lbers.

> “The deal was I found a bunch of areas in a 3-4 mile stretch that had a lot of fish in them. I ended up concentrating basically on 2 places…really just because of the number of boats. Every place I’d found them a bunch of other people did too –it was wall to wall boats. So I concentrated on areas where I could move around the best.”

> “[The other competitors he saw] were fishing totally different from the way I wanted to fish. Almost everybody I was around was flipping a piece of plastic. I really stayed with that buzzbait and frog — it’s kind of a typical summer deal get them going that way…better than average fish.

> “I had 2 deals — a section of a canal with deep wood, and a section where coontail was growing in the middle — where all the bigger bites came from. It was a target-rich environment [bank structure], but it was a typical tidal river deal where they don’t migrate in the summertime: They sit in one place and wait for the water to move by them.”

> [Most of his fish came on a] “1/4-oz Hack Attack Select Buzzbait (white and black), which is an Academy-only bait. The first day it was all about the white one, but the weather was slightly different and I couldn’t get them to want the white one after day 1. 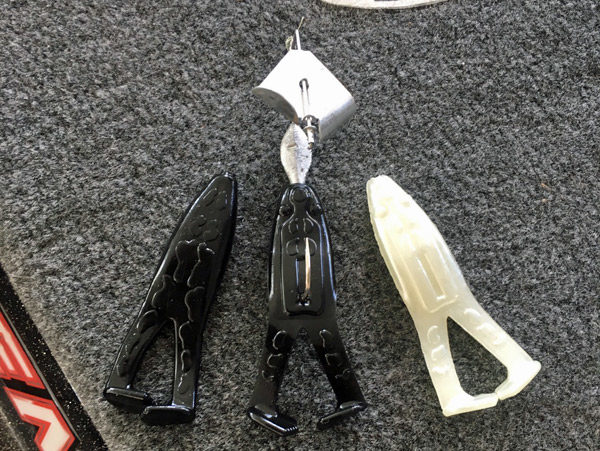 > “…no skirt. Those fish wanted a really slow retrieve — seemed like the more time the bait spent over the top of them, it aggravated them into biting. That’s why I went with the toad instead of the skirt.

> “That [Strike King Super Toad] is made for a buzzbait. It’s wide but real thin plastic, so the hook sticks right out of it. Other [toads] are thick because they’re made [to be thrown alone].”

> Even though he fished slow — “barely turned the reel handle” — he liked that faster-speed reel because “when they get it, you can move a lot of line if you need to.”

> “That’s a little less rod than I typically throw on a buzzbait for 2 reasons. I made a lot of short casts under those trees, so with a shorter rod with a shorter handle you’re more accurate. And that softer rod keep you from taking the hook away from little fish. Anything 1.5 lbs or bigger [at the Sabine] you want to make sure you weigh it in. Those little fish will play and I downsized a little bit because of that. I usually use a 7′ 2″ or 7′ 4”.

> “The first 2 days of the tournament, the buzzbait was dominant big-fish lure. After that, the water stayed high longer and some of those fish started to come up…coontail and lily pads on the edge of the drop. It got hot and slick.

> “We had the best tide on day 1 — the longest period of the lowest water. Day 2 we had less, day 3 started getting away [from low water] completely and day 4 we had the highest water. So some of those fish, when it got hot in the afternoons, sucked up under those mats in the channel.”

> For those bass he fished a Strike King Sexy Frog (stump jumper) on a 7′ 2″ Quantum Tour PT Rod, the same reel and 65-lb Gamma Torque. He likes the 65 braid because “it doesn’t impede the action, casts good and I can fish it all day and never retie unless a mudfish messes it up or something. 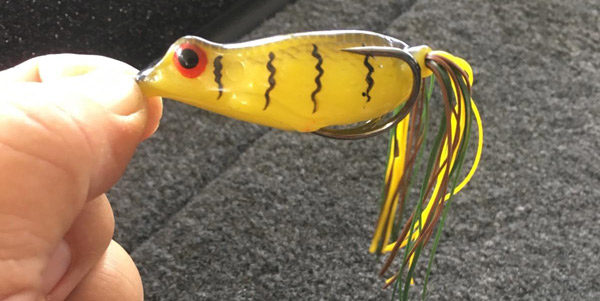 > Why that color frog: “I had a couple bites on white and black ones practice [but on day 1 one of his fish spit up] a goggle eye as big as my hand. The fish are looking the bottom of the frog. Those goggle eye are black on top and have a yellow or orange belly like most sunfish. So I went to ‘stump jumper,’ and they were swallowing it after that.”

> “I flipped a Rage Bug (bama bug = half junebug, half gp) a little bit. I could catch lots of fish flipping — I’d pick up that Rage Bug and within 10 minutes catch a keeper — but they were all 12-13″ long. I never could generate a good bite flipping.

> “The T-H Marine Eliminator trolling motor nut really silences the trolling motor. I run a MotorGuide trolling motor, which is already quiet, but you put that nut on it and it completely silences it. I fished the same fish over and over. When you’re fishing a ditch 20′ wide making 10′ casts you will be close to the fish and need to be silent.

> “That T-H Marine Atlas Jack Plate was key too for getting around in that mudhole.

> “I run Garmin units — a 7600 series GPS Map XSV 7616 on the console, and the front two are 7612s (one Panoptix, one down and side imaging). They helped me find those better stretches that had grass growing in the middle….

> “I burned 11.6 gallons of gas in 4 days. I spent the majority of my time fishing. It was one of those events where I got blisters on my fingers.”

How Drew Benton won the Travis Bassmaster Elite
How Ish Monroe won the upper Mississippi Elite
To Top
We use cookies to ensure that we give you the best experience on our website. If you continue to use this site we will assume that you are happy with it. Cookie settingsACCEPT
Privacy & Cookies Policy