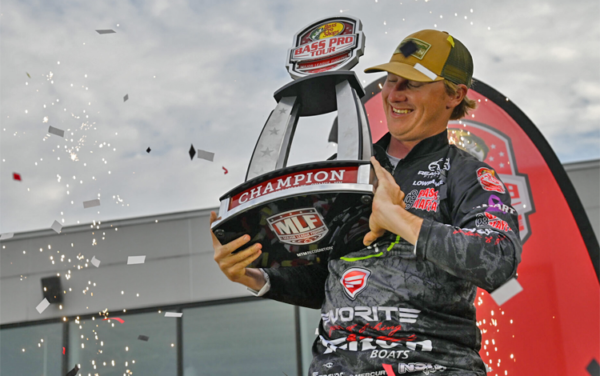 WTHeck! Dustin Connell won another Bass Pro Tour event?!?! I mean, he just won the last one – at Cayuga, NY – and before that won another one this season at Smith Lake, AL! Has anyone else won 3 tour-level events in 1 year before? Wow. Here’s how this one went down.

> “…I came up and pre-fished for this one before the cutoff. I’d been to Mille Lacs before and…I had confidence in certain areas of the lake. But I know that wind blows 24/7 there and the wind was gonna be a big factor. So I spent those 4 days of pre-practice all over the lake…so I felt confident [he had areas no matter what the wind did].

> “I practiced based off the wind. I wasn’t worried about it – I was just looking at the tournament. I knew during the tournament it was gonna blow out of the S/SW a pretty good bit, which was kind of abnormal for this time of year…. I knew that the south end would be the biggest player for me because you could physically fish.

> “I went into the tournament thinking the fish would be a lot shallower than they actually were. My best bite was 15-20′ on isolated rocks, isolated boulders…[stuff on] rock veins that run throughout this lake. These fish really use that wind and set up on those places to feed.

> “I idled the majority of my practice. I didn’t fish a ton – I needed a little zone where I could run a lot of areas…. That was my plan, to fish the wind.”

> “I could not get an early morning deal going all week. I knew what these fish would be doing at about about 9:00-10:00, but we started at 8:00. It took the fish an hour or 2 to really start setting up. I think early they got shallow and they roam overnight. If we launched at daylight…could’ve smashed them up shallow….

> “I never found a shallow deal that was really that good. I just kinda survived the first periods.

> “The 1st day of the tournament I fished the south end of the lake. More or less I sampled everything I had. I was into the cut well…wasn’t really concerned about winning the round after the first 2 days. …advantages and disadvantages of winning a round. Alton was gonna win the round….

> “I got to idle the whole 2nd day because I made the cut and felt confident enough about the Knockout Round. …3rd period I got to go practice and gained on all this knowledge I had [about the S/SE area of the lake].

> “Fast forward into the Championship Round…here comes the wind. I felt really good about it and started running all my stuff. They were not set up yet…cloudy morning championship day.

> “I started on the east side, where I caught them during the Knockout Round. But it wasn’t happening, so [at around 10:00] I said, ‘We gotta go’ and rolled back to that far south end just basically to get out of the wind.

> “That’s when my tournament changed. I made an 8-mile run that took 20 minutes out of my time…and in this format 20 minutes is a long time. I started running places I’d idled and never fished, stuff that I’d marked.

> “They set up in that 3rd period, and I got after it. I’d run to a place, drop on them twice to see if they were there, and if not I’d get up and go to the other place.

> “My main pattern was running as many isolated places as I could. I’d pull up, catch 1-2, leave, let ’em set up. I had a good milk run of places. I won that tournament on maybe 12-15 places I just rotated through. I’d run through where I caught one earlier and they would be set back up.

> “One of my best places was just significantly bigger rock. It did not have to be the world famous giant rocks in Mille Lacs – because those were the highly-pressured places. All these guys know how to use side imaging, all that stuff, [so] a lot of that stuff was found already. I had to find the sneakiest stuff I could.

> “If I was on a flat that did not have a lot of big rock, I would just find the biggest in that area. Sometimes it would just be a rough patch on a sand flat – anywhere those fish could relate to that was different.”

He only fished dropshots: “I never caught them on a Ned rig all week.” He had 6 dropshots on deck.

> “The main [rig] I used was 3/8-oz – I felt like I could see it better on my electronics [Active Target] because it had a slower fall…track as it was going down…get it near that rock better.” Same weight, 1/0 Googan Weedless Dropshot Hook, Googan Rattlin Ned (“go goby” was best, also “Canada craw”). “Any kind of crawfish color. All these fish eat crawfish big-time.”

> “I threaded that bait on there. The main reason I like threading all my dropshot stuff is that a lot of times those fish up there really nip at the bait. I feel them tapping at it, and instead of them pulling my bait off, they would nip at it and I would get ’em.”

> “The biggest key for me was making very accurate casts. I would roll up to these places and be as stealthy as I could, and make a good pitch to ’em staying like 50′ away. Everyone wanted to get close. If I got right on top of those fish I’d see…sometimes they would be suspended, and when I would get on top of them they would ease off and swim to the bottom.

> “It was just being efficient – like knowing when to leave, knowing when to stay…understanding how they actually set up. I played the quantity deal: The more places I ran, the more fish I put a bait in front of. That was the deal for me – I got out there and hustled.

> “That’s how I won that tournament. I just fished hard and fast.” 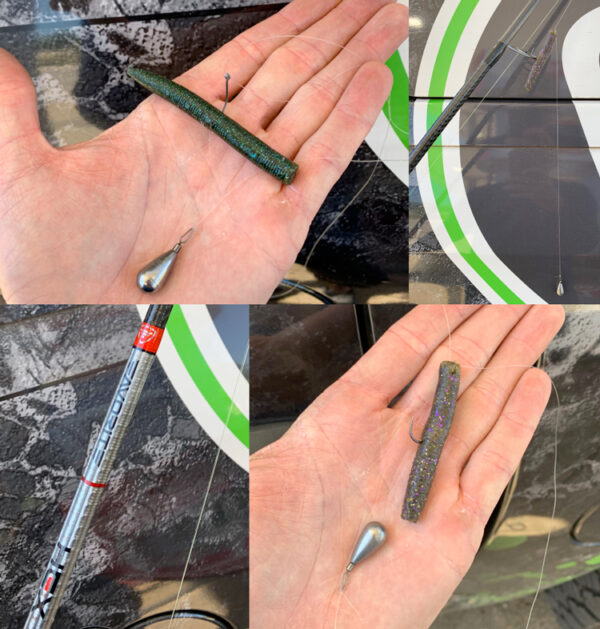 > “Side imaging, just idling, using my side scan, finding these areas.

> “A lot of times in practice I would throw down the trolling motor and pan over there to just see if they lived in those areas…finding those hot little areas where they’re at. I could pan over there [with Lowrance Active Target] without messing up the fish….”

> “I’m gonna shout out Triton Boats. I ran my boat in big waves all week long, and just being able to run that big water, to get to and from my places and not take any over the bow…being able to get there smooth, I guess you could say.

> “My graph setup is bada**. I run 4 Lowrance 12s and the MillerTech lithium batteries – those things are awesome. I run one 12-volt MillerTech battery and runs all of 4 of my graphs all day long. [I asked him – no backup?? – and he said no.] “We’re not running any livewells. If we did I’d have 2 in there.

> “I’m a big believer in that Sea Clear harness. That thing is very efficient with the graphs. My graphs read clear daylight to dark.”

How Austin Felix won the Oahe Bassmaster Elite
How Keith Poche won the Red River Open – after overcoming some sabotage??