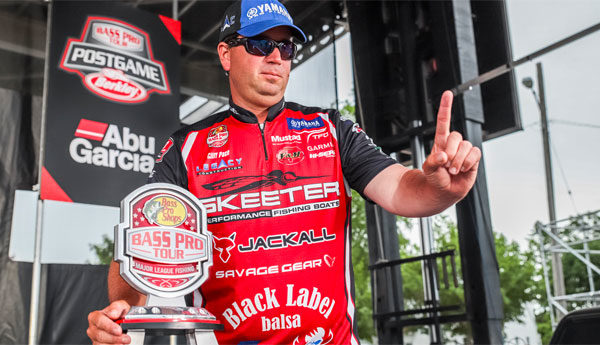 If you thought Cliff Pace wasn’t lighting up the scoreboard on the Bass Pro Tour, you were right — til the last 3, when he finished 7th in #6 on Table Rock, then 23rd at #7 on the same lake, and then 1st last week. Here’s how he won the last BPT of the year, held on 3 different lakes in WI.

> “My whole deal was just trying to find areas with the best groups of fish. Because we were up north, I felt like the fish could accept the pressure a little better than other places we fish. …just be around the most fish and just stay put — I would re-fish stuff more here than I would on a southern lake.

> “The fish up here are normally easier to catch — I caught fish other competitors caught…hook marks in their mouth. [So his plan was to] stay out on the best population of fish and grind it out…different baits, approaches, going down banks in different directions, just swapping it out.

The first round was on Winnebago, the second was on Butte des Morts, a lake in the Winnebago system. Cliff says he fished both lakes the same:

> “Day 1 I ran to what I think was the best area, and decided to cover as much water as I possibly can. Other competitors were in there but they were fishing slow [finesse-fishing] — I fished fast for the 1st period using 2 different crankbaits: my own Black Label CBS 1 (red craw, 1= 2″), and a Jackall Aska (squarebill, brown craw). I covered as much water as I could to catch the aggressive fish…enabled me to have a really good round.”

> “After that, I fell in with everyone else’s finesse-fishing approach…did catch some swimming a jig and even flipping some willows. The swim-jig was a 3/8-oz [signature] V&M Pulse Swim Jig (b/b) with a V&M Wild Thang Craw (b/b), and my flipping bait was a V&M Flat Wild (gp, 1/4-oz Elite Tungsten weight, 5/0 Mustad Straight Grip Pin Hook).”

> “When things got real hard in the 3rd period — really no wind — I switched to Jackall soft-plastics. …a Yammy Fish (gp fish) rigged on a 1/8-oz Boss Screw Cap head (1/8)…like a Ned Rig mushroom head with a screw-lock keeper. When I’m fishing shallow docks and whatnot I can skip, that bait never gets out of line or gets messed up.

> “…fished shade, boat docks, isolated cover. The main thing was doing it from a distance, really long casts. The fish had so much pressure so I kept my boat further away [than other guys]. I felt that with longer casts and light line I could get more bites than the other guys.” 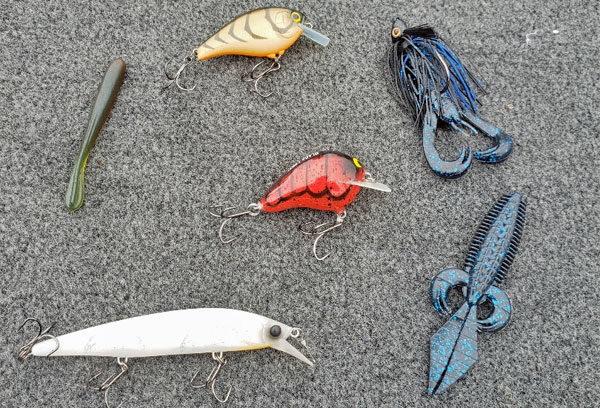 > “This lake was totally different…gin-clear water. …I knew it had a population of both [species]…felt like I’d have better odds of finding a group of smallmouths. …can catch quality [largemouths[ but you need to cover a lot of water. I felt like maybe the smallmouths spawned first and [post-spawn] had a chance to get grouped up.

> “I idled a place in the ride-around [a pre-fish without fishing] and saw some fish on the bottom and breaking on the surface. I chose to start there. [He saw the bottom fish] and suspended fish with Garmin LiveScope and used it to pick them off.

> “That dried up at the end of the first period. We had a big system come through…hour and a half weather delay…pouring down raining, and the wind was blowing real hard. When they let us back on the lake, I fished a Jackall Rerange 110 jerkbait — matte white and one I scraped all the paint off and made clear. I used those 2 baits for the remainder of the day on wind-blown main-lake flats in 8-12′. …getting reaction bites — that’s how I ended up catching the majority of my fish.

> Jerkbait setup: Same rod and reel as the crankbaits, line was 12-lb fluoro.

> “The main thing was I didn’t overanalyze things. I didn’t have to. I had one of those events that when I saw I needed to do something it worked really quick. That’s what you have to do to be successful — you need to figure things out fast. Every adjustment I made worked, and that’s what led to me winning the event.

> “Garmin Livescope helped a ton on Green Lake when I was fishing offshore.

Christies have lost it? Super villain bassin, Good shallow summer spots
Cliff Pace and other BPT baits, Dog paddle bait, Stick with white chartreuse
To Top
We use cookies to ensure that we give you the best experience on our website. If you continue to use this site we will assume that you are happy with it. Cookie settingsACCEPT
Privacy & Cookies Policy