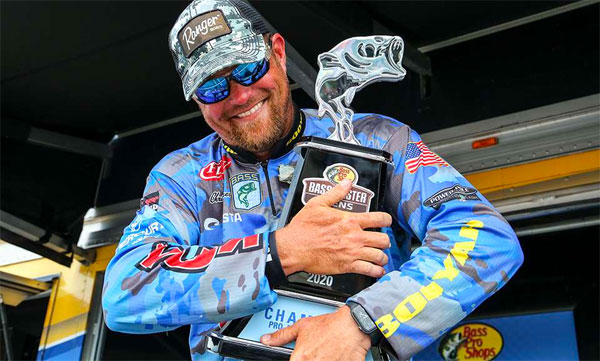 Home “lake” jinx? Check. Fished history? Check. Astronomical odds to get back in the Classic? Check. Welcome to Chris Jones’ world dude! He did this exact same thing in 2013 — Open outta Muskogee >> win >> Classic — here’s how he did it this time.

> “…before the meeting I knew I wanted to fish 1 day up at Muskogee and 1 day at Kerr Pool (pool 15 below the launch).

> “If I got to make the final day, I knew my best chance to catch a good sack was at Kerr.”

Thursday he went to Kerr:

> “It was sunny and hot, not much wind. I had several bites but they’d roll on the jig so I’d have to flip back in there [water willows] several times with a YUM Bad Mamma or Christie Critter (both black neon).

He caught 1 on a BOOYAH Poppin Pad Crasher (dart frog = black/yellow), and the other 4 were on the plastics which he flipped after fish swirled on a prototype white BOOYAH swim jig (white) with a 3.25″ YUM Craw Chunk (pearl silver flake).

Friday he “played it safe” and stayed in Three Forks Pool (pool 16), a creek he knew:

> “I knew I was in contention and knew I had to catch a limit to stay in it.

> “…isolated logs and stumps I knew guys didn’t beat up in the week, stuff I’ve known for years. I probably ran 100 pieces of it to catch 7 keepers.”

> “I lost about a 3-lber that really hurt, and I was sitting in 8th going into the final day. I’d told myself that if I ever made the top 12 I’d never leave Three Forks because they turn all the [release] fish loose there. There’s the river and current there, and there’s nowhere for fish to go except to the bank.

> “…my only chance was go to Kerr. When I left the house it was a little foggy and windy, drizzling rain…major front coming. Whenever I’ve caught a giant sack at Kerr, it’s been that situation.

> “It was overcast when we put in — it rained off and on. We were right ahead of that front coming.

> “Basically I said I’m gonna finish 12th or catch a giant sack. So I ran down there and it was on. I caught 30 keepers, lost 2 keepers and still weighted 19 lbs.

> “I fished the same way I did Thursday, but the points I caught them on [0-3′] had to have wind on them and I switched to black/blue because it was real dark.”

> “You had to pump it…shake that jig when you got around a little clump of water willow. When it was matted, I’d reel it up quick, give it a little pause, let it sink and they’d get it.” 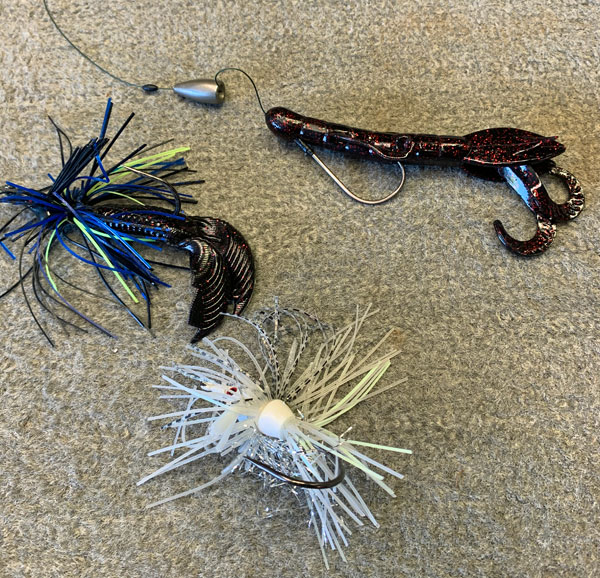 > That BOOYAH swim-jig will be out sometime next year. It’s based on an AR “secret” jig that Chris and a few other guys wanted modified. Word is it comes through hard and soft cover real well and it doesn’t roll over. Will be 1/2- and 5/16-oz.

> “My Garmins were key. I was running stuff that was real hairy [so the maps were key] but the most important part was that new Garmin Force. It’s so fast and so quiet — I could keep it on high and go point to point [without starting the big motor].”