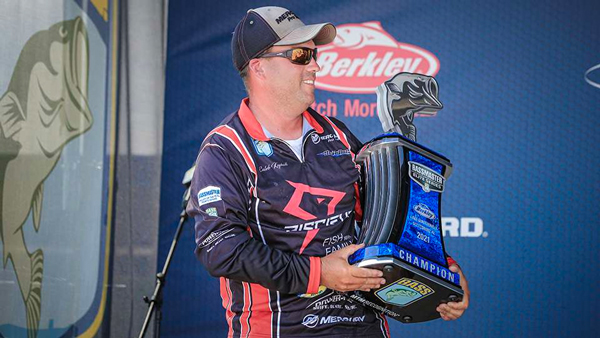 This was the 3rd time the Bassmaster Elitists had been to Gville in the last 14 months – BUT the 1st time they’d been there this time of year. And even even though Caleb had also fished the lake in FLW and Anglers Choice tourneys, it likewise was never this time of year.

Plus the fish seemed to be behind or at least off schedule a bit, so the bottom line was all the guys were on equal footing…and the lake wasn’t giving up the bigs easily – except to Caleb, who led on day 1 and then every other day to win it by 16-02. EMOJ In other words, it was like he weighed 5 days’ worth of fish in this deal vs everyone else! Here’s how he put it together.

> “…been there quite a few times…15th time I was there…. The lake has changed a lot the last several years with the influx of eelgrass. It used to be hydrilla and milfoil pretty much everywhere and just spots of eelgrass, but now anywhere it’s shallow there’s eelgrass everywhere. Even if you’re just running down the lake, if it’s a real calm day, it’s just matted up everywhere.

> “I knew had that had changed the system [to make it] probably little bit tougher, and it was late spring…don’t think those fish were nearly as far along as they normally are. Usually this time of year, if they’re not fully on the ledges they’re definitely a strong presence out there. A couple guys were even still seeing some on beds.

> “Those fish were quite a bit shallower than they normally should be. I did half a day of graphing [in practice] and didn’t find much offshore. The rest of the time I was pretty much looking in 8′ or less, and lot of that time in 4-8′.

> “…JackHammer quite a bit, crankbaits and stuff, running points and stuff like that, trying to catch them out of that eelgrass. I’d get bites but not the size I was looking for.

> “The only really large bites I had were flipping so that’s what I stuck with in the tournament.

> “I had 4 areas I thought I could exploit in the tournament, but I wound up only [fishing] 2. Luckily they were phenomenal areas…so many fish….”

> “The first area I hit every morning right after takeoff…by the Goose Pond campground area. You can pretty much idle there from the ramp. It’s just a spawning cove, basically, just a mat of milfoil…just gradually gets deeper as you go out into the bay

> “The fish were in 6′ of water…little secondary point before going out into the marina and then into the main lake. They were stacked on one tiny little spot…a radius of about a 100′ circle you could catch them in with 1 tiny little sweet spot about the size of a boat…a little harder spot down there, no indentation or anything, just flat…always better fish than the surrounding area….

> “The 2nd area I’d go to pretty much 8:30-9:00 and was a much shallower type of flipping spot. …a matted up main line of a real green type of leaves about the size of a quarter – I don’t know what they’re called. They’d get gnarly underneath and form a mat. Out from it was scattered patches of it – isolated scattered mats [20-60′ wide] where I was catching all my fish…2.5-3′ deep, also a little bit of hydrilla and milfoil mixed in, and pads and eelgrass.

> “…just off the main river. I knew it would reload every day – it had new fish coming to it the entire tournament. That really helped me out because my first area was fizzling…the size there kept shrinking. 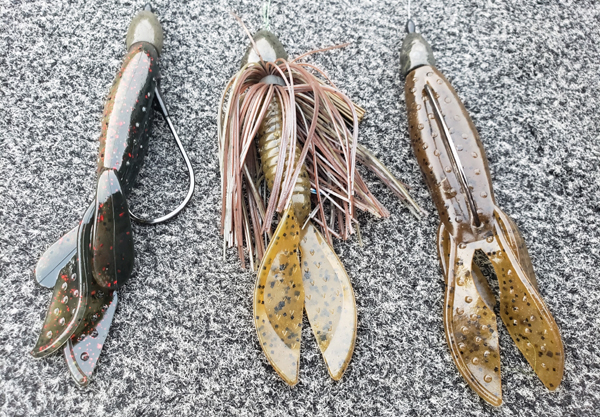 > Electronics: “…hardly at all. Pretty much to tell the time of day and waypoints, and that was it. Power-Poles were a big player…Power-Pole down whenever you catch a fish, and flip out the area….”

> “The other 2 places I had [but didn’t fish]…one was a pad field where I was getting quite a few bites on a swim-jig, but the bigger ones were 2.5 to 2.75 lbs so it was not a big-fish area. The other place I had was another flipping spot. It was small…I was saving it if I got into trouble with a limit later in the tournament…go in there and catch a couple keepers, maybe 1 decent fish.”