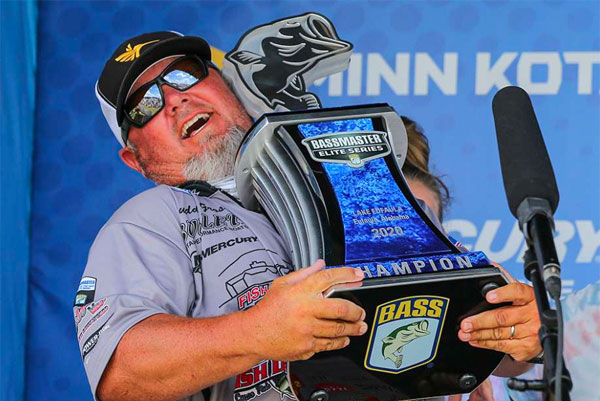 GA’s Buddy Gross won his first blue trophy this weekend, comin’ from 10TH PLACE to squeeeeeze by ’19 AOY Scott Canterbury for the win. Buddy had a massive 27-11 on the last day for a 4-day weight of 84-08 — and Scott in no way left the door open, catching a solid 19-03 the last day.

Guess it’s no surprise this is Buddy’s first blue trophy cuz it’s just the 2nd Elite he’s ever fished! What it’s like:

> “I’m just getting it processed to be honest with you. I can tell you that the media and sponsor attention and everything is a lot bigger. And coming from behind made it a little more precious to me….”

Here’s what went down.

> “I got a little bit of pre-practice in, so I already determined to look at the brush game before I got there [for the tourney]. I found 300 brushpiles in pre-practice. So the first thing I did the first morning of practice was run the brush I had. I caught a couple quality fish before 9:00, so I decided to spend the rest of practice looking and marking in an area I thought would be the best.

> “After I found brush I went looking for offshore fish, but didn’t find any I thought would beat the brush.”

> The brush was in 5-12′: “I had a 20-mile stretch…spread it out on purpose because I watched a lot of my competition fishing the same brushpiles and I tried to stay away from that.

> “I was fishing for where the fresh fish were just pulling out. Some were on the points…first places coming out, or pockets close to the river…all staged-up, post-spawn fish.”

> “Every morning I started off on something new because the morning bite was less attractive than the afternoon bite. The bite got better the more straight and up and down [the sun] was.

> “I had a milk run of about 5 brushpiles. I fished 60-70 a day, but if I got within a mile or mile and a half of those 5, I’d hit them multiple times during the day. I think they just had fresh fish all the time. I don’t think they were residents — they were just coming and going.

> “The first day I had multiple rods out, trying little bit of everything. After the 2nd day I had 3 rods on the deck: 2 swimbaits and a jig. The first 2 days [he mostly fished the] swimbaits, then I switched over to the jig.

> “I tried my best to hit the brush. I tried to cast a pull or 2 past it, and work it all the way to the brush…try to get up across the top of it rather than down in it, to get them to come get it — that was a better bite. I didn’t want them to hit on the back side of the brush…harder to get them out.

> “The wind blew out of the south the first day and a half, and when it did that, I threw against the current — downriver because the wind was stronger than the current. 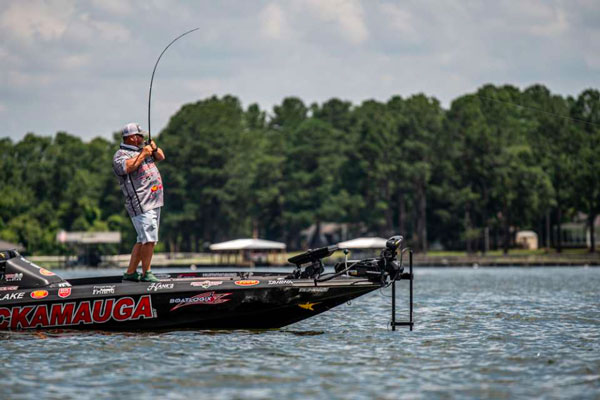 > “The Humminbird 360 was key. Every time I’d pull up I’d figure out the perfect cast to hit [the brush] as effectively as I could. If I didn’t get bit in 3-4 casts I was leaving. I wanted to hit the ones that were actually firing…. Later in the day if you felt good about [a brushpile]…9 times out of 10 you could come back after lunch and get a bite.

> “…couldn’t see fish on a lot [of the brush he fished]. The 3rd day I sat on brushpile — Spot-Locked, I could see it the whole time on the 360 — and caught 15 out of it. I think a lot of guys weren’t fishing the ones they couldn’t see fish on.

> “I fished everything, whether I could see them or not. I made a few casts and if I didn’t get bit, I’d leave. I had that trolling motor up and down 500 times a day.”

> “We’re throwing at brushpiles and ledges further than we used to. We’re making 100′ casts now, and being able to penetrate a fish 100′ away from you [is key]. Fluorocarbon seems to have more stretch than what it had….

> “I’ve been working on a jig with a good hookup ratio…had trouble keeping a lot of them on, so I downsized the weedguard and hook to get penetration.

> “A buddy of mine is a sponsor and friend…owns BoatLogix [graph mounts]. We’ve been working on [a jig], been perfecting it — it’s coming soon. Nichols will start a line with this type of jig.

> “It’s kind of a hybrid between a heavy and finesse jig: 3/4-oz with a lighter wire [hook] and lighter weedguard, and it doesn’t get hung up. I lost 3 jigs in 4 days, so it’s pretty special.” 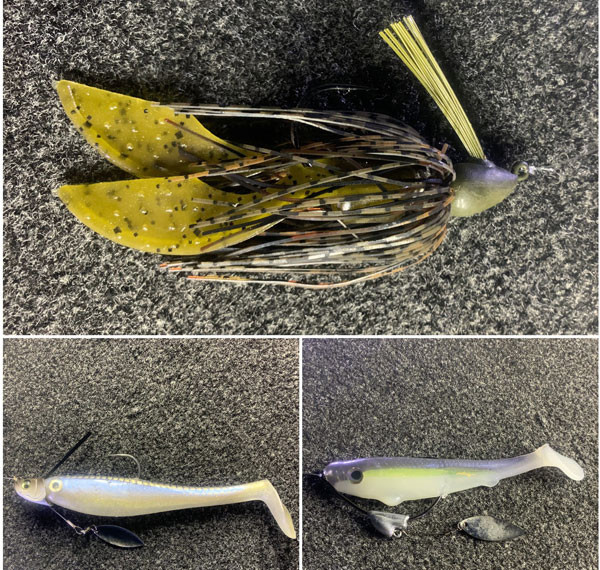 > 5″ Scottsboro swimbait (natural light), 3/8-oz 8/0 Owner Beast Flashy Swimmer belly-weighted hook, same everything except the rod was XH: “You need that hook driven a little harder. They’d bite that bait above them, crush it and run straight toward me.”

> He’s OBSESSED with long casts and hooksets at the end of those long casts. Since the FLW Toyota Series finished up on Eufaula the day before the Elites started, he noted that the brush out there had been pounded big-time so a stealthy approach was key.

> When he says pressure, he doesn’t just mean actual casts: “…the pinging and thrusting of trolling motors, boat traffic coming by and slapping the bottom of the boat….”

> He says Nichols won’t rush the jig out — they’ll “make sure it’s right.”