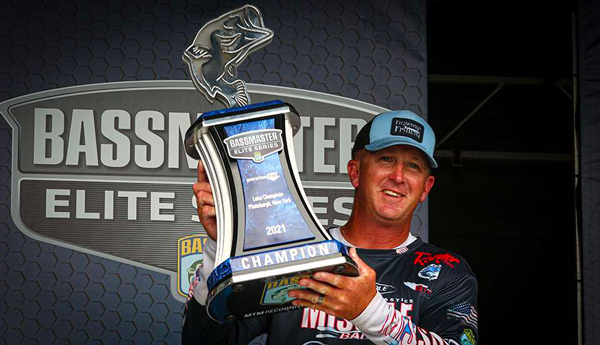 Short answer: bigger fish. For real! When the fishery’s so good AND the weights are so tight, ounces – let alone 1/4s of lbs – make a huge difference. So finding those fish was Bryan’s (and everyone else’s) strategy, and he did it…by fishing for fewer bites in a fishery where it’s tough to do that.

> “On Champlain, a King Kong mega-bag of smallmouth is like 21 or 21.5 – that’s phenomenal. But you can get 23-24 lbs of largemouth if everything goes right. But there’s just way more 4-lb smallmouth than 5-lb largemouth.

> “I sampled so many things – grass, shallow spots, deep spots, docks. I’d get little hints here and there, but it ended up being isolated clumps of really clean milfoil was my deal…8-10’…could be anywhere on that lake.

> “The bottom was real clean – that’s why those clumps were special…nothing else [for the fish] to get on.

> “The best [clumps] I had, you couldn’t really see that good til you were right on top of them so they were about 2′ under the surface.

> “I had a lot of ammunition for 3 days…didn’t run out of fish until the final day.”

> “I ran every single [isolated milfoil clump] I could find that I could stop and fish. It seemed like there weren’t a ton of fish of fish on these places – just a couple but they were better-quality.

> “By the 2nd day, mid-way through, I really started to see that some areas just weren’t producing…’Okay, I just need to concentrated on these [better] places.’ I don’t know why [some were better or worse] – they looked the same.

> “I would use LiveScope…I was throwing to stuff before I got to it – real long casts. LiveScope was 100% critical because I could pull up, see the clump of grass and make long casts…sometimes I’d see the fish swim up and grab my bait. Some places I’d see 2 of them – gave me the confidence [to stay and catch more].

You might have seen that he LiveScoped his last/winning fish too, off a buoy cable.

Asked him if he experienced the deal where releasing smallmouth shut down the bite:

> “If you lost a smallmouth or largemouth, it seemed to really [kill] that spot…had to leave. It would calm down…let it rest at least 2 hours or so and you could probably get lucky again.

> “I would try to throw tight at [a clump], but many times I’d go past it or to the left or to the right on accident.”

> “I would throw it on shallow bare places…on nothing…bare bottom, sand and I would say 8-10′ – mainly on the main lake.

> “This is how stupid that bait is: Throw it out and reel it in real slow.”

> “I’m really good friends with Austin Felix and Bryan New, and both of those guys got on that spin bait deal and clued me into it. That gave me the confidence to run that. And I needed to do that in order to get a couple key fish. I’d like to give them a little shout out.”