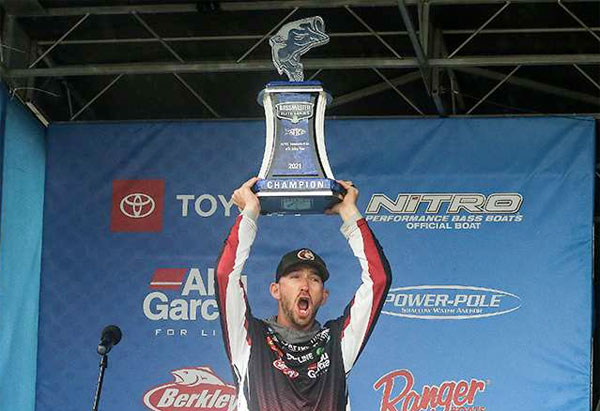 Ever heard of Bryan New? If you say no, you’re like a lotta folks – because he’s a Bassmaster Elite Series rookie who won the first dang pro tourney he ever fished in! He never even fished a B.A.S.S. event til last year!! Crazy. Here’s how he did it:

> “Practice actually sucked, it was bad. I found 2 shell bars, had 2 bites apiece on them, and left. That’s all I had til the last day.

> “I knew the weather was getting right for the perfect storm [bass moving up] to happen. I’ve always heard about it but never seen it. I thought it might actually happen this time.

> “…hadn’t been down to Dexter. I went down there and it sucked, but late in the day I started flipping pads…had 2 bites fairly quick…gave me the confidence to do that – to go to fresh areas and do it.

> “I was feeling like I had a chance to do good. I knew I had the shell bar stuff in my back pocket. I knew I wasn’t going to catch a big bag there but it could help me fill out a limit….”

Said he’d catch 2 then cut his hook off.

> Day 1: “I just went fishing after that fog delay. [He went to Dexter]…came back with 3 little ol’ fish. I had 20 minutes when I got back, caught 2 off [a] shell bar real quick then had to go in. Without those 2…wouldn’t have made the final-day cut.

> “I had 2 things going 45 miles apart. Dexter…didn’t go after the first day…took an hour and 7 minutes. Astor Canal was 40 and a 10-minute idle. I fished a few stretches real quick [in the canal] in practice – 2 bites, 1 bite…real quick, like the last 15 minutes of practice. It just felt like that was the best place.

> “[Day 3] I was actually running [south] and pulled up the radar – it was really bad raining and storming. I almost didn’t go. I stopped and fished another shell bar. I put my rainsuit on and said, ‘I gotta go.’ I wasn’t there too long and it cleared up and I caught ’em…pretty dang quick. I upgraded a little bit and got to 21.

> “The last day I went straight down [to the canal]. I knew I was maxing out at 14-15 lbs on the shell bar and it wasn’t like I’d just pull up and catch them every cast. You could seem them on the 360, cast at ’em, cast at ’em, cast at ’em and eventually you’d get one to bite. I was trying to win the tournament, and I knew it wouldn’t get won with 15 lbs.

> Canal: “Every day I would kind of go through stuff I’d caught ’em on the day before, but do it quick and then go to fresh stuff. It was pretty much always random…looked right…fishing slow…didn’t make many moves, 2-3 a day…all random….

> “I didn’t want any wind on the stuff – makes it harder to fish, so I tried to stay away from wind if I could.

> “I liked more-isolated pads or more-open ones. I didn’t like ones that were really thick. If you’ve got a lot of pads, you’ve got a lot of targets. There’s a lot of places they can be, and there’s no way you can hit every one of them. So if there’s less, you can pick it apart easier. 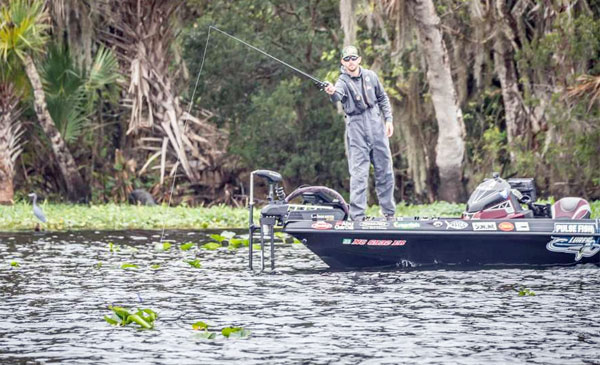 “I think they use the thinner pads and more isolated ones [for spawning]…more sunlight and light penetration. They need that…100% were spawning. I wasn’t looking at them, I couldn’t see them, but they were definitely spawning.

He had 2 nearly identical flip setups for the pads:

> “I wanted one with a little bit lighter line, a little more finessey – I would use it on more-isolated stuff or if it was really slick, no wind.

> “If there was any wind or the pads were a little thicker and it was harder for me to get the line to lay on the water and not on top of the pads, I’d go up to 1/2-oz. The last day, later in the day, I went up to a 5/16 because the wind started blowing pretty hard.” 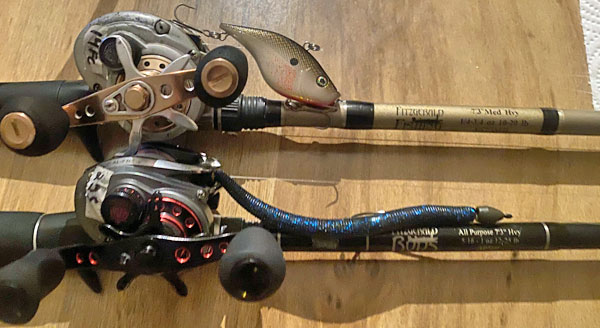 > “I was kind of stroking it or yo-yoing it. Whenever you try to make a fish bite that doesn’t want to, when you snatch it up like that I think lot of the time you’re triggering them to bite….”

> “I found those shell bars down there last year for the Toyota Series with Humminbird side-imaging. I love them. I have all 3 brands on my boat, but Humminbird is my #1 graph [he does not have a ‘lectronics sponsor]. That Lakemaster mapping…I could run the 100% shortest route to where I was going….

> “I never turned on LiveScope.”

> Why black/blue baits: “I didn’t try a different color. I’ve caught ’em doing that before in FL. I don’t throw b/b anywhere other than FL – yeah if the water’s dirty I may [throw it elsewhere], but in FL b/b and junebug’s all I ever throw. With a Senko-style bait that’s always what I do: b/b.”

> “Power-Poles definitely mattered. I was fishing super, super slow. So…definitely made it a lot easier. I’m sure I probably caught more fish because of it.”

> “2 days before leaving to go to this tournament I didn’t have a title sponsor. I posted a pic of my boat at the wrap shop, and got a phone call an hour later that said, ‘You need a title sponsor…I want to be your title sponsor.” That was Pulse Fish Lures, which makes a scrounger-type jighead. Also sponsors Matt Arey.

How Patrick Walters won the Fork Elite in 3 days
How Skeet Reese won at Okeechobee.