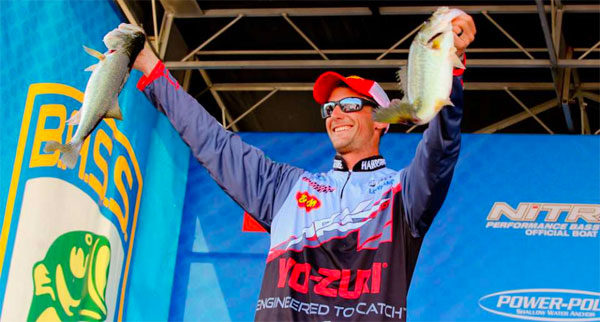 Brandon Cobb lives near and knows Hartwell — but most of the time, local knowledge is more of a hurt than a help. Here’s how he overcame knowing too many spots to stick to one area and win the whole dang deal.

> “Practice was pretty bad. It was bad even though I know Lake Hartwell pretty well. I don’t know every inch of every pocket, but I’d fished it all before.

> “I spent most of my practice in areas that are not my go-tos in tournaments. I was looking for a home-run-type thing, but I never really found ’em.

> “I made a little pass through some of my favorite stretches up in the Seneca, and I had 3-4 bites there 1 day.

> “After the meeting I had to decide what to do. I had a few bed fish all over the lake. But then I knew where I’d done pretty well from the last 15 yrs, so I figured I’d go fish up there. But there’s not a lot of productive areas in the Seneca.

> “Mostly it was just docks, spawning banks and pockets. That’s pretty much what I decided to do. It’s what I always do.”

> “Normally this time of year you catch a lot of big fish off docks. I like to sight-fish, but docks are normally my go-to to catch a big one. The 1st day…my 3 biggest ones came off docks and they were all post-spawn.

> “My practice was so bad I never got a 100% gauge on [what phase the fish were in]. But it got real warm a few weeks ago so I knew some fish spawned then.

> “Going into the 2nd day, I knew fish were spawning but I thought most were post-spawn. I tried to run the dock thing but it didn’t really work. Between fishing docks…saw more on the banks and more coming, so that’s what I did — almost purely sight-fishing. I sight-fished and fished the docks I came to.

> “…not really a specific type of bank. A lot of what I was keying on was that flooded dog-fennel grass…most of the fish were spawning in that grass.

> “I could see them fine. The only issue is that part of the lake isn’t real wide open…tight and curvy…just boat traffic will dirty up the bank. I ran into a good bit of that Sat and Sun, but I was able to fish pockets not on the main river and still find clear water.

> “All the docks were floating docks. Usually I’ll be able to figure out if they’re on deep ones at the mouth or the last 6-7 at the back of a pocket, but this time it was just random — but every bite I got was in the shadiest part of the main part of the dock…under it. Most of the dock fish I caught were post-spawn.

> “Every morning I was looking for the herring spawn. Hartwell was within days of a full-out herring spawn. …started running the herring spawn early, caught nothing but stripers…caught enough stripers to keep me doing it. I thought [eventually the largemouths would happen] but it didn’t.”

> “Zoom Fluke Stick, pinched the tail off (gp or gp/green purple flake “because I ran out of gp but it didn’t seem to matter”), 1/0 or 2/0 wacky hook with a fiber weedguard. I hooked it right in the middle. I don’t use an O-ring — you lose some baits, but I feel like you hook fish better without it.” 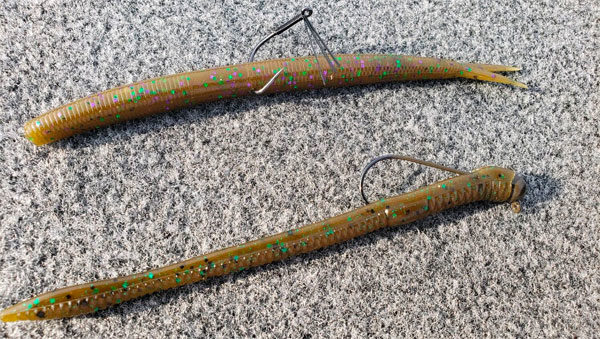 > “I had the trolling motor on pretty high, like 60-70%. I would take the Fluke Stick and basically throw it ahead of the boat to anything that looked like it could be a bed or fish. I would troll toward it…. A lot of times I’d catch them like that. If not, I’d look down at the green or dark spots…[if he saw a] bed fish that didn’t eat it, I’d spin around, Power-Pole down, throw the shakey head at them and sight-fish.

> “The Fluke Stick I basically wasn’t even fishing — I’d throw it, let it land and sink to the bottom, and when I got to it I’d reel it back in.

> “Bed-fishing with a shakey head is something I do almost all the time in clear-water lakes when you’re not fishing for 8- and 10-lbers like you do in FL. You can catch them a lot quicker with light line and smaller baits than you can with a flipping bait….

> “There’s only a few [sight] fish I couldn’t catch because they were acting funny. I could tell within 2-3 mins if they were catchable fish. I don’t think I ever spent more than 10 mins on any one I caught. My opinion is the [sight] fish on Hartwell are a little easier to catch than on other lakes. I really don’t know why.

> “That’s the only place I’ver seen that, honestly. That’s a unique thing about Hartwell. It’s like there’s not enough males for females, I don’t know [laughs]. In an Open tournament there about 10 yrs ago, we had 22 lbs off 2 beds.”

> How he didn’t fall into the “too many spots” trap: “I honestly think that’s why I had a bad practice — I knew too much…tried to fish the entire lake. But I kind of used it to my advantage in the tournament. I didn’t run around…long distances. Every single spot I fished was somewhere I knew fish used to spawn or used to eat herring…. I never ran out of places I felt comfortable with. I also [in 1 day] never re-fished anything.

> “It’s not like I was fishing 1 type of bank…just more or less areas I know spawning fish come up to — bigger spawning fish. A bass can literally spawn on almost any square inch of that lake. Because they spawn everywhere there, it’s not like you find a pocket with 20 in it. It’s like 3, then there’s one 100 yds down the bank, like that….”

> “Power-Poles were important, without a doubt. Also my Costas [Joses] with the sunrise silver lens– they were real important, especially on the cloudy days….”

> He wore a SIMMS ProDry rainsuit — that’s a matching suit above, but it’s a black jacket with gunmetal bibs.