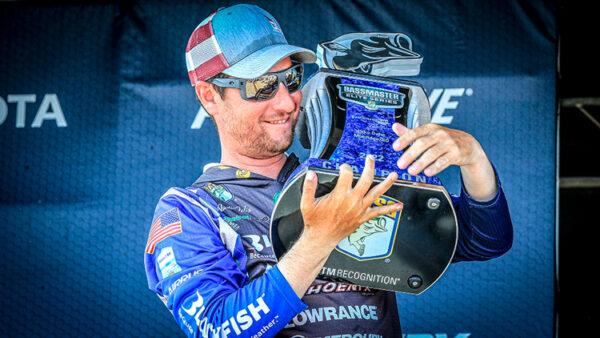 Seemed like the Oahe tourney was a lot tougher than the guys thought it would be, so not sure if it’s more or less surprising that someone got their first win there. Yep that dude was Austin, here’s how he won it.

> “All year I had this one circled on the calendar, not really because I thought I could win but because I thought it’d be the most-fun tournament we fished in a really long time. That was strictly based on pre-practice last year. The fishing out there was literally unbelievable.

> “I assumed it was going to take in the low 20s every day to have a shot at winning. But once I got there…[in] practice I had the quick realization the fish were not biting like they were last year. …definitely more pressure, and going to be a lot tougher than I originally expected.

> “I stayed in the same areas [as pre-practice]. I still felt like the bigger fish were in the same section of the lake. The lake was another 4-5′ down, so you had to slide out…same structure just out further off the bank. A lot of specific stuff I had found wasn’t in play but the same pattern was.”

> “I had a really late boat number and the fish were still on pretty obvious stuff. Even though that lake is extremely long, it fished a lot like a ledge tournament. A lot of guys were on most of the stuff, so with a late boat number I ran a really long ways.

> “I was running by stuff I marked that had 1-5 boats on them. I ran almost all the way to the bridge by the time I found something I could fish. It was a secondary or third spot, not really one I wanted to get on.

> “Day 1 was a grind. I caught 6 keepers – I lost a really good one that would have helped me a lot. It was really a struggle.

> “Day 2 was the opposite of that. I had a really early boat number so I got on the spot I wanted. My first drop I caught a 3.5 and my second drop I caught a 5.5…spot-locked there.

> “Lee Livesay pulled in, and the 2 of us spent 4 hours there. I left with almost 23 lbs and he left with 19. Just one of those dream days where everything goes right.

> “Day 3 was good…started on same hole again, but they really weren’t set up right. I figured we had scraped most of them off the top of that high spot. I left there with 2 fish and had to run a  bunch of waypoints. With half the field gone it was a lot easier to do that.

> “At one of my spots below the bridge, I was able to catch 3 good ones real late in the day on a Carolina rig. It was something I hadn’t thrown at them before. I had one in the box but wasn’t sure if they would bite it. But Lee clued me into it on day 2.

> “Day 4 I obviously had that starting hole all to myself. My plan was to start on it and scrape the last few fish off it I could. I was fortunate to catch a limit…one solid 3.5-lber and bunch of small fish, but it was a limit and that calmed me down some. 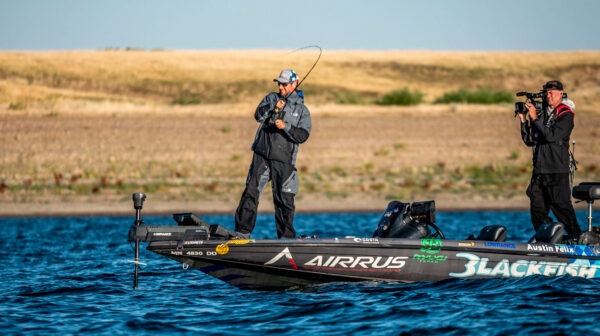 > “I knew that other hole I’d done really well on, I felt it was an afternoon thing. I told myself not to go there before noon.

> “[Around noon] I made the run, got there and caught a 3.5 pretty quickly, and that calmed me down. I caught a couple 3.5-lb fish there and a couple in the high 2s – I never thought I had sealed the deal. I kept doing the math in my head….”

His biggest fish the last day were three 3.5-lbers. 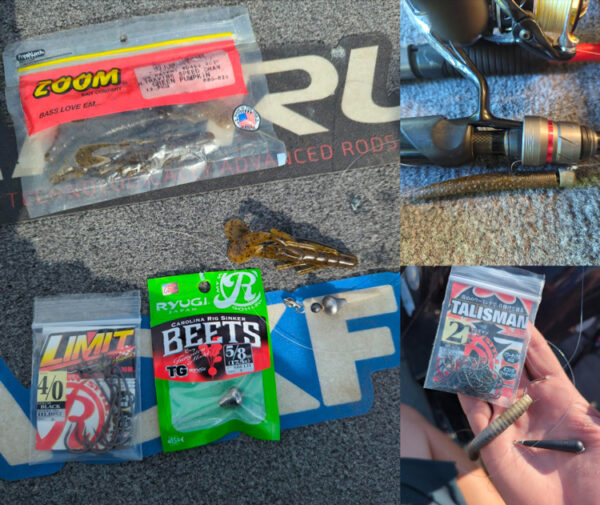 > “I couldn’t have done it without [Lowrance] Active Target. Every fish I caught was more or less because of Active Target. I caught half of them throwing at individual fish…

> “…show me where they were setting up and where they were roaming. A lot of fish would not stop swimming – those are the ones I had to target with Active Target. In my main areas the fish would actually set up on the bottom, on rocky stuff, and I would lay off on them with the Carolina rig to get more bites.

> “They were main lake points, 25-35′, with some rock on the end of both of them. They had a sharp break…to 80′ when they hit the main channel. The fish were just using it as feeding zone…swim up on those points and feed. It was flatter, shelfy stuff.

> “I’d run my side scan…focusing on the main channel break.”

> “I want to shout out Lee Livesay for turning me onto that Carolina rig deal. Without that I wouldn’t be able to win.

> “Bryan New and Jake Whitaker traveling with me. They kinda called it, but I thought they were gonna jinx me.”