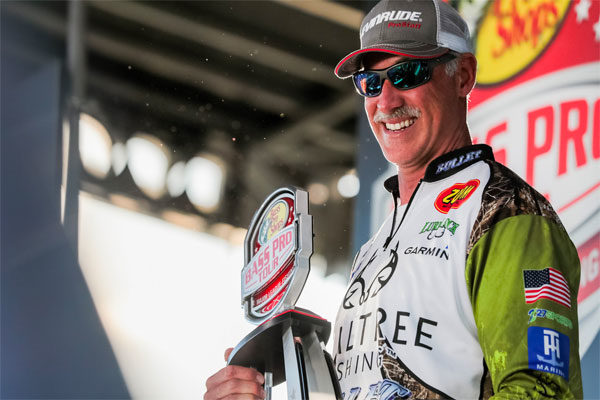 Andy Morgan lives on a private island on Lake Chickamauga, TN. He’s so focused on fishing that all he has — besides his boat and fishing gear — is his dog Chigger and a friend he calls Wilson: 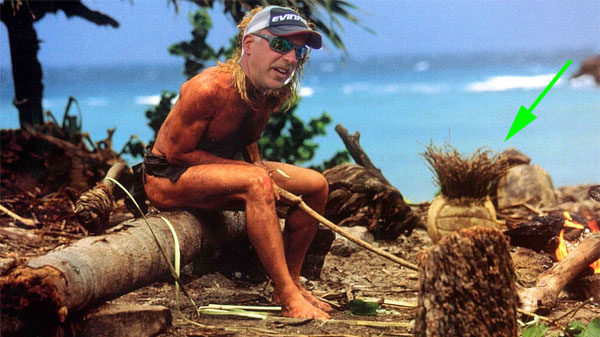 Okay, not really, but he does live right there and knows the lake. So he had a plan:

> “I wanted to stay up close to home, in the river end, if at all possible. We had just enough water — they’re bringing the water up, raising the water out of winter pool…we’re halfway to summer pool. So we had a lot of water to fish in, but not a ton and it got crowded pretty easily.”

Despite that plan, sounds like he second-guessed himself the first competition day he fished:

> “I had a pretty poor first day. I ran down-lake a ways to get started, then by the time I got back up [river], everything cleared up. Fishing pressure was an issue [he said it’s always an issue because of the Chick’s hawg rep].

> The next day he fished he “changed…started up here around home. I went to a better area early — claimed it early. [Important because “the deepest spot is 2.5′ deep so it doesn’t take much to booger that up.

> “…hard spots, mostly clay, with a little bit of rock, old stumps and some laydowns. Just points and little creek bends, dead-end pockets, old ponds that are like a foot deeper. It’s the TN river, just little backwater chutes off the river.

> “Water temp was in the 60s, and the clarity varied with the storms we had. We had some pretty big rains, pretty good wind, that varied from day to day — so water clarity was from dirty to TN green.

> “…nasty days. That was ideal. It was literally the perfect storm.

> “I knew if the conditions lined up and the forecast held true for Sunday, if that system got here and it kept the boat traffic and fishing pressure down, I thought I could win. [That day] a system came through around 745-800 — wind, rain, storms…sustained winds of 25+. Yeah, it was ideal…just makes them bite, man.

> “I was semi-protected, fishing backwaters. l didn’t have people in the way — that’s the biggest thing, fishing pressure.”

After that 2nd day adjustment, he fished the same way every day.

> “The lipless was an early thing when the fish schooled up feeding in the mornings…first 1 hour of the mornings. Then it was the Thunder Cricket — my bait of choice going down stretches of bank, covering water — and flipping the Z Craw [to] anything you saw that one might be bedded beside.”

> “Definitely my Power-Poles [were important], especially when fishing around spawning fish, where you have to slow down and stop.”

Stetson Blaylock’s Winyah Bay baits and pattern
Dean Rojas’ winning baits at the Smith Lake BPT
To Top
We use cookies to ensure that we give you the best experience on our website. If you continue to use this site we will assume that you are happy with it. Cookie settingsACCEPT
Privacy & Cookies Policy