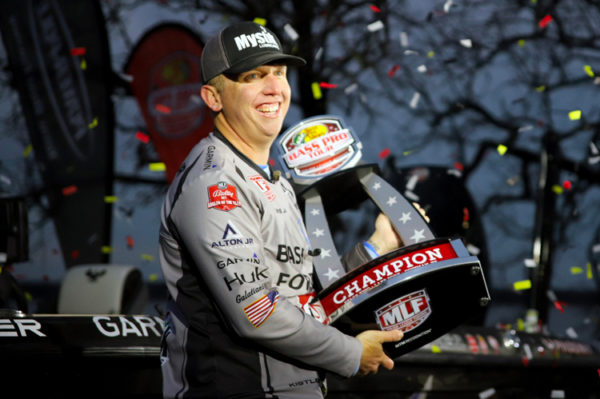 Lake Fork, TX is s known big-bass factory BUT it was almost an Alaskan winter there when the Bass Pro Tour guys showed up. Here’s how Alton Jr got ‘er done for his first tour-level win.

> “I was really excited about the tournament. Being 6′ low, I actually went over there around New Year’s and spent a couple days because I’d never seen Fork that low. What I found was kind of like shooting fish in a barrel. You could see all the timber you could never see before.

> “It was easy to read, creek channel-wise and seeing the key stumps. Because there were key stumps. Normally you’d have to side scan and LiveScope tp find the bigger stumps and root systems. But now you could just look at them and run in there and fish them. So it allowed you to be really efficient.

> “Going into it I knew it would be fairly 1-dimensional in terms of how to approach it. I knew it was going to be all about wood and all about creek channels.”

> “…wanted to throw a 3/4- or 1-oz spinnerbait around. The 5th stump I fished I hooked an 8-lber and I thought it would be the most fun week ever. But it really went downhill from there.

> “I had 7-8 bites in practice – big bites, but it was extremely random. And I was really disappointed because I thought I’d be find big groups of fish but they seemed really scatted.

> “Day 2 of practice I went to some stuff I had history on, and knew it was good…ended up being where I won the tournament. When I got in there I was throwing a spinnerbait around and couldn’t get bit but could see the fish on LiveScope. That’s when I switched gears a little bit, picked up an OG Slim and was able to get some bites.

> “That at least confirmed the fish I was seeing on LiveScope were bass, and I revisited areas I fished the day before…. I was just figuring out a way to get bit and was pretty excited about that flatside bite. I knew a lot of guys would be doing it, but not everybody and not everybody would be LiveScoping shallow.

> “I tried to do the jerkbaiting thing, but looking at weather – every day the wind blew…LiveScoping in the wind with a jerkbait is really difficult.” 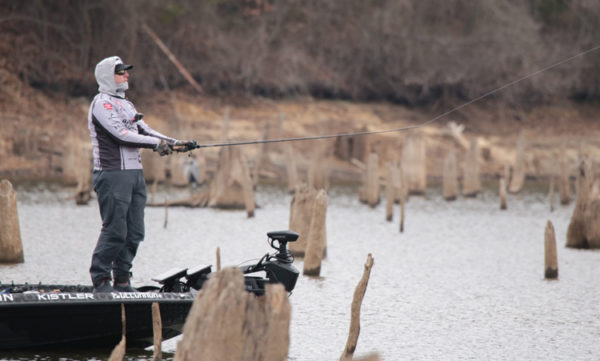 > “Day 1 I started in the back of [Little?] Caney Creek and that ended up being where I won the tournament. I started there because it’s a community hole…thought too many guys would fish it. But the first morning I had it all to myself…shocked. I was super jacked up about that.

> “Fast forward to the end of the 1st period – I had 1 2-lber. But I had maybe 8-10 bites, and they’d hit the flatside so hard they’d knock it around backwards. I had no idea how I wasn’t getting a hook in these fish.

> “I left it and I was kind of bummed out. I went to another area and caught enough to save my day…couple big ones, 1 on a flatside and 1 on a spinnerbait. That put me in a solid position for getting a check, but all in all I was not feeling it.

> “Day 2 I went to the same area where I caught the big ones…grind around and caught enough to where I can go try some different things. I knew I was at the point where I was safe and was gonna advance….

> “…I was throwing a flatside. It’s a great bait and gets bites, but it doesn’t come through the cover all that well. I was getting hung a lot and was missing lots of fish. I got it in my head that the fish were just nipping at it. I was having to reel the bait so slowly and so gently through the cover that they were getting too good of a look at it.

> “One stump that was a little shallower I hadn’t caught a fish on all week. …bites, but never caught one off it. It was shallow enough to where I could get 2.5-series squarebill to it. So I wondered what would happen if I wound it around and banged it off things, trying to get a reaction bite. The water was still in the low 50s.

> “On my first cast I catch a 4-04. I’d fished that stump 10 times in the last 2 days, and the first cast with a squarebill I get that bite. But all the other stumps were too deep for that 2.5 squarebill so I couldn’t get it to the fish. I needed something that would run 5-7′.

> “I called Jordan and was like, ‘Hey buddy, do you have a squarebill that runs deeper?’ He said, ‘How deep is deeper?’ I told him I was throwing a 2.5 and needed something that gets to 5-7′. He said he had one and was kind enough to open his tacklebox and said, ‘Take what you want.’

> “Of course I ended up grabbing one of his custom-painted ones…that bait right there ended up being what I caught every bass on the next 2 days. It was a Berkley Squarebull – it’s a little longer than the typical squarebill, and if you look at the end of it it has like a flat spot on the head…looks like a continuation of the bill. I thought there’s no way it will get to 6′ but it did.

> “It started out pretty fast that next morning. Something about that bait – they just gobbled it. The whole Knockout Round I had to get the pliers out. It’s great when they come up and jump, and you can’t even see the bait.

> “I went back to [Little?] Caney Creek…most bites I had in any one area even if didn’t catch ’em. I pulled in there [the final day] and there’s some other anglers in there from another group. But with the combination of that bait and being really dialed with LiveScope, I was able to fish behind guys. One guy caught 1, one guy caught 2 and I had 12 for 52 lbs.

> Custom-painted Berkley Squarebull: “[Color] wasn’t much different than any other red crankbait except it had almost a tint of yellow-orange.”

> 7′ 2″ MH Kistler Alton Jones Jr signature series Reaction Rod, available around ICAST (July). “It’s in the Feel N Reel Series. It has a normal composite base with a lot of backbone, but the top 18-20″ of the rod is fiberglass. So it has the backbone of a normal rod with a soft tip.” 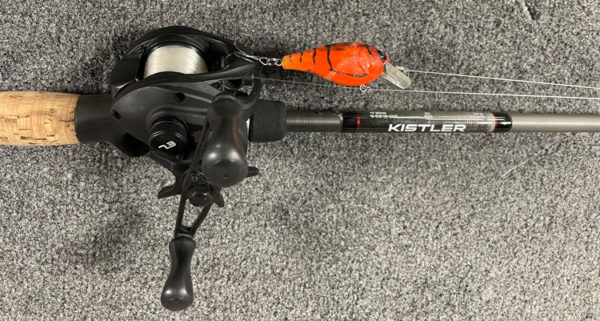 > Shout-out: “Huge shout-out to Bass Forecast, the app. We had a wild weather week, and being able to look at Bass Forecast a week in advance and seeing how the weather was going to affect these fish just helps you keep an open mind. It’s just another piece of info you can add to the puzzle.”