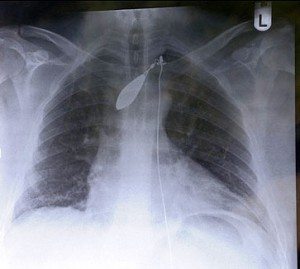 Is this why Mike did it?

As everyone knows by now, SoCal fisherman Mike Hart stuffed lead weights down bass’ throats to win (temporarily) the WON Bass US Open â€“ and, according to various news reports, may have done so at other tourneys. Come on there, Mike! That’s soooooo 20th Century. Everyone knows by now that tungsten beats lead hands down. Let’s go over the differences:

1. Lead is toxic, man! The bass probably tipped the tourney officials off â€“ swimming upside down, getting easy math problems wrong, licking the livewell, saying the alphabet out of order, etc. This would not have been a problem with tungsten. Hold on â€“ I just read that tungsten is more dense…hmmm.

2. Lead is bigger. Say you swallowed one of those balloons used to make balloon animals, full of sand. Are you going to want to hork it up? You bet. But what if it was one of those water balloon-sized balloons that mules from South America smuggle drugs into the US with. They do okay, right? Okay, maybe not, but you get the point: Smaller weights and maybe the bass wouldn’t have puked them out.

3. Tungsten is harder, so it must be “harder” to detect, right?

4. Tungsten can be plated and colored. So you could’ve made the weights look like hellgrammites, tadpoles, Funyuns or whatever, just not lead weights.

All you cheaters out there make sure you keep this in mind on your next law- and rule-skirting adventures.

This is where the Blaster Headlines/Subject line would go
Rapala’s in the Beer Biz!