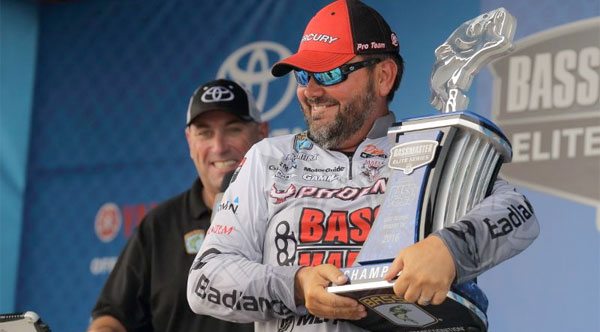 The Hack Attack cracked ’em every day during tough conditions on Lake Texoma last week. First the water rose, then it fell. The weather was sunny and calm, then it was cloudy and blew. But Hack got on a pattern that was pretty much impervious to it all. Here’s what he did.

> “I started to dial it in mid-day the first day of practice. I started off running the shad spawn the first day. There was a huge [shad] spawn there [at Texoma], but I couldn’t catch anything around it.

> “So then I started running the typical summertime bushes, but the fish were not moving shallow. They wanted to be on the outside edge.

> “I really got on the deal the second [practice] day, when I figured out it was ditch-oriented. It was all about a creek channel or a drain.

> “If I caught one off a point, it would be where a creek channel or the river swung on the point. And a lot of big pockets had a drain down the center of them. The fish were relating to those drains.

> “Bushes were everywhere, but the more I fished, the more I figured out that wasn’t the deal. It was the bottom. Where the drain would turn it was steep â€“ the break was steep, and they were around that steep break. [Bushes and willows were there too.]

> “On places like that when the water gets real high, that’s the time of year when they’re not wanting to go shallow. They just go straight up. So they’re sitting where they were when the water was normal…they seemed to come straight up with the water and suspend. Every fish I caught was suspended â€“ I never caught one on the bottom. They were 1-4′ at under the surface in 8-11′ of water.

> “It’s a really uncommon deal. We don’t fish many places like that anymore. I grew up around the lower end of the Mississippi River and that happens yearly: When the water fluctuates [up big], a lot of times they just go up and down rather than out.”

> “Any point with a ditch, but the main lake points only had spotted bass. I never caught a key largemouth off them…caught some good spots I ended up weighing in.

> “[Also could be an] underwater point where things would make a turn, or an intersection where two drains came together to make kind of a point between the two.

> “The bites were random because the fish weren’t on all the key stuff I fished. But there had to be shad. My livewells were full of shad every day. They were gorging on shad.”

Here’s the actual baits he used: 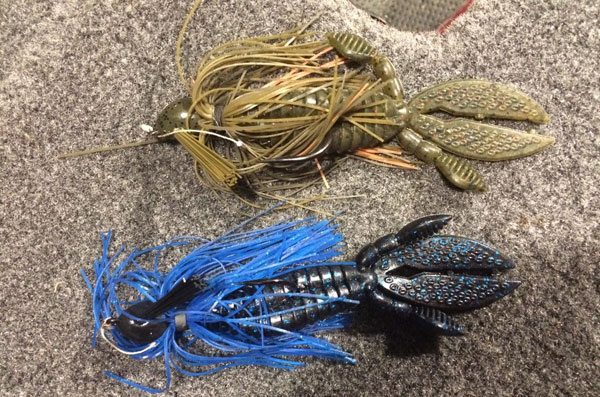 Every fish he caught came on a Strike King Hack Attack Heavy Cover Jig with a Strike King Rodent trailer in two color combos: Alabama craw jig/double header trailer, and solid blue jig/blue bug trailer. He estimated he weighed 15 on the gp jig, and 5 on the blue.

> “Color-wise I experimented with several different colors, and that Alabama craw would outproduce everything. The water color was textbook for it. It blends in â€“ it’s real natural-looking in the water. I put the double header [color] on it and it looked real.

> “I do that with jigs, crankbaits, whatever. I pull it through the water and if it looks real, you will get bit on it. I don’t like to fish anything that stands out. I think I’m more apt to get bit on something that looks natural.

> “I experimented with white some, and got some bites on it, but they just kept biting that natural color so I stayed with it. The blue jig I always like around shad, but it’s an early-morning deal so as soon as it got light I didn’t fish it.

> “The whole deal with the [Strike King] Rodent [instead of a craw-type trailer] is I wanted it to [fall] real fast…get a reaction bite. That’s why I didn’t use a Rage Craw.

> “That 1-oz jig was the key, and putting that Rodent on there made it fall like it was 1.5-oz because there was no drag on that trailer.

> “[His key spots] did not replenish. You could not go back to the same place and catch another one. The third day I didn’t catch them as well because I went to the same places I caught 20 lbs on the second day and they weren’t there.

> “If there was a large bush or tree of course I’d fish around it, but it was only 1 flip per spot. I had to get it right on their head.

> “I knew how long it took to get to the bottom. If it ever fell an instant too long, I swung. Sometimes you wouldn’t feel [the strike].

> “When the water was falling, they weren’t as aggressive. When [the water] was creeping up, they were aggressive.”