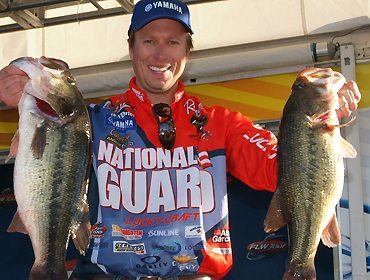 I'd put this guy up against anyone, any time. Yes, that includes KVD.

You’re probably familiar with Rob Newell’s work. And if you’re not, you should be. Rob’s one of the busiest journalists in the outdoors industry and I’ve always dug his stuff.

The best compliment I can give Rob is that he pays attention. He’s always on the lookout for those little habits and routines that tour pros have that makes them so much better at catching bass than you and me.

Rob’s latest article, a long one featured here at FLWOutdoors.com, is an in-depth look at some of FLW’s top guns like Bryan Thrift, Andy Montgomery, Mark Rose and Brent Ehrler.

“Even without bites, (Thrift and Montgomery) assess the water based on looks, color, clarity and ‘what should have bit.’ They are hunting what Thrift calls ‘high-percentage water,’ the rare two to 10 percent of the water that holds quality bass compared to the other 90 percent that does not.”

On Montgomery’s knowledge of the shad spawn:

“I once asked Montgomery if he was on a ‘shad spawn’ pattern, and he replied, ‘Well, not really. The shad spawn is over; it actually is more of a â€˜shad fryâ€™ pattern.'”

“During practice, bedding and cruising bass were eating sinking lures â€“ shaky heads and small jigs. But at some point during the tournament, that bite started to wane, Ehrler picked up a weightless wacky rig and instantly got bit. It did not take him long to realize the fish had quit hitting bottom baits and were now ‘looking up’ in the water column to eat.”

As usual, good stuff from Newell. Make sure you check out the full piece.

Reading this article reminded me of another one of my favorite Newell entries on Virginia pro David Dudley. Here’s the excerpt I always remember from that one:

“But what shocked me more than the oil shortage was when Dudley picked up an old spinning rod and two of the ceramic inserts that go in the rod guides popped out. With every cast he made, the ceramic inserts would ride the line and clatter together, yet he kept on fishing as if nothing were wrong.

“I figured the first hook set he made would break the light line without the critical ring inserts in the rod guides. After he boated several keepers on the ancient spinning rod, I suddenly realized that in my lifetime I had spentÂ way too much time worrying about insignificant details in fishing.”

You can read the full Dudley piece, here.

How To Make Your Kid Afraid to Wade
Biologist: Griz Country Run Bad Idea
To Top
We use cookies to ensure that we give you the best experience on our website. If you continue to use this site we will assume that you are happy with it. Cookie settingsACCEPT
Privacy & Cookies Policy