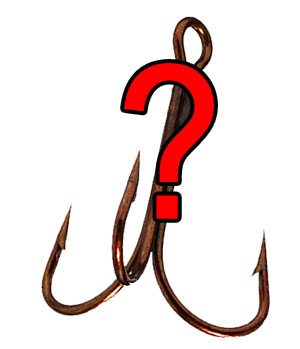 Being the hardcore bassheads we are, sometimes its easy to forget that, for the most part, the general population of non-anglers really doesn’t have a clue what the sport of bass fishing actually entails. Look no further than this post on FoxNews.com for proof of this fact.

First of all, we don’t fish in “contests”, we fish tournaments. And check out this doozie of an attempt at describing what a treble hook is: “Robert Matsuura said his teammate Peter Leeâ€™s treble hook lure, which was comprised of three hooks connected to three smaller hooks, struck him in the head.”

Three hooks connected to three smaller hooks? Huh? I think Fox News just accidentally invented the sextuple hook. And for the record, I have no idea what the #^&! a “treble hook lure” is, either.

If you can get past all the gobbledygook about contests and sextuple hooks you’ll discover that Lee, one half of the recently crowned FLW College Fishing Western Regional championship team, errantly delivered a wad of trebles upside Matsuura’s head during the derby at California’s Folsom Lake. Ouch.

And, of course, Matsuura did what any self-respecting tournament stick would do: he cut the hooks off, leaving two bends of the treble stuck in his dome. Then he and teammate Lee fished fished the rest of the day on their way to bagging the Western Regional title and $50,000 for Sacramento State University.

Well done, fellas. And watch out for those pesky treble hook lures. They can be nasty.

Click here for a more informed version of the story.