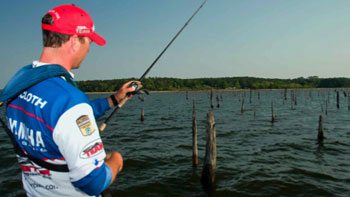 I don’t fish lakes with flooded timber. But if I did launch my bassin’ canoe on one, I’d make a beeline for that rotten wood and start dropping, or maybe cranking.

I guess that’s why I’m not an Elite Series pro. Here’s what Tood Faircloth says about it, via the good folks at Yamaha.
_____

The first lesson Todd Faircloth learned about bass fishing in lakes filled with flooded timber was not to fish the individual trees. Itâ€™s a lesson he admits was hard to accept, especially growing up near tree-filled Toledo Bend. But it has since served him
well.

â€œNo matter where youâ€™re fishing, and as inviting as acres and acres of trees in the water may look [mmmmmmm…donuts…..], donâ€™t use your time trying to retrieve your lures by as many of those trees as possible,” he said. “Very seldom will you catch many bass that way, unless you just happen to stumble into them.

“Instead, concentrate on the bottom structure, such as channels, points or high spots, and use the timber to tell you clues about that bottom structure.â€ Leaning timber, for instance, frequently outlines the edge of a channel. A clump of trees taller than the
surrounding timber may indicate a ridge or high spot. And a well-defined open route through the timber could mean a roadbed.

“Bass will use these features regularly. Theyâ€™ll migrate down a roadway or gather on a high spot to feed, and you fish them just like you would if the trees were not even there.

“Many times, the bottom contour or the composition changes along that edge, so while Iâ€™m fishing Iâ€™m also studying my depthfinder carefully. Iâ€™ve located schools of bass concentrated right at the point of a treeline, just like Iâ€™ve found them on a regular point
in a lake, but theyâ€™re not concentrated there because of the trees.â€

Only occasionally does Faircloth make an exception, and actually aim a few casts to specific trees in the midst of a flooded forest. This is when heâ€™s trying to identify what he describes as â€˜patterns within patterns,â€™ and one of his favorites is finding isolated trees or small clumps of trees located away from the main timber.

He used a pattern like this to win the 2008 Elite Series tournament at Lake Amistad.

â€œI also like to look for larger trees when Iâ€™m idling along the edge of flooded timber,â€ Faircloth continues, â€œbecause the bigger trunks are generally hardwoods. And while they usually grow in low areas, they have more branches and limbs than the pines,
which tend to grow on the higher places.”

When he is fishing particular trees like this, Faircloth is also looking for baitfish. Their presence nearly always means bass are nearby. And if he sees them on his depthfinder, he can often determine the depth of water the bass themselves are using, and choose his lures accordingly.

If he doesnâ€™t see baitfish, he wonâ€™t spend much time in the area.

His favorite lures for fishing lakes filled with standing timber are crankbaits, jigs and plastic worms.

He especially likes to throw shallow-running squarebill crankbaits along the outside edges, where he can bounce it off trunks and stumps.

Jigs and worms are better-suited for pitching to individual trees â€“ if heâ€™s been able to identify the depth, a particular bottom feature or a certain type of tree bass may be using.

â€œFlooded timber is hard for most bass fishermen to ignore because it always looks so good,â€ Faircloth said. â€œEven after all these years, I still have to resist the urge to throw a spinnerbait or topwater out in the middle of an acre of standing trees.

“I now try to visualize the bottom first, both by what I see in the trees themselves as well as with my depthfinder. And thatâ€™s what I concentrate on.”