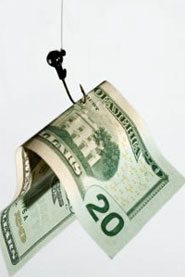 In Ann Arbor, MI the police caught a guy who was trying to steal money from a bank by using a hook and line. Uh, yep.

A short summary of this work o’ genius, from here:

A 26-year-old Ypsilanti man was arrested this morning after Ann Arbor police responded to an alarm at a South State Street bank and found him hiding near a night deposit box that had fishing line hanging out of it, police said.

The alarm call from Michigan Commerce Bank came in at 4:16 a.m., and officers were on the scene within three minutes….

…it appeared he was trying to get money out of the night deposit box using the fishing line.

> Reported back in May: “Ann Arbor police are investigating after a fishing line and hook were found in a night deposit box at a bank….”

> And this doozy: “It’s unclear whether the incident is linked to several similar incidents in recent months….” You mean other wanna-be criminals also had this idea? Apparently yes! In South Carolina.