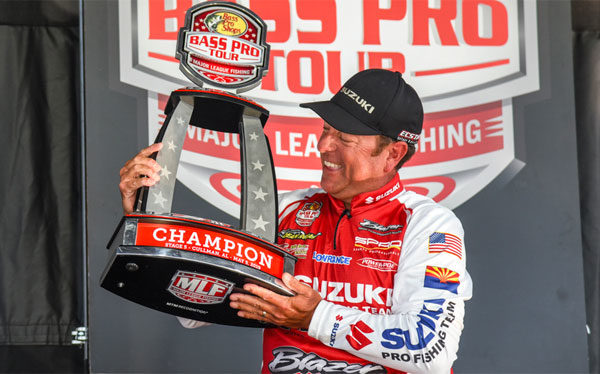 You might think a shad spawn would make Dean Rojas — a 100% certified froggin’ sensei — drool so bad he’d be fillin’ up the boat. Turns out Dean hasn’t drooled for a couple months now (hahaha!)…anyhow FIGGERatively speakin’ you’d be right. But he didn’t just fish on top. Here’s what went down.

Thumbnail of how he fished

> “[Pre-tournament] I felt like I’d found some fish and could be competitive, and the shad spawn was a big deal. I knew if I could get to where I ended up fishing the first day, I’d have a chance to put some fish on the board and some good ones….

> “…Shotgun Round…then it all dried up in the Elimination Round…my secondary pattern carried me through that and the Sudden Death Round….

> “…area ended up fishing [the last day] I found in practice. I checked it every morning. [The last day] I went in there and sat there…see what’s happening. Saw a few fish busting, and thought, Well I’ll start right here. Then all of a sudden it was on.”

> “The shad spawn in the morning was critical if you could find it. The guys…caught them really good first thing in the morning. To be able to catch them that quick like that, you have to be around a lot of them.

> “When everything settled down [from the shad spawn nuttiness], the bass were still hanging around the brush so I could flip them the tube.

> “The frog was actually our [SPRO] Spit Shad model (killer gill)…all the colors in that [bait] are all baitfish so I didn’t throw traditional frog colors. Killer gill…I have a lot of confidence in that color and the bottom of that particular bait is silver. In my experience that color really shines when they’re feeding on baitfish like that, around bushes and trees.

> “The bait is like a hybrid between our poppin frog and the Bronzeye…but it doesn’t chug, it spits. I wanted that kind of sound….”

> “Whenever they stopped blowing or weren’t really feeding but were still in the cover itself, I flipped a 4” Big Bite Tube (smoke sparkle) with a 3/8-oz Epic Tungsten weight, 4/0 Gamakatsu EWG Superline Hook, 20-lb Sunline Sniper, Duckett 360R Reel (7:1) and a 7′ 6″ H Duckett Black Ice Rod.

> “The tube emulates shad — it has a distinct action to it. It darts in different directions. They weren’t feeding on crawdads so I wanted that erratic action coming in and out of the cover which draws the strikes.

> “Tubes are old-school, but in this circumstance it was critical. The bait slid through cover effortlessly and the action made them eat it.” 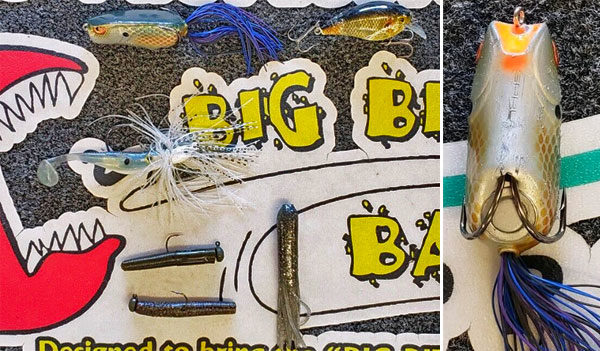 > “I was throwing a Ned Rig-style bait and fishing it deeper, anywhere from 9-25’…dropoffs, secondary points and main lake points that had shoals that came out where the fish could move up and down on. I threw up on top of and worked it on the edge of the drop….

> “…the original Ned Rig bait, switched up with a Big Bite Trick Stick I cut in half. I used 2 different colors: gp/purple flake and was a shad pattern, half silver/half grey.”

> “When I saw them suspended, I’d throw a little 4” Big Bite Finesse Swimmer on a 3/8-oz Gamakatsu bullet head jig with a 2/0 hook in it. I’d make casts with that over the points, over deeper water when they were suspended.”

> “The final round I ended up catching a lot of fish on a squarebill…cross between a shad pattern and golden shiner…dull finish. With the cloud cover and low light I think that color was good.

> “It’s just all location — spotted bass keep moving, almost like smallmouth. So if they’re not there, you have to keep moving. I would revisit [spots] throughout the day.

> “I learned a lot at the Chick event. I led and then backed off and shouldn’t have — I learned important lessons there. It carried over in this event where I just caught everything I could. Every round was just catch as many fish as I possibly could.

> “…able to win at this particular format, along with the previous format, is very rewarding…competing against this group of fishermen, at the highest level of pro angling, and coming out at the top.”