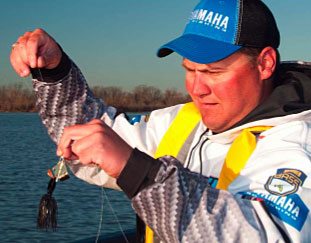 Do you tie on a 1/2-oz black buzzbait in the dead of summer, the daytime, and sizzle it back to the boat? Me neither, but Elite pro Cliff Crochet does. Here’s more, some excellent info from the fine folks at Yamaha:

> During the hot summer months when Cliff Crochet fishes buzzbaits, his favorite color
is black and the only retrieve speeds he uses are fast and faster.

> â€œItâ€™s all about confidence,â€ he says, â€œespecially the black color, but to me buzzbaits are strictly reaction-strike baits…. Speed generates those reaction strikes, and when a bass hits, it isnâ€™t looking at lure color at all.”

> â€œThe first buzzbaits I used when I was young had black skirts and black blades, which are normally colors you fish at night, but they were all I had so I fished them during the day too. When I caught bass with them, I just kept using them.â€

> “When Iâ€™m looking for a larger fish to help fill out a tournament dayâ€™s catch, I donâ€™t hesitate to start racing a buzzbait across the surface.â€

> Although buzzbaits are manufactured in several sizes, Crochet nearly always fishes 1/2-oz baits because they tend to attract heavier bass [and can be cast farther].

> He likes making long casts and retrieving over submerged vegetation as well as around stumps, rocks, and boat docks. Rarely does he fish water deeper than about 5′, and if he has a choice, he wants a light breeze.

> “Certainly, one of the advantages of using a buzzbait is the amount of water you can cover just by making a long cast. I can actually hit two or possibly three different targets on the same retrieve.â€

> On Crochetâ€™s initial cast and retrieve to visible targets, he does not try to actually hit the cover with his lure. Instead, he reels the buzzbait a foot or two away from the target, in hopes he might get an â€œeasyâ€ fish to bite. If itâ€™s a big bass, it will be easier to play since itâ€™s already away from the cover.

> â€œIf I donâ€™t get a strike on that first cast, I’ll run the buzzbait straight into the target, the very same way we run crankbaits into the cover. It changes the lureâ€™s appearance instantly, and sometimes that change in sound and speed will trigger a reflex strike.â€

> Crochet emphasizes that one of the most common mistakes he sees other buzzbait fishermen make is improper rod position while retrieving. Pointing the rod tip down at the lure almost guarantees losing a bass when it strikes, since the rod canâ€™t flex. Instead, the Yamaha Pro suggests holding the rod tip slightly up at about the 2:00 position.

> â€œAt this angle, you still have excellent lure control, and when a bass does hit, your rod will flex to allow the fish time to really take the bait. If youâ€™re using braided line, which I always recommend, all you need to do is make a short, quick jerk upward, and youâ€™ll hook the fish.”