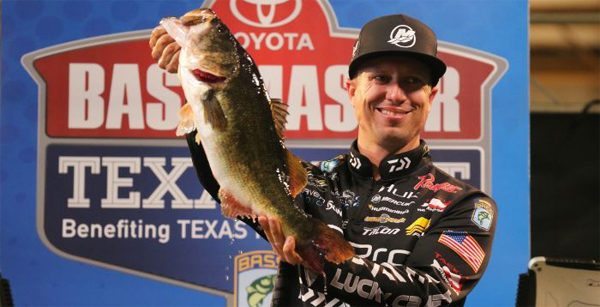 Unlike the last time Brent finished 2nd, this time he was cool with it. “I didn’t have the opportunities to win this one. I didn’t lose any big fish, and with the style of fishing I was doing I was happy to catch what I caught every day. It was fun catching a ton of fish. No regrets really.”

> “The first morning of practice I went out looking deep and fished deep until 9:30 trying to find the fish. I believed it would be won out [deep]. At 9:30 I was like, Man, I need to run up to a bank and see what it looks like. Within 30 minutes I had 12-14 lbs on topwater. So many of them were up shallow.

> “Day 2 I fished shallow and deep both again — I still believed it would be won out. But I didn’t find anything out there. So my gameplan was set shallow.

> “I was planning on throwing a topwater and a vibe jig, and a jerkbait a little bit.”

> “The first day of the tournament I started with a topwater and vibe jig, then picked up a jerkbait and caught a 9-lber that ended up being a Tundra fish [won a truck]. So I shied off the topwater the rest of the tournament, and just fished the vibe jig and the jerkbait days 2-4.

> “It was a pretty steady cadence. I was just snapping it — nothing tricky. I was fishing it around hydrilla edges in 5-8′. I was really keying on 2 points, and the backs of drains and pockets. Fish were keying on that outside edge more than anything. They were post-spawn, staying there because the cover was still there.

> He got on that jerkbait “because of John Murray. When we were at T-Bend, John said they really bit that Slender 127. I had one of them with me, but I had a giant Plano box of them at home. So when I went home, I dug through my garage and brought that box out for this one. It had dust on the top because I hand’t used it in a long time. I’m kicking myself right now — it should’ve been in my boat the last couple years.”

> What’s so good about it: “I think the size was key as well as the weight transfer. Weight transfer gives it and up-and-down darting action along with the side-to-side.” 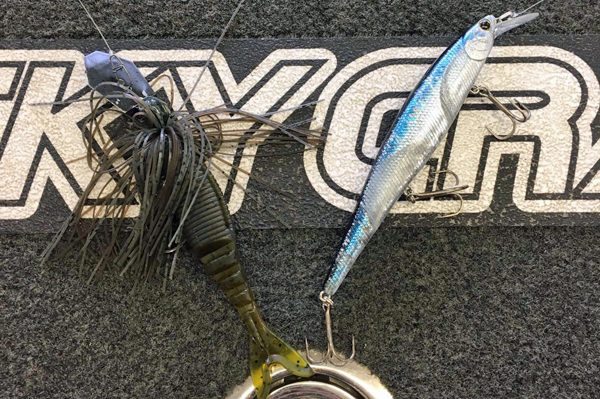 > He fished the vibrating jig “in the same areas, but shallower stuff. When the hydrilla was sparse and there wasn’t a good hard edge, I threw vibe jig.

> “One thing that was kind of weird was they’d bite either the jig or the jerkbait. If I wasn’t getting bit for a while, I’d pick up the other one and within 2-3 casts I’d get a bite. I’m not sure why that was.”

> “Secondary points and drains were the biggest deal. It was more random in practice, but as it progressed, with so many guys fishing it pushed those fish around…put them in those 2 areas more than when I first got there.”

How the VanDams caught ’em at Ross Barnett
Brandon Palaniuk’s winning Rayburn baits
To Top
We use cookies to ensure that we give you the best experience on our website. If you continue to use this site we will assume that you are happy with it. Cookie settingsACCEPT
Privacy & Cookies Policy