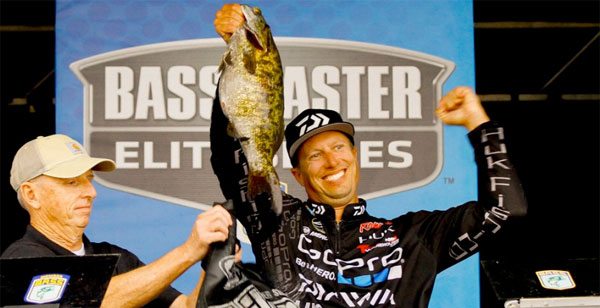 “I feel like a won a tournament,” Brent said after finishing 2nd at the Mille Lacs Bassmaster AOY tournament. “It’s been a trying year for me — it’s been really weird. In 7 of the 9 regular-season events, I’ve had one good day and one bad day. It’s been a terrible season for me — for what I put on myself, what I feel like I should do.

“I was out of the Classic after a complete bomb at La Crosse [upper Mississippi River], so I had to do well at this tournament to make the Classic. I set a goal and achieved it, so it feels pretty good.”

> “I didn’t grow up fishing smallmouths but I’m comfortable fishing a dropshot and fishing deeper. But this was different than I thought. I thought I’d be fishing in 30′, but the deepest part of the lake was 30′ — so I looked at stuff in the 25′ range. The first day of practice I only caught one bass all day. I didn’t find any out there [deep].

> “The second practice day I did well, and the third I did terrible. I didn’t know what to do. But not having a lot of areas to run to made me hunker down in very few areas.

> “Side-scan was a big help. To me it seemed like a good percentage of that lake was flat, so if you found steeper breaks they seemed to be better.

> “A lot of rock is down there — chunk rock, baseball-size rock, gravel and boulders the size of half a boat. If you could find an area that had some of that flat and some big boulders it was good.

> “Some areas had a lot of rock, but too much was bad. If you found a single boulder, you’d catch one on the first drop every time.

> “The third day at my primary spot I caught 1 right off the bat, but by 11:30 I only had 3 and 2 were just keepers. I pulled the trolling motor [to make a run but] looked around for just a second. I did a couple zig-zags with the side scan…happened to find two boulders…

He caught more than a limit on those boulders including this, the biggest fish of the tournament, a 6-10:

> “For colors I used green shiner, new ayu and watermelon magic — natural greens were the better ones, but I didn’t feel like it was too color-specific.

> “I’d shake it. I caught a lot on the drop when I saw them. I’d make a cast to them, constantly shaking it.

> “Sometimes it would take a long time for them to bite it. I’d drop on them and leave it there. It was weird. Normally if you drop to them and shake it, they’ll bite it right away. But you needed to convince them.”

> “I have the new Minn Kota Ultrex trolling motor and am completely blown away with that thing. Honestly, if you don’t have one of those motors you’re at a disadvantage without a doubt. With that motor and the Spot Lock capability, I could sit there in 3-4 footers, never touch the trolling motor and it would hold me exactly where I wanted to be. It’s ridiculous. I was blown away. It’s a complete game-changer.”

How Ott DeFoe won the upper Mississippi River Elite
How Seth Feider won the Mille Lacs AOY derby
To Top
We use cookies to ensure that we give you the best experience on our website. If you continue to use this site we will assume that you are happy with it. Cookie settingsACCEPT
Privacy & Cookies Policy