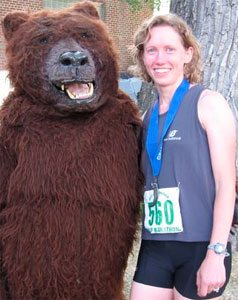 In the current era of flip-flop-wearing, cell-phone-toting “hikers” being helicopter-rescued entirely too often, maybe it’s no surprise that some geniuses want to hold a running race bang smack in the heart of grizzly country Montana. But at least one guy has some common sense.

> Chris Servheen, the grizzly bear recovery coordinator for the U.S. Fish and Wildlife Service, said last week the race â€“ a 100-mile foot race in the Swan Range â€“ is a bad idea.

> Running on trails in grizzly bear habitat is not recommended because people are more apt to run into bears [duh!]. For one, most runners are quiet, Servheen noted, and when hiking in bear country, travelers are encouraged to make noise so bears know a person is approaching. Secondly, with an ultramarathon, runners are moving at dawn, dusk and at dark just to finish the race. Bears are most active at dawn and dusk. Meanwhile, a runnerâ€™s visibility is poor.

> He likened it to skateboarding in the Sistine Chapel. Yes, someone could do it. But itâ€™s still a bad idea. â€œItâ€™s human arrogance about human behavior in natural systems,â€ he said.

> In Glacier National Park, a runner was bitten a few years ago after he encountered two young grizzlies in the Park. Another runner in Glacier prior to that had a grizzly bear bite off his shoe [close call!].

Tripped over the following in the course of this post â€“ gruesome, written by a guy who lived in Alaska:

> “I had been told by the local Indians that to be killed by a bear is one of the worst possible ways to go. Bears don’t kill people quicklyÂ â€“Â they are too powerful to be concerned about us getting away.Â They simply pin you down, like a cat with a mouse, and start to eat. They favor the soft tissue around the lower legs and buttocks, which they rip at with gusto. They are oblivious to your screams.”

> Apparently that Grizzly Man movie guy, who tried to make friends with bears, took over an hour to die while being eaten. Yikes.