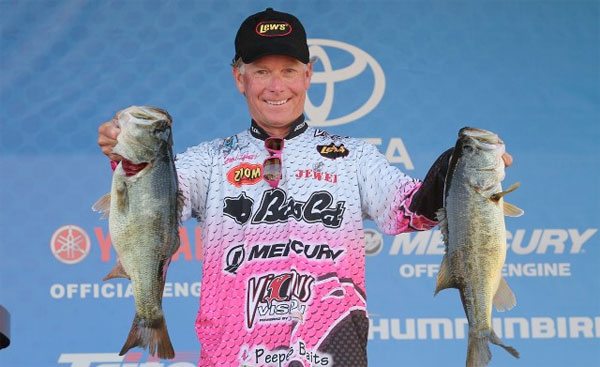 Quite possibly one of the most asked questions to any tour-level bassin’ pro is, “How much does it cost to be a pro basser?”

First, thatâ€™s a loaded question as Iâ€™m not sure we can truly define who or what a “professional bass angler” is. Many years ago the Bass Boss, Ray Scott, defined a professional angler as anyone who had the entry fee for the next event. Forty some-odd years later, that definition still holds a lot of water.

We have no league or organization that hands out Official Tour Cards to those who pass qualification exams or meet basic standards. It pretty much stands that if you have the cash and time, you can join the party. So how much dinero does it take? Letâ€™s break it down.

What follows is a fair estimation of what itâ€™s taken the past 2 years in expenses to play on the Elite Series. These expenses are bare bones â€“ no five-star accommodations, no steak every night for dinner, no-frills living. PB&J. White bread. Bologna. Spam. Cheese crackers. You get the picture. 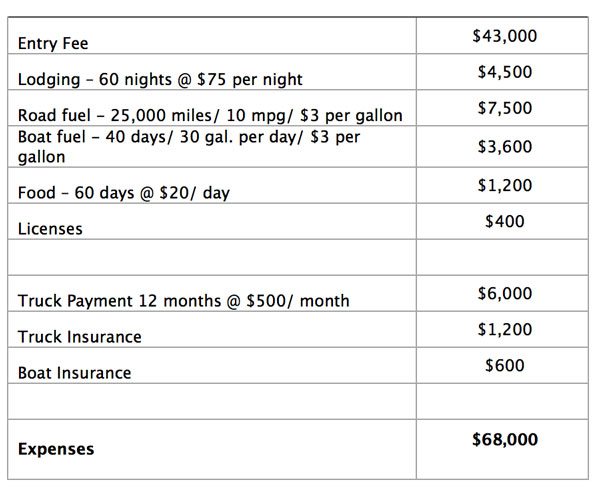 As I said, these are living pretty basic. No tackle is included and thereâ€™s no way youâ€™re going to make it through the season without having to purchase some tackle.

Contrary to popular belief, the heavens do not open up above your house when you make the Elite Series and rain mountains of free stuff down into your garage. It just doesnâ€™t freaking happen. Call the guys at Tackle Warehouse and ask them how many shipments they make to K-Pink in a year. Itâ€™s a big number, and they charge my Visa card every single time.

A boat expense isnâ€™t shown either ,and thatâ€™s a pretty big one. It can vary greatly, depending on how established you are and what kind of arrangement you can make with a manufacturer or local dealer.

Chances are high that you will have to pay SOMETHING for a boat. Again, just not one of those things that falls from the sky for ANY Elite pro.

I know what youâ€™re thinking: “My buddy has a buddy who has a cousin that lives next door to a guy who knows Billy Bob Basser and he gets 12 free boats every year.” Whatever. Billy Bob doesnâ€™t get a “free” boat, much less 12 of them.

IF heâ€™s one of the top 10 guys in the national standings on a consistent basis, he might â€“ MIGHT â€“ get a boat as part of his compensation package. But heâ€™ll work for it AND get a 1099 at the end of the year showing it as income.

Everyone else buys a boat. Period.

So if we agree that $68K figure is pretty solid as a minimum for what it has taken to play at the Elite level the past two seasons, here’s where you would need to finish on the accumulated money list just to cover your expenses. 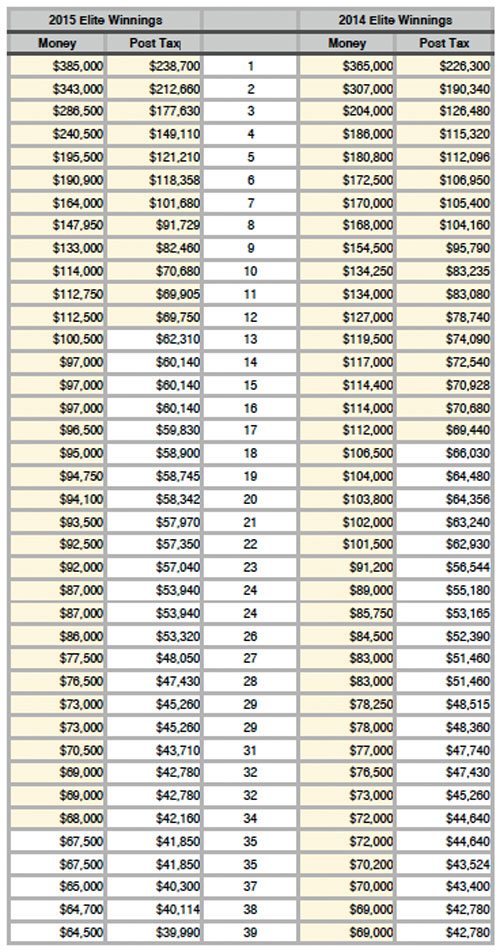 Two columns highlighted here: one for pre-tax, and one for post-tax. Taxes are figured as if you’re running an S-Corp, which is the absolute cheapest: 28% for federal, 10% for state, and 0 for FICA. If youâ€™re playing the game correctly, youâ€™re basically self-employed and are expected to pay federal and state taxes on the income (winnings) that you generate.

Money from sponsors is also included as income and weâ€™ll go into that later. For this discussion, weâ€™re just focusing on winnings and expenses to see where everything shakes out.

(If you skip out on paying taxes on your winnings, I can promise you that the revenuers will show up and you will not like what they have to say. And it’s a lot easier to make the monthly or quarterly payments than make a big one at the end of the year when it becomes an uh-oh moment.)

Thatâ€™s right, even pre-tax you had to be in the Top 40 in either year just to cover your expenses. The 68 or 62 anglers, depending on which year, below that mark lost money.

And you still havenâ€™t paid for your boat, your mortgage, your groceries, your cable bill, your cell phone, your kidâ€™s shoes, your health insurance, your 401K, or any of the things that it takes to run a household. All youâ€™ve done is (barely) cover the expenses for your fishing job.

Again, we havenâ€™t thrown sponsor dollars into the mix. Yet. I promise you we will at a later date.

So K-Pink, how do these guys make it, you might ask. Just like any other job, it takes a lot of work. Those who are truly the most successful are typically those who put the most into it.

Some guys married trust-fund wives. Some were financially self-sufficient before they began playing the game, whether through their own hand or a benevolent family member. Some I have absolutely no idea how they make it from one year to the next.

Soon weâ€™ll jump off into that pool and see what we find.

What it is
The class system