Aaron Martens won by fishing where no one else was fishing. Sorta. He was n’t really fishing around anyone, but more than that it seems like he was keying on a specific depth that most Elitists missed. Deets:

How and where he got on ’em

> “I fished deep and shallow in practice, but the majority of the time I was in 20-30′. I caught a lot of good fish in practice but I had a feeling [shallow] wasn’t going to be the deal. Up shallow I found some really good ones, but it was where a lot of guys were fishing and it got pressured….

> “It was all hard bottom and rock. It had a lot of grass. …in 20′ was on the edge of the grass…a little grass mixed in. I moved up [shallower] into the thicker grass….

> “I fished one flat [in the “inland sea” area]. I didn’t really have to move — enough fish were in that area. You’d catch a couple here, one there — you had to move around a lot.

> “Every type of grass in the lake was in that area. In some areas it was 18” tall [from the bottom], some areas it was more sparse, then it was clumpy in some areas. I was hitting all those clumps. If you found them, you could catch more than 1 out of a clump.

> “I pitched around to different stuff. Some places you’d catch 1, some spots I caught 4 fish.

> “They wouldn’t swim very far to get your bait.”

How and why he dropshotted 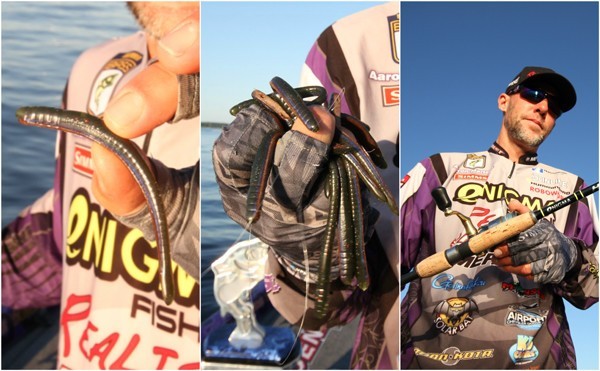 > New hook: “I can’t say enough about that hook. Honestly, there’s no hook better for TX-rigging a bait.”

> New Sunline braid: “The process…makes the braid really smooth. It’s a little stiff when you first throw it, but it softens up pretty quick. I’ve had the same braid on this whole season, caught a ton of fish on it and it’s still dark. It hasn’t faded… But the smoothness is what I really like.

> 20” leader: “There was lots of grass so I used a longer leader to keep the bait more visible in the grass….

> Why the bait color: “It’s like a transparent green with blue in it and brown on the bottom…[transparency] gave it a little bit of a glow in that water color. I saw a lot of baitfish that were dark like that…that worm had the same hue.

> “Those Helix graphs are pretty dang awesome. I had 4 graphs…a map on one…sidescan for the rock and hard bottom…and sonar [to mark fish] on the same graph.”

> Said it was too shallow and too grassy to video-game fish. 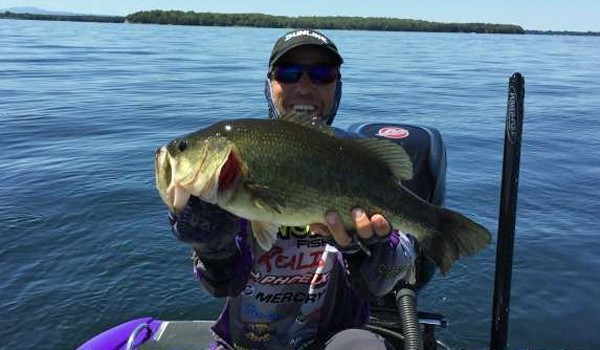 > “I knew I had over 20 before that, and I knew I needed a 6-lber to have a chance to win. [After catching it] I knew had a chance at that point. But I was trying to get another big one, believe me.

> He weighed 8 largemouths (all dropshotting) and 7 smallmouths.