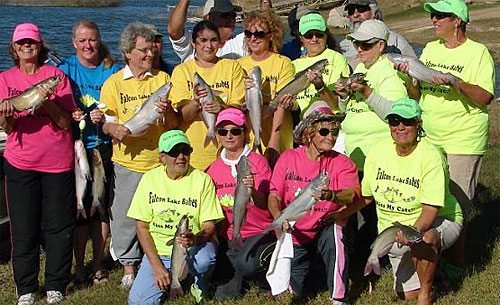 Here are the Babes! (tackleandrods.com photo)

What happens when people get shot on a lake? Lots of people stop going, which apparently is what’s happened at Falcon in Texas.

What’s the solution? Showing folks how safe it is, which is what a bunch of ladies called the Falcon Lake Babes are doing via a ladies-only catfish derby. From the local Monitor newspaper:

> Tired of the bad rap their lake has gotten in recent months, a group of Zapata women are fighting back.

> The tournament, organized in November, set up four rounds of competition plus a championship. They have held three so far, awarding hundreds of dollars in prize money for the biggest catfish caught, and organizers hope enthusiasm for the competition will provide a boost to Zapata.

> The small, tourism-driven community has been ailing ever since jet-skier David Hartley was reportedly gunned down by Mexican â€œpiratesâ€ on Falcon Lake in September. The incident received nationwide attention.

> â€œWe did this because weâ€™ve had so much negative exposure,â€ organizer Dee Dee Fox said. â€œOur economy has been hurt, really hurt. â€œI think itâ€™s working because more fishermen are starting to come back.â€

> â€œIt couldnâ€™t hurt (business),â€ Tom Bendele, owner of Falcon Lake Tackle, said. â€œItâ€™s showing that even women are out there fishing and itâ€™s fine.â€ Bendele said his business has been very slow in recent months, but is beginning to pick up slightly.

> Shirley Bell, 76, is the oldest contestant in the tournament and is currently in first place. She has been fishing Falcon Lake in her own boat for 23 years and said she hopes her group of gals can prove that itâ€™s safe. â€œThe community is suffering,â€ she said. â€œWe just want some positive vibes here.â€